It's your computer, not ours – but we may go ahead and update it for you, says team

The Linux Mint team has introduced a fix for a memory leak it does not fully understand: restarting the Cinnamon desktop.

Cinnamon is a desktop environment which began as a fork of GNOME 3 and is developed primarily for Linux Mint, though there are also non-Cinnamon flavours of Mint, using MATE (based on GNOME 2) or the lightweight XFCE.

The memory usage for Linux Mint is meant to be “between 80MB to 1GB” according to founder Clem Lefebvre’s latest post; but there are cases where memory consumption continues to grow, even when the operating system is sitting idle, consuming “2GB, 4GB, 6GB of RAM. We don’t know what causes these leaks yet but we’ll have a workaround in Cinnamon 5.0,” he said.

It would be better to fix the leak, he acknowledged, but “we’re unable to reproduce the issue.”

The workaround is rather simple. In settings, users can set a maximum amount of RAM, and if exceeded, the Cinnamon process will restart itself. “You won’t lose your session or your windows, it will just be unresponsive for about a second,” Lefebvre promised.

Windows users who have resorted to restarting the Explorer process using Task Manager will have seen a similar result.

The similarities with Windows continue in an update to a recent post complaining about users being slow to patch security issues. “In the next release, the [Update] Manager won’t just look for available updates, it will also keep track of particular metrics and be able to detect cases where updates are overlooked,” said Lefebvre. “In some cases the Update Manager will be able to remind you to apply updates. In a few of them it might even insist.” 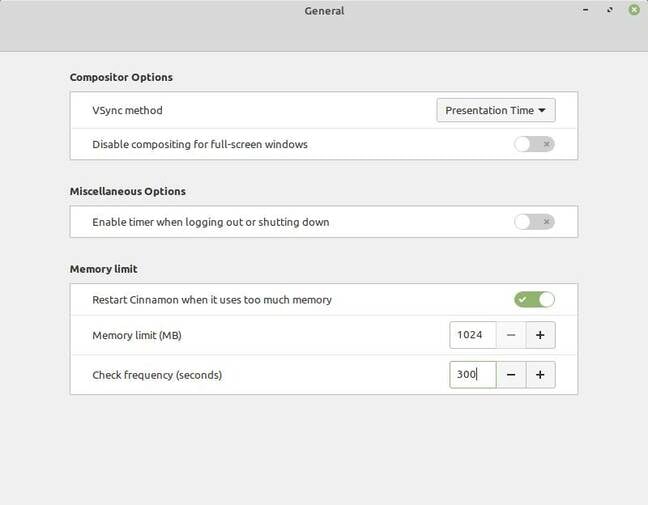 The workaround for insoluble memory leaks in Cinnamon: an option to restart the process when a limit is reached

A step too far?

The one thing that is certain is that the update manager will make use of more metrics, such as for how many days a particular update has been shown, and the last time updates were applied.

Lebrevre also described a tricky issue caused by optional system merging in Linux Mint 20.1, the current version, which is based on Ubuntu 20.4. Merging means that file locations are simplified, so that some locations such as /bin and /usr/bin are merged, with symbolic links so that applications that look for files in the old location still work.

The team is “developing internal tools ASAP to tackle this,” said Lebrevre.

Users of the current 20.1 release need not wait for some fixes. Packages released last week for a number of projects will fix various issues, including delayed login, “many usability and niche issues related to favorites,” and memory leaks in the Nemo file manager. ®

Meanwhile, no one is thinking of the horrible emissions coming out of all these rockets, say scientists
Science6 Feb 2023 | 2

Who, Me? In the age of tractor-fed printers and perforated paper, telling a junior to tear it up was close to negligence
On-Prem6 Feb 2023 | 51