It has been 40 years since the launch of Sinclair's ZX81, a device that welcomed countless Brits to the delights of home computing at the dawn of the 1980s.

Released on 5 March 1981, the ZX81 was the successor to 1980's ZX80 and, like its predecessor, was based around a Z80 CPU. Both machines also featured 1KB of memory and required a UHF television to display the monochrome output. 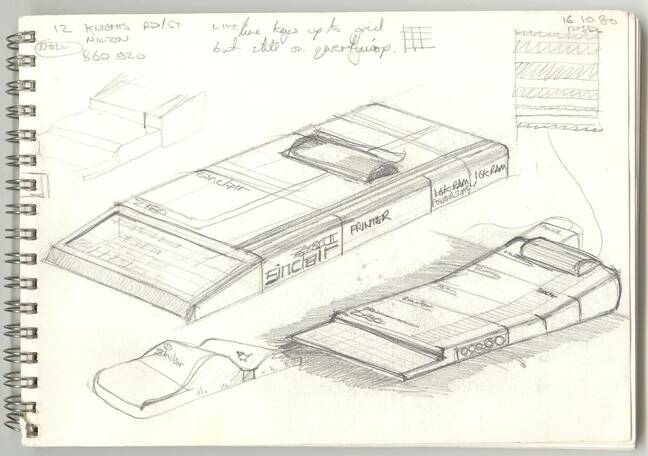 Rick Dickinson shared this sketch on Flickr, explaining it was "how I imagined the ZX81 to be an expandable range of boxes following a vaguely modular approach with a common width." Pic: CC 2.0

The ZX81 was, however, a far sleeker affair than its white plastic-encased stablemate. A Rick Dickinson-designed case made for a more consumer-friendly computer, even if the pressure sensitive membrane of the keyboard was somewhat less easy to use. 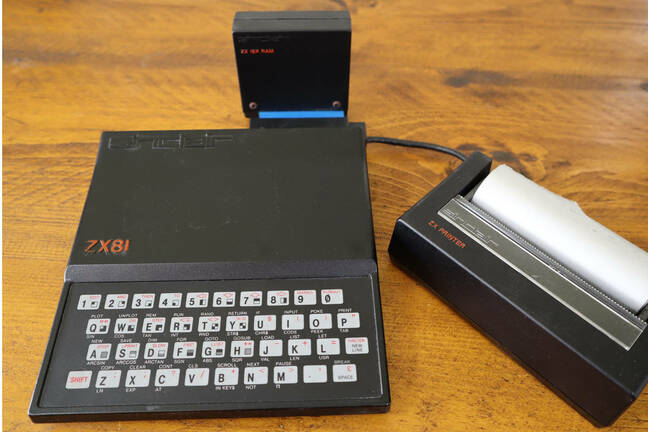 The computer came in kit form for a hair under £50 or ready-built for £69.95 and could, if you were fortunate enough to find one in the early days, be picked up from UK high street stores such as WH Smiths, whose advert at the time enthused: "You'll be surprised at how much you can do with a personal computer and even more surprised at how little it costs."

Its lack of colour graphics, sound or storage compared to other hardware launched in 1981 paled into insignificance when one considered the prodigiously low price. 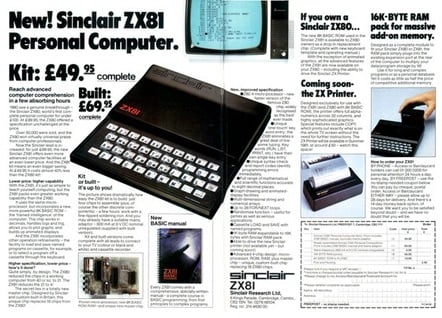 Raspberry Pi founder Eben Upton told us: "The ZX81 was the first computer I ever owned," before admitting that he never managed to get his hand-me-down computer to display anything on the screen – doubtless another victim of Sinclair's drive to keep costs down on the connector front."

Founder of the Centre for Computer History Jason Fitzpatrick also recalled the plastic slab being his first introduction to the computing world and constructing it from kit form with the aid of his father: "I can't remember how long it took to get it [the kit]," he told us, "but it was more than the time they said in the advert."

"It was a kind of crowdfunding before crowdfunding existed," he said in reference to some of the challenges faced by consumers in getting hold of the hardware they'd paid for.

In spite of the clear limitations of the machine, "we made it do quite a lot," Fitzpatrick recalled, "and it didn't really matter, in my opinion, it didn't matter what it could do. It was kind of irrelevant. And I've got a feeling to Sinclair as well, it was kind of irrelevant what the thing could do. It was for a lot of people, their first introduction to computing and what a personal computer would be."

Fitzpatrick recalled the excitement of the era, the tapping in of code printed in magazines and of game cassette inlays featuring visuals of which the humble Sinclair was patently incapable. He also remembered the pain of persuading peripherals to work, notably the infamous 16KB RAM pack. 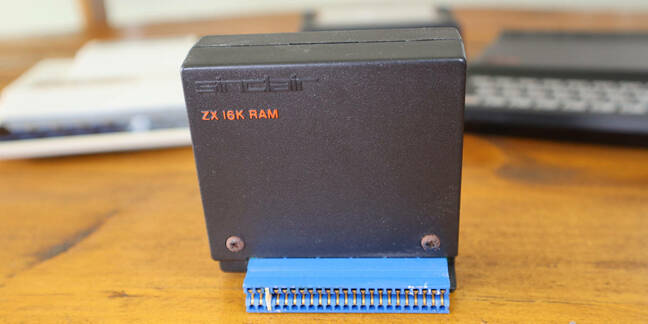 It had some simple sockets on the side, but for the real fun an edge connector was exposed at the rear. "For something like RAM, that's not the best way to connect it," Fitzpatrick understated. Some dealt with the RAM pack with the assistance of blu-tack, others, like Fitzpatrick's father, crafted a strap-like affair to stop the notorious block from flapping around and causing an undesired reset.

Wobbly connector aside, Upton also paid tribute to the design ethos of the Sinclair hardware, noting that while the Raspberry Pi is often talked about in conjunction with the BBC Micro, "in some ways we owe more to the aggressive 'design to cost' philosophy of the Sinclair machines."

The BBC Micro would launch toward the end of 1981, and the rivalry between Acorn and Sinclair has been well documented over the years, including a dramatization in the form of the BBC's Micro Men.

It is also possible to run up a ZX81 emulator on variety of modern hardware. The $4 Pi Pico has been spotted doing BBC Micro emulation and The Register understands that something for Sinclair fans is on the way.

You can't beat the real thing, however. Fitzpatrick pointed out that the Centre for Computing History had a number of the devices, including some featuring creative modifications to overcome limitations like that keyboard. "There's always one on display," he said, "there's never a display without a ZX81."

Describing the computer as a "brilliant" bit of British engineering, Fitzpatrick enthused: "Just to come up with this idea to say, 'right, we're going to make one of these things, and it's going to be at this price point' was really important.

"Without the ZX81 you don't have the Spectrum. I can't rate it higher in terms of importance."

A volunteer at The National Museum of Computing, PJ, recalled the excitement of commandeering the family TV and, while he never got to sample the delights of the RAM pack, recalled dealing with a dodgy power connector with that assistance of sellotape. "As a result of the many donations from schools," he told us, "over the years TNMoC has amassed enough ZX81s to, as a fellow volunteer put it, 'tile a small bathroom'."

As well as plans for running a home heating system from the device, a number of oddities have turned up including one dubbed 'Bluto'. "This one machine," said PJ, "was so crammed full of expansions we struggled to identify all the various cards connected up.

"This completely self-contained Frankenputer brought together the motherboard, PSU, RAM pack and a mysterious unmarked expansion card. These sat in case that house[d] a full-size mechanical keyboard and printer. There was even built-in cooling.

"We would love to know who built this and what it was used for. If that person is out there, we'd like them to know that Bluto is still fully working and carefully stored at The National Museum of Computing." ® 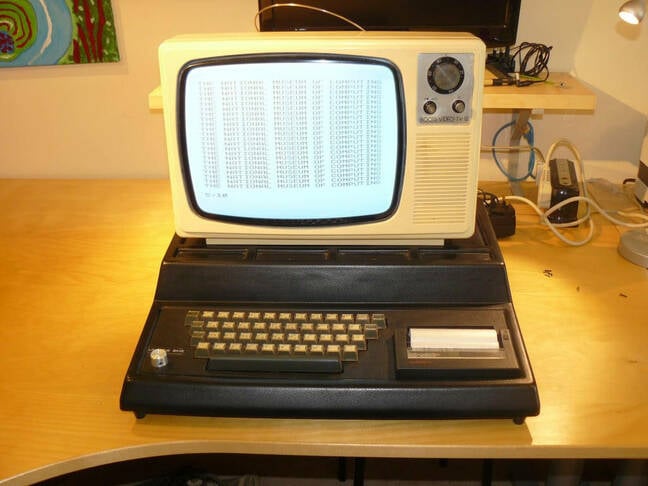 Above and below: Frankenstein's ZX81 (click to enlarge.) Pics courtesy The National Museum of Computing 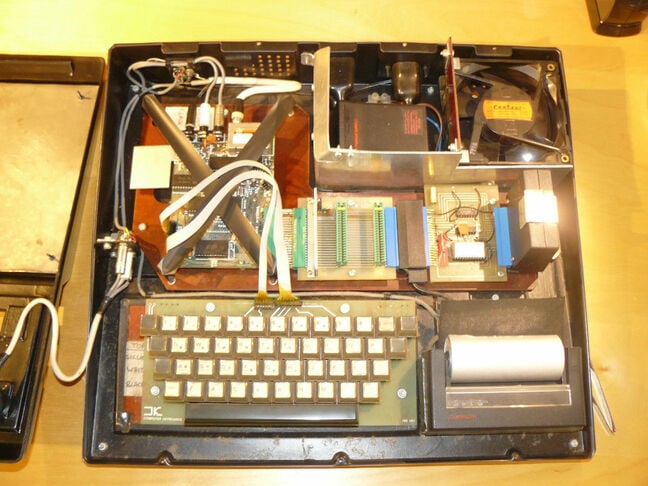