The vehicle went four whole meters forward, turned 150 degrees to the left, then moved another two-and-a-half meters. The entire drive covered a whopping 6.5 m (21.3 feet) across Martian terrain. The journey took about 33 minutes.

The Register ran that through a calculator and deduces the nuclear powered laser-equipped space tank, aka Perseverance, sped along at the astounding velocity of .01km/h, quite a comedown from the 19,310 km/h at which it entered the red planet’s atmosphere.

In a press release, NASA said:

The drive served as a mobility test that marks just one of many milestones as team members check out and calibrate every system, subsystem, and instrument on Perseverance. Once the rover begins pursuing its science goals, regular commutes extending 656 feet (200 meters) or more are expected.

Although scientific naming of places and objects in the solar system are the job of the International Astronomical Union, its typical for the scientists on projects to give geological features nicknames that often end up being used in scientific papers. 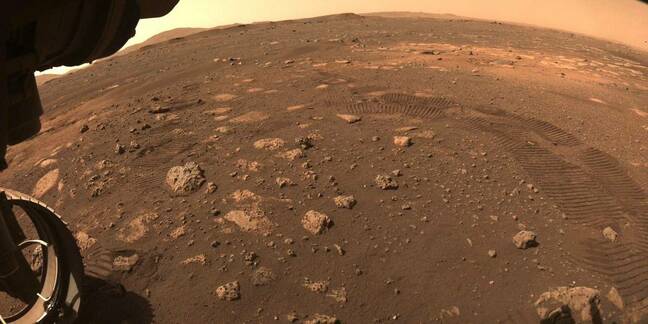 “Butler’s protagonists embody determination and inventiveness, making her a perfect fit for the Perseverance rover mission and its theme of overcoming challenges,” said Kathryn Stack Morgan, deputy project scientist for Perseverance in NASA’s press release. “Butler inspired and influenced the planetary science community and many beyond, including those typically under-represented in STEM fields.”

Butler was a pioneering Science Fiction author and one of few black women to achieve prominence in the field during the 1970s and 1980s.

Across her career she won all of Science Fiction’s big prizes -her 1984 short story “Bloodchild” won the Hugo, Nebula and Locus Awards.

Her Patternist series explored how mental powers could shape human society, and over its course saw a domineering man defeated by a more pluralist society. The Xenogenesis trilogy offered a first contact story in which human consciousness was treated as fit only to be integrated into an invading society, and Earth treated as little more than a source of interesting DNA.