But relies on integrated graphics, and what's the serial port for?

Perhaps the only element of Huawei's consumer business that's emerged unscathed from US sanctions has been its PC line. With the Chinese tech giant's computer supply chain intact, it has been business as usual, and the company just introduced its first desktop PC beyond mainland China.

Specs-wise, there isn't much to write home about. The Huawei MateStation S uses a six-core Ryzen 5 4600G processor, first released in July of last year. There's no mention of a discrete GPU, with the machine instead relying on the AMD Radeon RX Vega 7 integrated graphics.

As you'd expect given the desktop form factor, upgradability is decent, with room for two M.2 PCIe drives and two DDR4 SO-DIMM sticks, these populated with a single 256GB drive and 8GB of DDR4 3200MHz memory.

Still, the machine is compact, and Huawei described it as "like your favourite coffee table book." It measures 9cm at its widest part, and is 29cm tall. 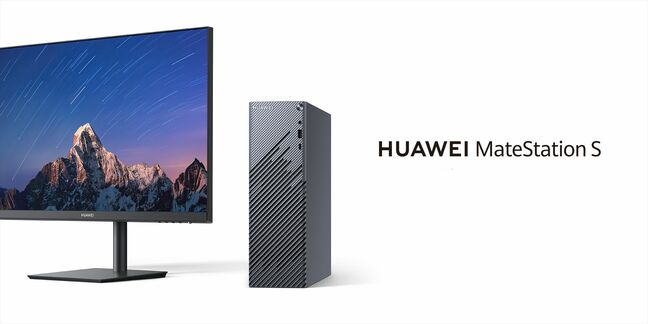 For connectivity, the MateStation S has built-in 802.11ac dual-band Wi-Fi and Bluetooth 5.0, as well as Ethernet. To add peripherals, punters get four USB-A slots (two USB 2.0, and two high-speed USB 3.2) on the rear of the machine, with a single USB-C and USB-A 3.2 port situated on the front.

Display output comes via a single HDMI port, with VGA included for older displays. Curiously, there's also an unspecified serial port included, suggesting this machine may find a home in industrial environments. From our perspective, it looks like a standard 9-pin RS-232 or RS-422 port, although it's hard to say for certain. We've asked Huawei for more information.

Huawei has seen fit to include a monitor, rather than use the BYOKMD (bring your own keyboard, mouse, and display) approach favoured by other vendors. With 23.8 inches of real estate and a reported 90 per cent screen-to-body ratio, this shouldn't occupy too much desk space and is a bit on the poky side.

There's also an optional smart keyboard, which includes a fingerprint reader, as well as support for Huawei Share. This feature, included on most of the firm's devices released in the past few years, allows users to upload files and photos to a computer by "tapping" their phone against an NFC reader. In terms of layout, the keyboard uses a standard chicklet design, with a claimed 2.5mm of key travel.

To date, Huawei's traditional PC output beyond China has consisted entirely of laptops. A significant chunk of these – namely the MateBook X and MateBook X Pro – were targeted at the premium end of the market, with the MateBook D and 14 aimed at the middle ground. Prior to November, Huawei also sold laptops via its Honor sub-brand, including the MagicBook 14 and MagicBook Pro.

The addition of a desktop into the firm's line-up is therefore a new development. It's also curious given the long-standing decline of the desktop form factor. Sales of desktop PCs have slumped year-on-year in the decade between 2010 and 2020, according to aggregated shipment figures from Canalys.

Desktops are forecast to grow by 21.6 per cent in Western Europe during Q1, which IDC attributes to a rise in PC gaming. The absence of discrete graphics means the MateStation S is ill-suited for this.

The machine is currently listed on Huawei's Malaysian store, suggesting this will be the machine's first international test market. We've asked Huawei about UK availability and pricing. ®