We can't avoid it any longer. Here's a story about the NFT mania... aka someone bought a JPEG for $69m in Ether

How can we put this? Imagine beanie babies were screenshots that needed their own power plant

Updated NFTs – or non-fungible tokens, a newfangled way to trade virtual assets – truly exploded into the mainstream on Thursday when Christie’s auctioned off its first-ever NFT digital artwork for $69,346,250. Not a typo.

That's perhaps a lot to unpack. An NFT is a unique string of numbers and characters that act as a digital certificate proving ownership of a particular item. The token is published on a blockchain to record this ownership, and the token can be later transferred to another person. The chain of ownership is indelibly reflected in the token's blockchain. The value lies in how much you can sell the token for to the next person.

You can make an NFT for pretty much anything – and ideally something someone wants to pay for. Digital artwork, music, the written word, whatever can be represented as a token. In the case of the $69m artwork: it's a giant JPEG. It's a big picture. Like all NFT assets, it exists outside the blockchain. You can see a preview of it here. Someone bought, presumably, the full thing for tens of millions in cryptocurrency, and got a receipt in a blockchain to prove it. That's it.

In general, the creator of such NFT works can retain the copyright if they wish. The asset might even already be public, or sold separately like, say, on iTunes. Again, NFTs are a hyped up, cryptographic way of proving you own an official copy of something. Using an append-only log of receipts that consumes a non-trivial amount of energy.

The craze has been bubbling along as celebrities, musicians, and tech moguls made NFTs out of stuff like individual public tweets and albums. It hit another level, though, with the sale of a JPEG file titled "Everydays: The First 5000 Days," deemed to be worth, we say again, $69m (£49.3m) in the cryptocurrency Ether when it was auctioned off this week.

Want to roll like one of the biggest minds in physics? Prof Stephen Hawking's wheelchair is up for auction

“The artist has stitched together recurring themes and color schemes to create an aesthetic whole,” Christie’s stated. “Organized in loose chronological order, zooming in on individual pieces reveals abstract, fantastical, grotesque, and absurd pictures, alongside current events and deeply personal moments. Society’s obsession with and fear of technology; the desire for and resentment of wealth; and America’s recent political turbulence appear frequently throughout the work.”

Each rectangle is a drawing by artist Mike Winkelmann, aka Beeple: he's said to have produced a sketch pretty much every day since 2007, and so the assembled collage of these pictures sold off this week represents years of work. Zoom in and you’ll find pretty dark stuff, such a picture of Michael Jackson’s face split in half next to Kim Jong Un’s face also split in half. There's also cartoon characters, futuristic-looking emblems, monsters, glowing orbs... what can we say? Art is art. 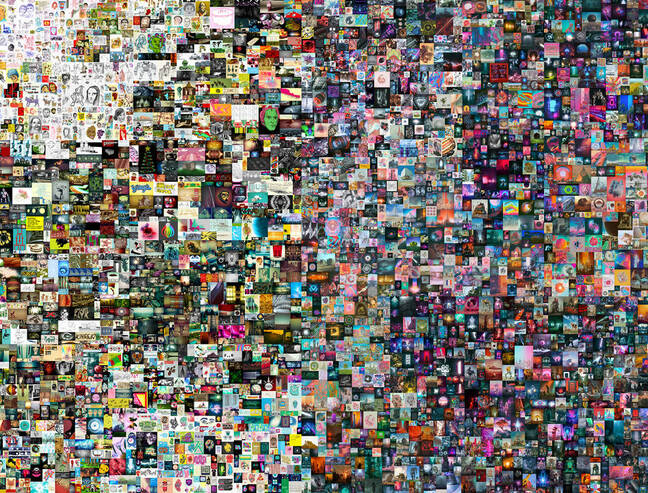 Totally worth it ... the $69m picture. Source: Christie's

Is Winkelmann trying to make an artistic statement about technology in general, just cashing in on the weird world of crypto, or making a visual version of the aristocrats joke?

“Yeah I have no f*****g clue what I'm doing here, man,” he said quite frankly on his personal site.

"I've been down the rabbit hole of cryptoart for all of about 2 months (though to be fair in this space that is like 6 f*****g years) so I'm very much just making this s**t up as i go!!!! I will say this though, I honestly don't think I've ever felt this inspired or excited to be creating.

"Everyone in this space is god damn smart as f**k and so passionate that it just has this amazing energy. It feels like we're at the start of something really special and we all get to be a part of making the rules. I am truly humbled and honored to be a small part of that!!"

The buyer of the $69m NFT artwork is a founder and financier of an NFT fund...