Xiaomi didn't turn the glue up to 11 on its new Mi flagship, but still gets low marks for repairability

Yep. Gadget botherers had to haul out a 'specialist tool'

Released in China last year, and about to drop in the UK, the Xiaomi Mi 11 drew attention because of its status as the debut device for the Qualcomm Snapdragon 888 chipset. Now it has got the interest of right-to-repair campaigners iFixit for different reasons altogether.

And boy, was this latest teardown a mixed bag. Contradictory, even. On the one hand, Xiaomi made some servicing tasks – like replacing the battery – relatively straightforward, using simple adhesive pull-tabs rather than glue that must be dissolved with a solvent or strong isopropyl alcohol. Getting to the battery was a different matter, however, with iFixit's crew bemoaning a “tedious” process that required the delicate removal of multiple flex cables and antenna wires.

Xiaomi a Snapdragon 888 flagship for €749: Yep, the Mi 11 is rolling out to world outside China

The display? Xiaomi chose to use a curved “infinity edge” screen, which, although pleasant to look at, proved to be a nightmare to detach. While a standard screen may be removed with something as simple as a spudger, iFixit was forced to resort to a specialist tool. The techies also correctly noted that curved screens tend to be delicate to remove, with a greater likelihood of splintering during excision.

iFixit pointed out that some repairs, such as the replacement of the under-screen fingerprint reader, required the removal of the display. And while this isn't typically a fault-prone component (you're far more likely to need to replace the battery or screen), it's still a bit annoying. 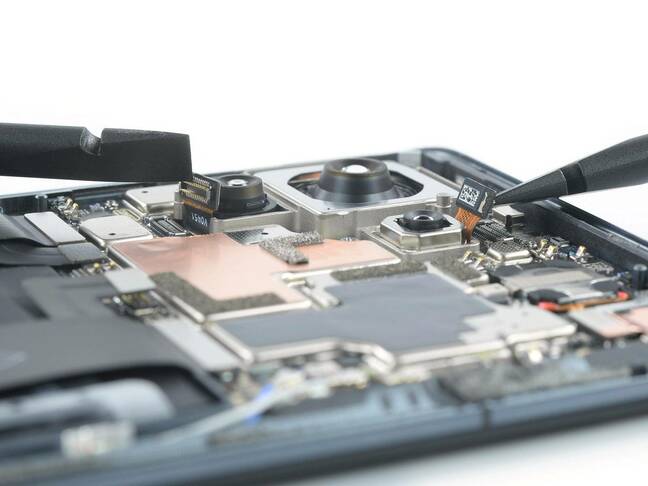 The glass back of the Mi 11 added an element of risk, especially to smartphone owners who are prone to dropping their devices. Fortunately, replacements shouldn't prove too tricky, and Xiaomi used only a modest amount of glue. This allowed iFixit to yank it free without using any heat – a simple opening tool proved sufficient.

iFixit gave the Mi 11 a modest score of 4 out of 10. Not bad (the Samsung Galaxy S21 Ultra scored a dismal three), but not amazing, especially when compared to the iPhone 12 family, which scored six.

Xiaomi won plaudits for its use of modular components, standard Philips screws, and general lack of adhesive, but these were largely nullified by the construction of the display, which the the iFixit techies found was not conducive to long-term servicing.

The notion of repairability is largely subjective (just ask Apple) and it's not something consumers regularly consider when buying kit. But as some customers increasingly hold off on upgrading their devices (per Gartner's figures, the average wait is between 2.5 and 2.8 years), and more become conscious of the environmental impact of manufacturing new devices, this may change. ®