On paper, Milan is a continuation of Rome, and evidence that AMD can ship chips to enterprises and clouds more than anything else. AMD reckons its Zen 3 architecture is 19 per cent faster than Zen 2.

AMD's Lisa Su: Our processor sales are Ryzen faster than the PC market is growing

Unlike Rome, Milan has eight CPU cores and 32MB of shared cache per core complex, double the previous generation. Milan brings to the Epyc series support for shadow stacks to help thwart exploits that use return-orientated programming and similar techniques (Intel has similar tech.)

Milan also introduces, as part of its encrypted virtualization feature set, secure nested paging [PDF], which is designed to protect guest OSes from malicious snooping hypervisors. This is aimed at clouds that want or need to give customers some peace of mind.

Below is the pipeline diagram for the Zen 3 architecture inside Milan. There's 32KB of instruction and 32KB of data cache per CPU core, as well as 512KB of L2 cache, and up to six operations per cycle can be fed into the integer or floating-point engines. 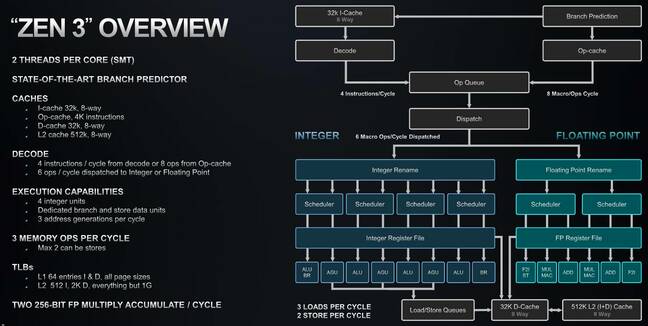 Pipeline of the Zen 3 architecture ... Click to enlarge
Slides supplied by AMD

Compared to Zen 2, the third generation has an operation queue and dispatcher rather than a micro-op queue approach, and has an improved branch prediction system. That basically means the chip is able to keep itself busier and run code faster by anticipating the path of execution through an application.

The Epyc 7003-series processors are said to be available to order now. Amazon Web Services, Google Cloud, and Microsoft Azure are among the hyperscalers deploying or will deploy the chips for customers. System builders, such as Dell, HPE, and Lenovo, will offer the processor family, too, we're told.

For analysis and commentary, check out this coverage by our sister site The Next Platform. "This is the X86 server processor that customers no doubt will wish AMD had delivered many, many years ago," notes TNP's Timothy Prickett Morgan. ®