'This is of historical interest. Adobe isn’t really worried about this, it is automation'

The chief security officer for F-Secure, Mikko Hyppönen, had a Twitter account suspended after linking to a download of Adobe Acrobat for DOS, first released in 1993.

Curiously, the tweet that attracted the Digital Millennium Copyright Act (DMCA) takedown notice was a retweet of a post made five years ago, the original of which has not been taken down. But what was Hypponen doing tweeting links to dodgy Adobe software downloads?

"Good question," he told us. "Why would you tweet about something so esoteric and weird and old? Five years ago I was trying to figure out something specific about PDF file structure and looking at PDF standards – because the standard for the PDF file format is 900 pages, I shit you not. 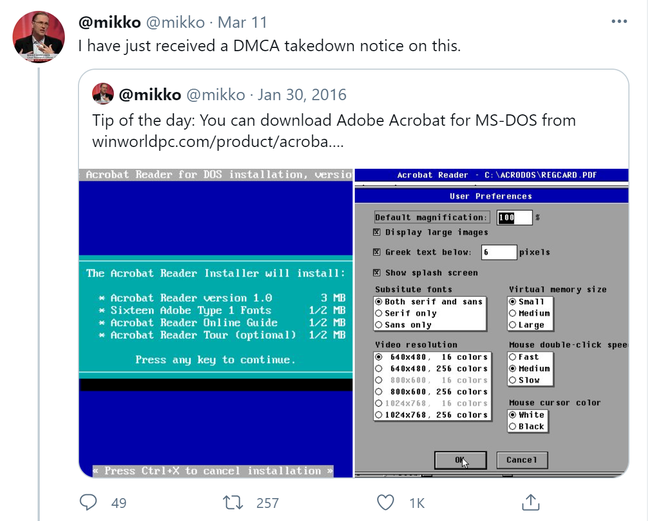 "If you buy it from ISO it will cost you 150 euros, which sucks, and while I was doing that I realised that it was started in the time of MS-DOS. So I googled for MS-DOS Adobe and I found the original reader from 27 years ago and the fact that it was still available on this download site. So I tweeted about it."

Fair enough. The Adobe tweet duly came round again, but not for long. "It was picked up by I'm guessing automation from a company which does DCMA requests for Adobe," said Hyppönen. "I noticed that my bot was dead. I looked into the account and I was prompted with a warning that you've been naughty and you've breached copyright and there's a claim on your account and you have to delete the infringing tweet or your account will be removed."

What did he do? "I deleted the tweet and my bot was resurrected," he said. He considered that "it seems a bit harsh" to be penalised for the link, but understands that he accepted Twitter's terms when he started using the service. "I'm not sharing anything, I'm linking to a website which does the sharing," he said.

Bearing in mind that F-Secure is also a software company, should he not respect Adobe's copyright, even on an old application? "Is that [download] site doing something bad? No. Is it doing something which might breach the copyright of Adobe? Maybe. There is a license agreement... I reinstalled it, and it actually requires a license key, it is a commercial product... but this doesn't make any sense when you have software from over 25 years ago running on a platform nobody has used for 20 years. This is of historical interest. Adobe isn't really worried about this, it is an automation. I haven't heard anything from the agency doing these claims or from Adobe themselves."

Hyppönen clarified that he understands there are cases where copyright on old software is important, such as with a Super Mario Bros game from the 1980s, but "there's tons of stuff which is not in actual use by anyone, there's no productive value, and those in my view belong more in a museum than in being aggressively policed.

"This is why I like initiatives like Internet Archive, the fact that we have players on the internet which are actively trying to preserve our digital history and ready to fight to make sure that this part of our culture will stay available for future generations to study and enjoy."

When it comes to document readers, there is another point, which is that we may need them to render files that are otherwise inaccessible. "I think it's perfectly plausible that there are some old funky PDF files which may be using some version or features of the PDF which current readers do not support," Hypponen said. ®