Burgers, birds, and Blue Screens of Death: Remember the joys of commuting?

Bork!Bork!Bork! Bork disappears up its own fundament today with a return to the place where it all began – a BSOD at London Victoria Station.

Pedants might point out that "where it all began" was actually a heaving McDonald's within the cathedral to public transport, but a BSOD is a BSOD regardless. The latest example of the breed, sent to us by Hesan Yousif, is gracing an information screen on the station concourse rather than one of the panels that used to be pawed by customers seeking greasy delights.

The deserted station makes us feel a little nostalgic. The stench of an on-train burger, which still lingers in the nostrils a year after commuting ended, perhaps less so. 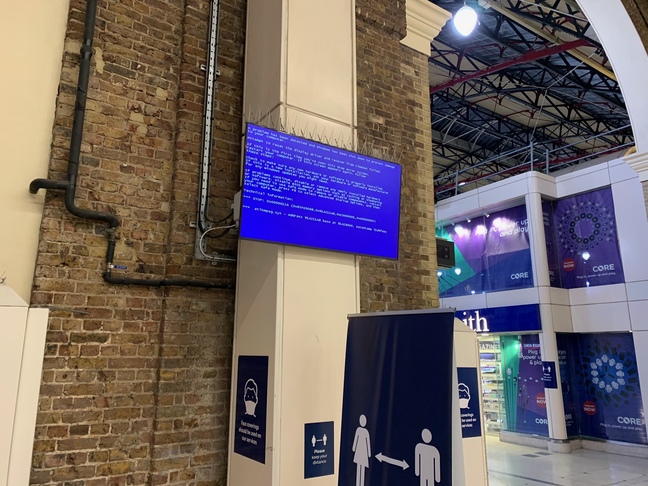 While the McDonald's BSOD looked audio-related, the latest offender is atikmpag.sys and a failure to reset the driver. A reboot might mend things, or perhaps a reinstall of the unhappy driver. Or, possibly, the hardware behind the scenes has given up the ghost. Lacking remote access or a step-ladder, our eagle-eyed reader was powerless to help.

Whatever the issue, Windows has reacted to the problem with all the grace and dignity of a drunk discovering that the toilets are out of order on the 23:25 London-Brighton train.

While passenger footfall might be down on where it was in 2019, Victoria Station remains a haven for birdlife (even if the scraps of food left by passengers are lighter on the ground these days). Spikes have been erected on top of the screen to stop passing pigeons landing and relieving themselves down the front of the display.

There's possibly a comparison to be made with what Microsoft's software dribbles down screens, but we're far too classy to go there. The spiky protrusions have failed to fend off digital failure regardless.

It has been an interesting 14 months which have demonstrated, if nothing else, that even with much of the world shut down, Windows (and it does seem to be all too often Windows) retains its Gates-given ability to drop its underwear on screens big and small.

Perhaps now might therefore be a good time to pull down the shutters on this inexplicably long-running feature.

Unless, of course, you've spotted something madder than a bag of Windows Phone fans on a nearby billboard or bus shelter. ®