Most intimate snap yet of M87's supermassive abyss

Pic + video Astronomers have captured the most detailed image yet of a supermassive black hole, demonstrating at an intimate level how its magnetic field polarizes light from the phenomenon.

The first-ever direct image of a black hole, unveiled in 2019, showed the silhouette of the giant 6.5-billion-solar-mass void at the center of M87, a galaxy more than 50 million light-years away. It was snapped using the Event Horizon Telescope (EHT), an array of eight ground-based radio telescopes dotted around Earth. And now astronomers have used the equipment to capture and share a fresh view of the same hole.

The black hole's magnetic field polarizes the electromagnetic radiation from the hot halo of plasma circling the phenomenon. Scientists can measure this polarization to thus plot M87's magnetic field from millions of light-years away. This information may in turn help us figure out how and why the black hole ejects gigantic jets of radiation and matter from its core.

“This work is a major milestone: the polarisation of light carries information that allows us to better understand the physics behind the image we saw in April 2019, which was not possible before," said Iván Martí-Vidal, coordinator of the EHT’s Polarimetry Working Group and a distinguished researcher at the Universitat de València, on Wednesday. The research work is described in two papers published in the Astrophysical Journal this month. 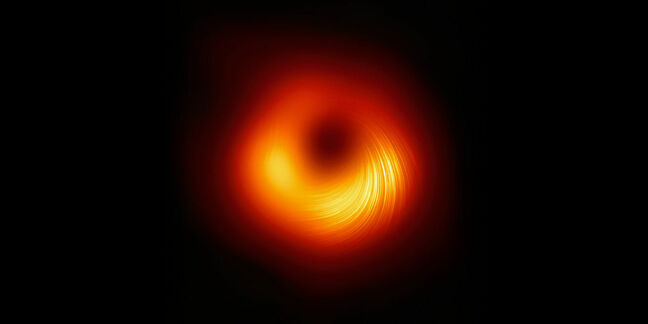 Note in the above picture the straight lines caused by the magnetic field, absent from the 2019 snap.

Here's a video from the European Southern Observatory et al illustrating how far we had to peer into space to observe the supermassive black hole:

“While the polarization and magnetic fields have been mapped in the past at large scales in the M87 jet,” Gopal Narayanan, a research professor at America's University of Massachusetts Amherst, told The Register, "this is the first time we have mapped details of the magnetic field at extraordinary angular resolution, zooming all the way into the very base of this jet, at distances very close to the event horizon of this supermassive black hole."

By the M87 jet, he means this long trail [11MB PDF] of material from the black hole. Exactly how these jets are formed is still unknown, though these findings may help shed some light (no pun intended.) “Jets are ubiquitous phenomena in all of astrophysics, and these observations will inform models of generation and confinement of such astrophysical jets,” Narayanan added.

The strength of the magnetic field around the M87 black hole is estimated to be anywhere from 1 to 30 Gauss; Earth generates up to 0.65 G at its surface, and 25 G at its core, to put it into perspective. The team believes the field keeps the halo of plasma together, and counteracts the black hole’s gravitational field. Only the wisps of gas that are pulled past the object’s event horizon are sucked into the void. The rest of the matter is compressed into an accretion ring around the black hole that circulates at close to the speed of light.

“We have learnt thus far from this latest work that the emission is very highly magnetized near the event horizon,” Narayanan told us.

"That allows us to evaluate different models of accretion into the black hole, and jet launching mechanisms. The data already reveals that the magnetic field structure evolves in time. Over very long time scales the matter will indeed fall into the black hole. Future observations with the next generation EHT will allow us to construct movies of the time variability of emission and magnetic fields around supermassive black holes."

The team have also been imaging Sagittarius A*, a black hole at the center of the Milky Way. ®