Let's go round again, maybe we'll turn back the hands of time

The RPG Greetings, traveller, and welcome back to The Register Plays Games, our monthly gaming column. This edition we are once again sticking with the indie scene as it's genuinely churning out the most interesting stuff as 2021 coughs and splutters along. Two games this time, both based on a "genre" of sorts that is almost as old as gaming itself.

We briefly explored the term "roguelike" when we stepped into the Darkest Dungeon almost two years ago now. It derives from Rogue, an ASCII freeware game developed for Unix systems in 1980 that was all about crawling through procedurally generated dungeons and slaying the monsters therein. Notably, there was "permadeath" – if you died, you lost all your progress and went back to the beginning.

Its influence can be felt to this day, particularly in light of the fact that small studios or even lone wolves can develop a similar sort of game and sell millions of copies. Some popular recent examples include The Binding of Isaac, FTL, and, of course, Darkest Dungeon.

What makes something roguelike is fairly fluid so you can end up with games that appeal to the legacy but feel completely different. The Berlin Interpretation, which was agreed upon at the International Roguelike Development Conference in 2008, outlines some defining low and high-value factors, but states that missing a factor does not disqualify a game from being roguelike, nor does possessing one make it roguelike.

When a developer takes more design liberties, a game can then be called "roguelite", which is probably what we have here with Hades, released towards the end of 2020, and Loop Hero, which came out this month. Both can be described as roguelike but are almost nothing alike themselves.

Hades dropped last September into the arms of a waiting audience, given that it was produced by Supergiant Games of Bastion, Transistor, and Pyre fame – all of which were critically lauded in their day – and had been incubating in early access form since 2018.

It follows Zagreus, prince of the Greek underworld, a rebellious youngster who has had enough of his ball-busting dad, the titular death god, and wants to escape his realm to join relatives on Mount Olympus, seat of Ancient Greece's pantheon.

For the realm of the dead, Hades can be cosy

Old Dad isn't thrilled by the idea so the way out is infested with monsters. Zagreus fights through the labyrinth one chamber (pretty much a Rogue tile) at a time until he reaches the "boss" of each biome, of which there are four – Tartarus, Asphodel, Elysium, and the Temple of Styx. 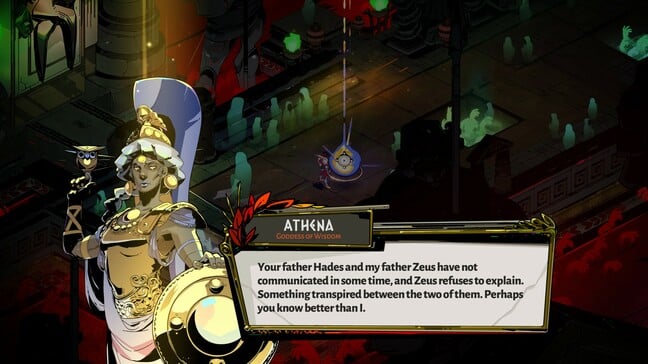 Athena is one of the first gods to offer Zagreus help

Healing doesn't come easy, and the only way is forward. As a result, Zagreus dies. A lot. When that happens, it's initially galling to discover that the precocious prince is transported right back to Hades' throne, which acts as a hub area. As you progress and win more resources, the hub can be upgraded in various ways to bring benefits, but as soon as you step out that door from Zagreus's messy room – yep – you're starting a new run all the way from the beginning. 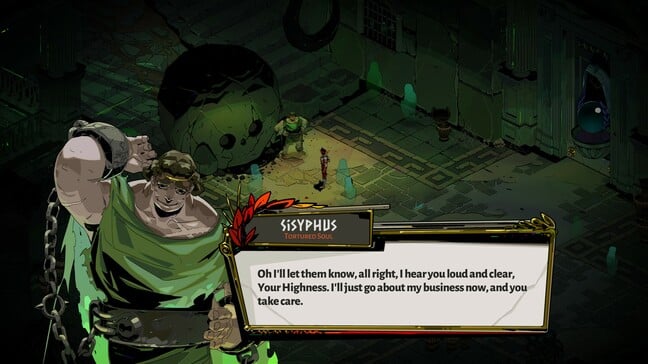 With each fresh start, Hades is rearranged. Chamber designs, though fixed, come in a randomised order filled with different varieties and compositions of enemies. Gold – which can be collected along the way to spend in Charon's shops on helpful items – resets to zero with each defeat, but certain resources persist beyond death to upgrade Zagreus's abilities and base, or to purchase a new weapon. This means that progress isn't totally lost when a run is cut short. Zagreus will be stronger the next time he ventures out, but then again, so will his foes. 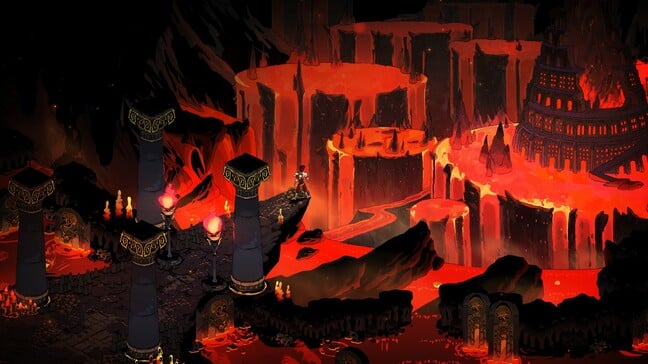 All the well-known gods and goddesses from mythology will reach out to Zagreus multiple times throughout each run to give him a choice of "boons", which can be used to tailor his combat skills. These also reset with every death so the random nature of the game means that you can end up with a totally different build to the one you had before. 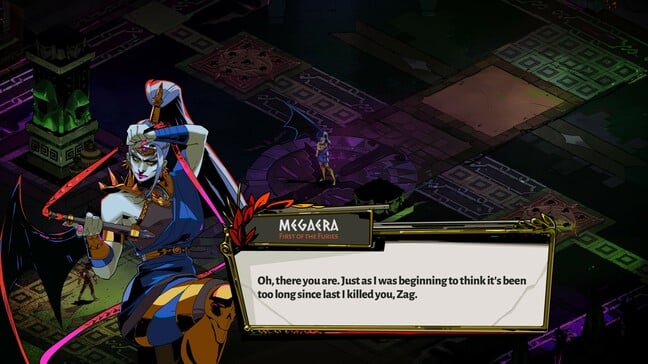 Megaera, one of the Furies, guards the exit from Tartarus

This is where the fun lies – playing the hand you are dealt and rolling with the punches until failure comes knocking. You might beat the first boss with a shred of health left, move through to Asphodel with no idea of what's ahead, die, then go straight back to the start. You've got enough keys to unlock another (potentially better) weapon, but then you need to learn to get to grips with it, which causes another death. You get back to that boss, only to find that she is now using attacks you haven't seen before… Dead again. This means that the game must ultimately be completed in one flawless run. 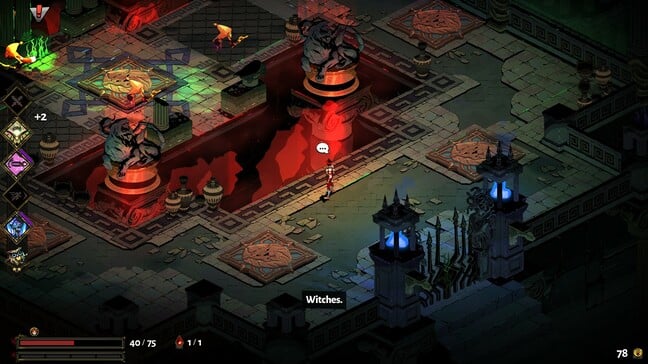 The art style is absolute class

Though this sounds frustrating, it's actually quite addictive, giving enough whiff of success to drive you forwards. "Hey, maybe I'll get some better abilities this time. Maybe the chambers will offer more useful rewards," and so on. The game also incentivises different strategies in the form of more ability points dropping if you use, for example, the Coronacht bow over the Aegis shield.

Taking place from an isometric top-down point of view with hack 'n' slash gameplay more reminiscent of Diablo or Torchlight than the turn-based combat of Rogue, it's easy to see how Hades is roguelike (or roguelite) without being "like" Rogue. Supergiant's crisp, borderline-anime art style is stunning to behold, and the extensive voice acting is perfect. All of which makes Hades a thrill to bang one's head against. Don't sleep on it like I did, but bear in mind that a controller is recommended.

On the other side of the coin is Loop Hero, a weird little game crammed into 200MB (compared to Hades' 15GB) developed by Russian boutique Four Quarters. It's a bit of a mindfuck from the start. A lich has obliterated the world, leaving only void behind. But you, the hero, have survived and you're out for revenge. 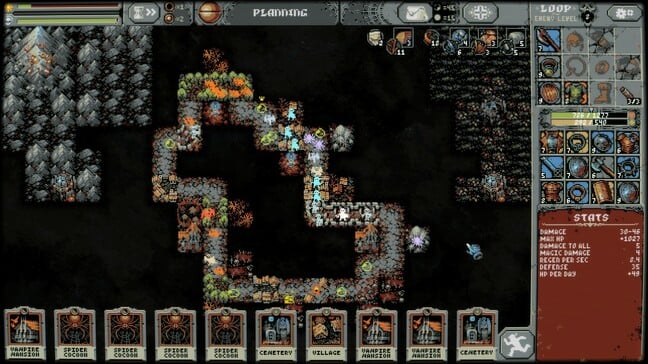 My little guy is the white blob, cards at the bottom

Unfortunately, you are doomed to trudge a procedurally generated "loop", a pathway that goes round and round and spawns monsters each day. It's barren except for your campsite, which restores health each time you pass. But by defeating enemies, you are dealt mystical cards! Placing these down on the playing field restores the world to some extent, constructing a building or environment which can both help and hinder your chances of making it around another loop. 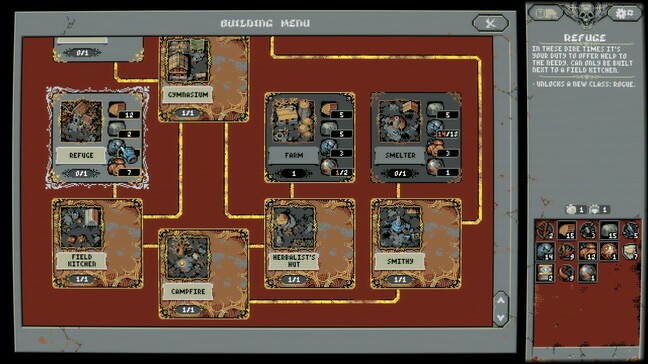 Unlike Hades, gameplay is virtually non-existent. Every action can be performed with a left or right click, making it a nice thing to chill with, beverage in hand. It also means that Loop Hero is more about the decisions you make. The more enemies you slay, the more equipment upgrades drop, which you'll need as monsters get more powerful with each loop. The more cards you play, the more monsters spawn each day so you need to strike a balance between helping your character survive each loop and making it hard enough to get decent gear. 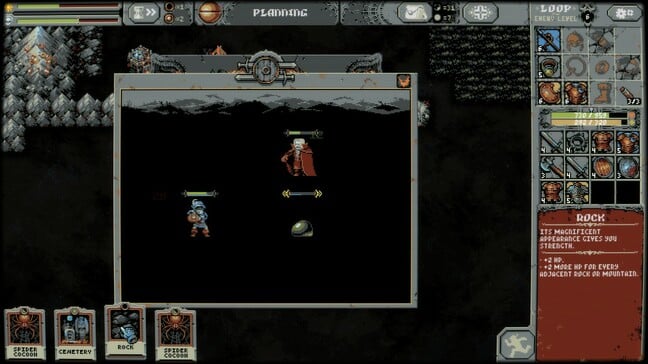 The fight scenes are reminiscent of old Final Fantasy, except you don't do anything

Eventually, the lich himself will spawn. Then you die and are returned to your base, where buildings can be upgraded to unlock more cards with new effects and camping supplies can be used to buff your hero for the next loop – and you can meet helpful characters too. The trick with the boss fights is to figure out what sort of stats on your gear will see you prevail at the end of each chapter. 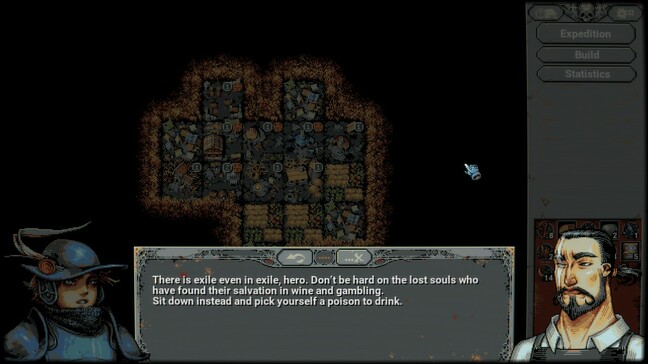 As your base grows, more characters announce themselves

You only keep 30 per cent of the items collected on each run if you perish, but retreating will keep 60 per cent. You can also leave with 100 per cent of the loot, which goes towards base upgrades, if you retreat on the campfire tile. So a loop you have made too unforgiving can be reset, and you can try again without losing anything – if you're smart.

Loop Hero's primitive appearance belies an intoxicating complexity. Unique card interactions and possible character builds encourage the player to keep exploring. The almost-passive gameplay makes it easy to sit there for hours on end fiddling with the formula and figuring out what works and what doesn't. Though the price tag might be a bit steep considering that it looks like a cross between Rogue-era and slightly less ancient SNES games, it has retro charm in buckets (including an optional CRT monitor effect) and might be worth a look if only to keep running in a window during those long, cold, lonely on-call nights. ®

The fast-paced gameplay of Hades makes it very difficult to take screenshots during combat with controller in hand. However, our vulture Rich streams regularly on Twitch as ExcellentSword (Mon, Wed, Fri, Sat from 20:30 GMT) so you can see him get to grips with the early game here if you want to get a better sense of how it actually feels. Likewise, learning Loop Hero (badly) here. He recently made Twitch affiliate so chuck him a follow if you like.