Why can’t a switch be more like a server? Nokia says it can

Sponsored Whether you’re a cloud service provider or running enterprise infrastructure, compute and storage these days should be relatively straightforward. Once the basics such as power and cooling are taken care of, your admins should be able to work with your developers to automate provision and deployment of storage and compute.

But what about networking?

Consider how the demands on your data center and networks have changed as remote working and other changes forced by Covid-19 become permanent. Now consider the likely impact of 5G, AI and IoT on traffic and workloads.

These are the challenges that Nokia has tackled with the development of the Nokia Data Center Fabric, launched last year. Nokia built the platform in conjunction with an unnamed hyperscaler which is already using the architecture in one of its own data centers.

At the heart of the platform is Nokia Service Router Linux (SR Linux), and a NetOps Development Kit (NDK) that allows operators to integrate their own and third party applications into the system. Together with the Nokia Fabric Services System and Nokia’s own merchant silicon data center switching platforms, the comms giant aims to offer data center operators the ability to operate and automate their data centers at scale, whether that’s hyperscale, webscale or enterprise scale. 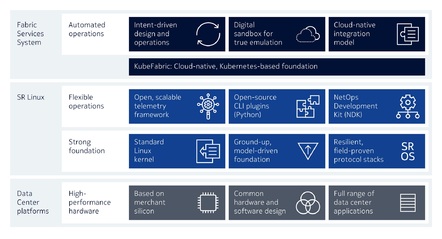 Nokia NE Americas CTO Paul Unbehagen says the approach sprang from the realization that “There’s certain things that data center operators take for granted that they don’t realize are incredibly disruptive…There's a whole lot that we've learned from the webscalers over the last 10 to 20 years, and how we've slowly been working the systems to figure out what's the best way to make them far more nimble and agile.”

Are you ready to open up that switch?

The focus on a highly automated, open software platform together with standardized, commodity-like, non-proprietary hardware mirrors what the hyperscalers have been working towards for years. At the same time, it echoes trends in the software world, where DevOps and containerization are predicated on open standards, automation and scalability.

It’s Linux on the server that allows developers and admins to exploit all the power of containers, VMs, Python scripts, DevOps tools and the ability to write to APIs. But, he continues, “The switch is running Linux now too. Why not open that up in the same exact way? The productivity levels should skyrocket.”

SR Linux “enables the on-prem environment, to function like a cloud, just like the off prem environment. So it makes the DevOps teams and the application teams’ productivity so much better. It's one functional environment for them.”

Opening up Linux in the network, as well as the server, means that “if you want to rewrite one of our core apps, go ahead, you're going to have exactly the same ability to run that app, the same way you run any application on a Linux server.”

The response from customers, says Unbehagen, is that everything they understand about managing servers, they can now apply to the switch, rather than being stymied by “this last echelon of Old World thinking” that the switch is a black box running a proprietary operating system. In traditional proprietary platforms, manufacturers will include every protocol, all of which are loaded into memory in the background. “We separate those out as applications.”

Conversely, he says, “If you don’t want to run one of our apps, it doesn’t load in memory.”

Opening up the platform allows operators to use precisely the protocols, scripts and applications they want or to produce their own. For example, he explains, “You can use our BGP, the same BGP that’s being used in service providers and internet exchanges all over the planet, or you can write your own or bring somebody else’s BGP to run natively there.”

The NDK allows network admins to create their own applications, he continues, with full YANG support, a Python-based CLI, GRPC/gNMI and JSON-RPC API. “You can have direct access to the all the chip can offer,” he explains. “That’s normally reserved just for the vendor, and they lock everybody else out, right?”

This gives the user enormous power, which might lead to some nervousness about implementing changes in the live network. So, another echo of the software world is the way the Fabric Services System helps operators to reduce the risk of designing, deploying and operating data center network fabrics through automation. Unbehagen said that the system’s digital sandbox functionality “allows us to take a complete snapshot of the existing network, hold it in a virtual environment, and then make a change and see what's going to happen before it ever goes live.”

The approach can’t eliminate every possible risk, he says, but should help take some of the abject fear out of reengineering an organization’s network infrastructure.

And organizations shouldn’t be afraid of reengineering their network infrastructure, because, as Unbehagen explains, the network is a foundational element, whether we’re talking about the cloud, 5G or delivering applications: “And because of that, we constantly need people to keep evolving their skills in the networking space. And networking needs to become an equal partner with storage and compute. A good way to think about this, is cloud is not a location. It's a design principle.”

If it feels like a leap for networking people to begin mirroring what their server and software colleagues are doing, Unbehagen says consider the nature of 5G, which is already predicated on a cloud like approach. The management systems that sit at the edge and provide phone authentication are all based on containers, he explains.

At the same time, in the core, Unbehagen explains, the data centers which are the backbone of and enable the internet rely on optical interconnects, which Nokia leads the standards for. “So, we can do 100 gig directly to the server and then 400 gig up to the aggregation and multiple 400 gigs between the data centers as well, so that our core routers can communicate directly with our optical platforms.”

Back in the data center, there’s tremendous power to leverage, once operators think past the restrictions that current network architectures impose. “Suddenly you’ve got a lot of data center switch CPUs out there with free memory,” he says. “And you can write applications that could actually use these switches as distributed compute. You could get deep telemetry, deep analytics, to pin-point what is happening in your network.”

Most enterprises need to increase their efficiency, he says, and that means automation, which will ultimately lower costs. “It’s all about increasing productivity by enabling your operations teams to do tasks faster, freeing up your highly skilled engineers to tackle other problems”

Nokia’s approach to data center network automation takes these different technology pieces and fits them together cleanly to allow operators to consume and connect switches like they do servers. So, when you ask the question, why can’t a switch be more like a server, the answer is: it can.