Ship stranded in Suez Canal shifts, but not before spawning some choice tech memes

And not just the obvious ones about containers

The ship that’s blocked the Suez Canal for almost a week has shifted.

That Ever Given moved in the early hours of Monday, Egyptian time, seems certain as footage from the scene has emerged.

Moment that Egyptian crew managed to free Vessel. Captain of crew breathing a sigh of relief, giving 👍🏽 and a “Hamdullah” (Thank goodness).

Over 300 ships 🚢 are jammed in #Suez Canal since Ever Given blocked the passage connecting Asia to Europe & US pic.twitter.com/VThiofqmwd

At the time of writing, ship-spotting site Vesselfinder depicted the Ever Given’s stern as in the centre of the canal. 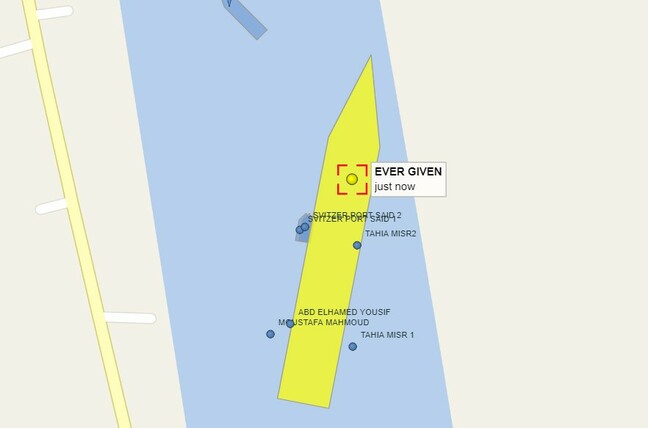 The Ever Given on Vesselfinder.
05:15AM GMT, March 29th.
Click to enlarge

But it is not yet known whether the ship is ready to move, and therefore allow other traffic to use the Suez Canal and allow global trade to resume at normal speed.

While we wait for that news, feel free to spend some time gazing at amusing memes the ship has spawned. Techie pranksters have, thankfully, managed to move on from Docker gags and container quips.

i have no idea who made this version of the evergiven meme but i am delighted 😂 pic.twitter.com/OSJHssSXRp

The ship also lent itself to a Java joke.

it's funny because it's true pic.twitter.com/iOahqWGZGA

And who doesn't love a joke about the complexity of managing clouds?

Of course there were also Kubernetes and container gags.

Other memes nod to the fact that the Ever Given may have replaced the "Distracted Boyfriend" meme as the world's visual metaphor of choice.