CEO reckons this tech will be used in 300 billion chips

Arm has set out its stall for the first major new version of its instruction set architecture – Armv9 – in about a decade, and promised compatible chips will have improved machine-learning and security capabilities.

Previous versions of the architecture introduced support for things like virtualization and SIMD; the last major update, Armv8, debuted in 2011. Arm says its latest instruction set architecture, v9, will be geared toward today's top buzzword in tech – AI. The chip design house, which Nvidia is still trying to acquire from Softbank, laid on the marketing a little thick for the unveiling of the ISA, though there is some detail here. 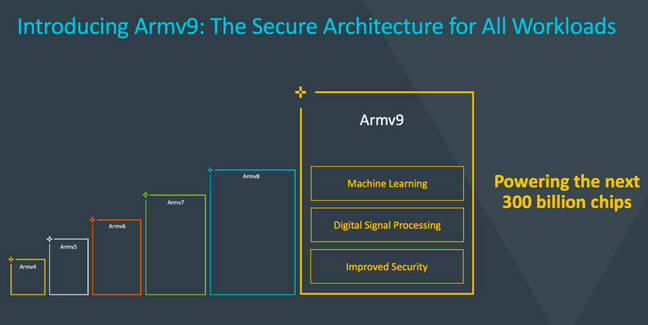 Arm's summary of what's new in version nine of its architecture ... Click for bigger

"As we look toward a future that will be defined by AI, we must lay a foundation of leading-edge compute that will be ready to address the unique challenges to come," said Arm CEO Simon Segars.

"Armv9 is the answer. It will be at the forefront of the next 300 billion Arm-based chips driven by the demand for pervasive specialized, secure and powerful processing built on the economics, design freedom and accessibility of general-purpose compute."

Segars is betting that the use of artificial intelligence will continue to rise and dominate the industry for the next decade ahead, and so we're told there are features in its v9 architecture that boost AI applications performance.

In practice, this means support for multi-precision arithmetic to aid matrix math calculations used in deep learning, as well as enhanced digital signal processing to handle in hardware, say, verbal commands spoken to smart speakers and assistants. It also continues to support a wide range of floating-point precisions, from bfloat16 to INT8, used to train neural networks and perform inference.

All of this is wrapped up under the banner of SVE2, which includes Arm's SVE. 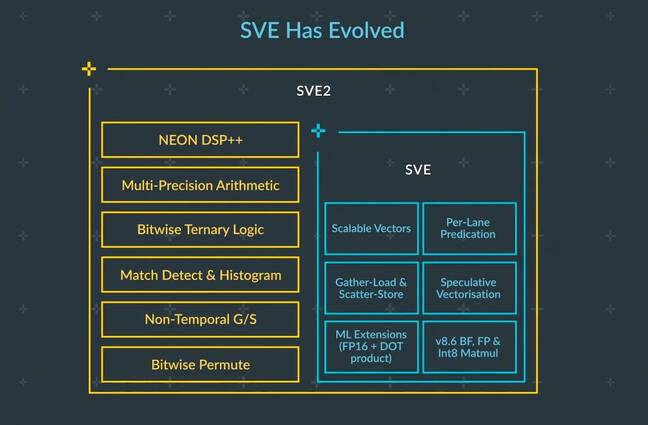 We're told Armv9 will lay the foundation for all types of future Arm-produced designs, from microcontroller cores for autonomous drones to general-purpose CPUs for servers and supercomputers. As modern devices increasingly collect and transmit sensitive data, including speech or images, Arm said security is more important than ever.

"Addressing the demand for more complex AI-based workloads is driving the need for more secure and specialized processing, which will be the key to unlocking new markets and opportunities," said Richard Grisenthwaite, Arm senior veep, chief architect, and fellow.

As such, Armv9 introduces what's called the Confidential Compute Architecture (CCA). The CCA includes Realms, another hardware-enforced partitioning system in which workloads, such as virtual machines and system services, can be transferred into a realm and run in isolation from other software. The goal is protect code and data from whatever else is running, whether it's vendor-supplied firmware, or an operating system or application. If one realm is compromised, the others can stay safe, in theory. 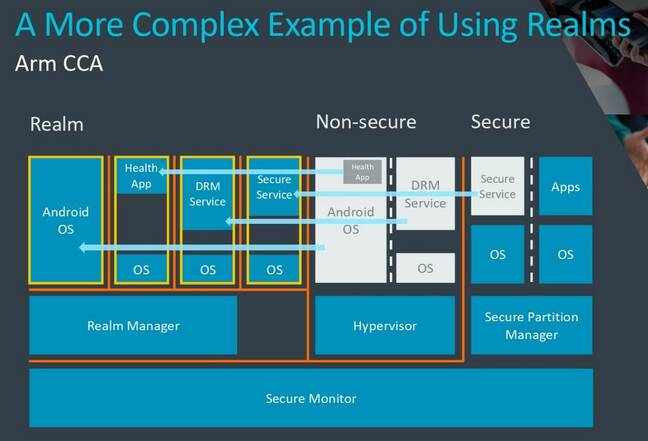 Arm's basic overview of its Realms security partitioning scheme ... Top, a simple implementation of Realms and, below, a more complex approach

This type of partitioning is not unique to Arm. Realms appears to be Arm's latest iteration of its security isolation mechanisms, its most notable one being TrustZone.

The first Armv9-compatible chips will be application processors, we're told, and we should expect to see them launch next year. Arm will release more technical info on the new architecture in the coming months, a spokesperson told us, though there are some Armv9-A developer details here. ®

You can read analysis and commentary on the Armv9 announcement here, over on our sister title The Next Platform.