Was it a coded message? The password for accessing nukes? Nope

A cryptic message sent from the Twitter account of the US Strategic Command, then deleted, could have been many things.

Was it a coded message sent in plain sight? Was it a password to the systems used to control and fire America’s nukes that was copy-pasted in the wrong place?

It was posted on a Sunday, and was up for 30 minutes before a second tweet appeared: “Apologizes [sic] for any confusion. Please disregard this post.” Even more suspicious. Had the account been hijacked, possibly by a non-English speaker who misspelled “apologies”? 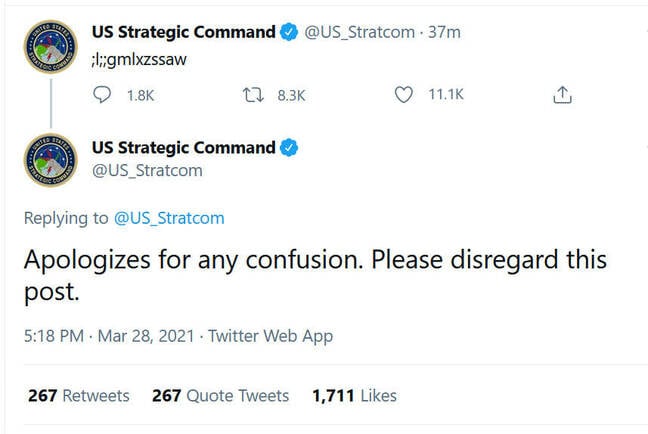 Then both tweets disappeared. A cyber-tussle between one of America’s most terrifying and awesome departments and some unidentified third party? Had the silent cybersecurity war moved to Twitter?

Eagle-eyed freelance journalist Mikael Thalen noted the strange message and decided to investigate further. He sent a freedom of information (FOIA) request to USSTRATCOM asking for any and all documentation surrounding the cryptic tweet.

“This is in response to your 29 March 2021 FOIA request for records pertaining “Any electronic correspondence (emails. Messages), internal memos, or reports on the now-deleted tweet made by the official US Strategic Command Twitter account (@US_Stratcom) on March 28, 2021 with the text ‘;l;;gmlxzssaw’,” the response notes, before continuing: “I engaged with the Deputy Public Affairs Officer and there are no written records related to your request.”

But then some real actionable intelligence is revealed.

“The explanation of this tweet is as follows: The Command’s Twitter manager, while in a telework status, momentarily left the Command’s Twitter account open and unattended. His very young child took advantage of the situation and started playing with the keys and unfortunately, and unknowingly, posted the tweet.”

Ah, yes, the open laptop lesson, learned at some point by all parents and pet owners. Except very few of us have the public-facing social media account for American nuclear weapons readily accessible at the time.

But back to the Strategic Command response. In case any thought the military had gone soft, the response closes: “Absolutely nothing nefarious occurred, i.e., no hacking of our Twitter account. The post was discovered and notice to delete it occurred telephonically.”

Which to our minds means that the person in question left the laptop briefly, returned and saw the tweet, uttered an expletive, sent a panicked response. There may be regulatory reasons why the tweet wasn't deleted immediately but the use of the word "telephonically" suggests a quick (and possibly very loud) call from the boss.

The lesson? Kids can’t be trusted. ®