Xiaomi scoots off to build electric cars, pumps $10bn into the tank to get things rolling

Labelling the decision “one of the most important … Xiaomi has ever made”, Lei detailed a plan to create a subsidiary, and fund it to the tune of $10bn over a decade. Lei himself will serve as CEO of the new venture and stated: “I am willing to bet my lifelong reputation to fight for Xiaomi vehicles!”

Lei conceded that it’s quite a step up from smartphones and electric scooters to cars, but insisted that Xiaomi has the expertise, cash, and loyal customers necessary to make the venture a success.

Just what will roll out of a Xiaomi factory, and when it will roll, was not discussed.

The company was more forthcoming with details of a new folding smartphone.

The main camera can capture 108 megapixels, while an ultra-wide angle shooter gets by at a mere 13MP. Four speakers round things out.

Xiaomi says the device is 27 percent lighter than rival foldables thanks to a cunning U-shaped hinge. 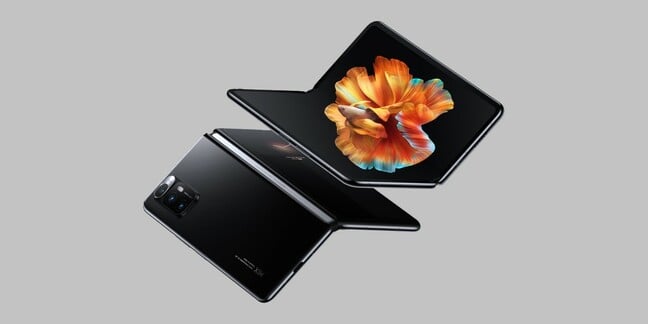 The device went on pre-sale in China yesterday, at prices ranging from $1,520 to $1980 depending on memory and storage options.

There’s no word on when the FOLD might go on sale beyond the Middle Kingdom.

The rest of us must make do with the new MI 11 series, which offers a premium “Ultra” model, a more modest “i”-series and the lower-end “Lite”. Xiaomi’s fitness band, the world’s best-selling such device, has also been updated, and the company has a new projector, too. All of the devices mentioned in this paragraph will be sold outside China.

The company has also decided that this flurry of new activity means it needs a new logo.

The key design innovation is the addition of the letters “xiaomi” below the company's current logo, says Lei's letter. Which seems a very worthy way to celebrate a decade in business. ®