We bring our Lego My Own Creation (MOC) odyssey to a close today with a bit of unabashed self-indulgence in the form of a Skylab model and Skylab modification for the enormous Lego Saturn V.

Why two? Simply because in spite of the sheer size of the Lego Saturn V, the scale means that a model of America's space station to fit might seem a little small. Instead, we opted to build one to Saturn V scale, as it sat on the launchpad back in 1973 and another as it was in orbit, missing a solar array and featuring the rapidly designed and constructed shade erected by the first crew.

For those unaware, Skylab was America's first crack at a space station (at least one that made it to orbit). Converted from the S-IVB third stage of the Saturn, the launch in 1973 nearly ended in disaster after shielding was torn from the rocket during ascent, ripping off one solar array and jamming the other. 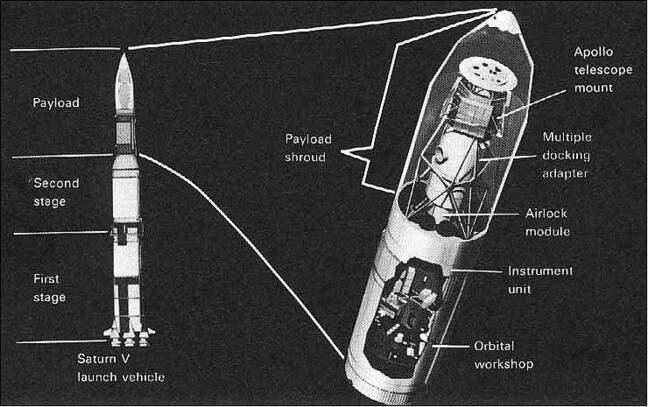 The first crew conducted an audacious on-orbit repair, erecting a solar shade and freeing the stuck solar array. Two more crews would visit and the final crew, Skylab 4, returned to Earth in 1974. 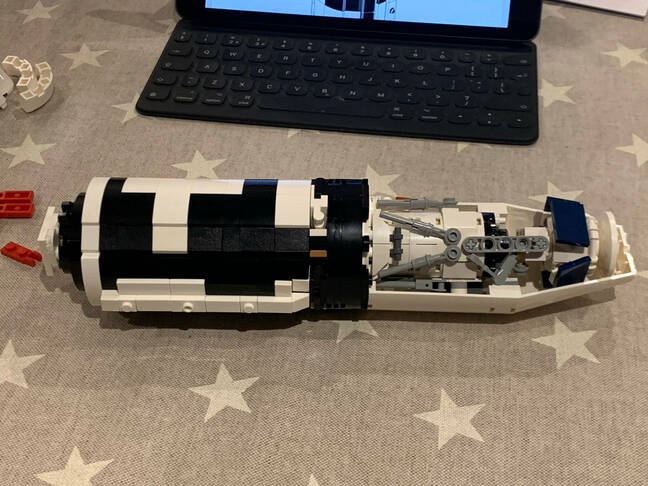 Hopes to use the Space Shuttle to reboost the station came to naught, and Skylab famously came down in July 1979, scattering debris over the Indian Ocean and Western Australia.

The Saturn V modification came from a design we found uploaded to a group by Adam Wilde. Other examples of work credited to Wilde can by found on Bricks In Space – we're rather taken by the Apollo Lander mods, which are a pleasing update to the set that accompanies the Lego Saturn V.

Wilde's design takes a stock Lego Saturn V and replaces both CSM and S-IVB with Skylab in its launch guise, complete with payload shroud. 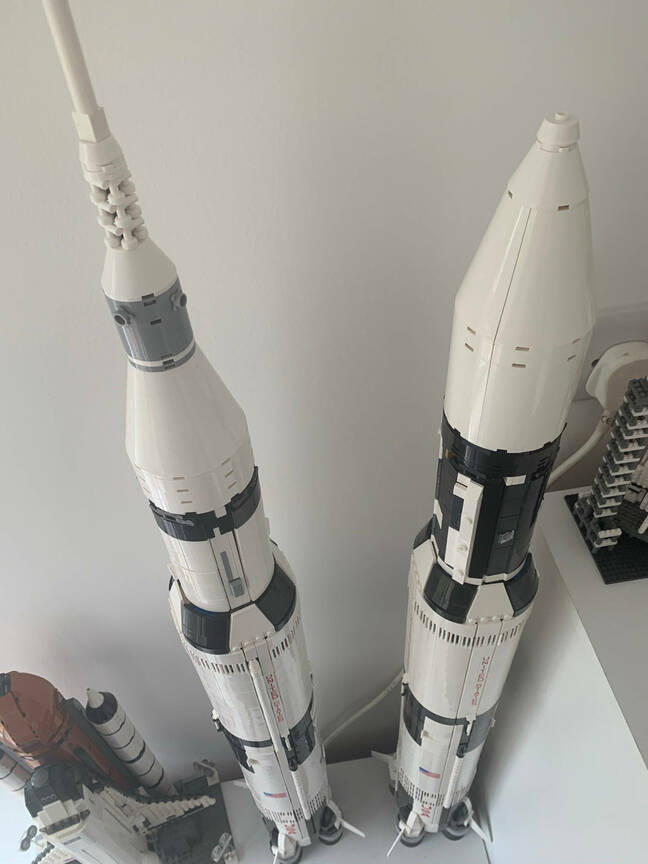 Side by side: the original (left) and the modified Saturn V

As with many designs in the MOC world, Wilde's credits several others. "Credit's a thorny thing to unpick," he told The Register, "but I try to credit anyone whose work I've co-opted into my designs.

"My Skylab Saturn V incorporates some elements of work by both Greg Kremer (repositioning of the S-II fill/drain/vent fairings, and replacing the grey behind the grille sections on the first and second stages) and David Welling (the aft heatshield on the S-II), but the changes are something like 80% my work. The Skylab payload is lengthened and thoroughly reworked from Sam Bradford's design, which is in turn based on Grant Passmore (Eiffelman)'s original on Lego Ideas. It's ... complicated!"

As with many MOCs (unless one ventures into the world of Chinese sets – more on those later) a parts inventory and step by step guide familiar to anyone used to putting together the plastic bricks is available. We used Bricklink once again to order up the components, which came to around the £60 mark (if one needs everything and opts for new parts).

Assembly was straightforward, with the steps producing a recognisable space station in launch configuration. The Multiple Docking Adaptor (MDA) was easy to spot, as was the Apollo Telescope Mount (ATM) with its vital solar arrays stowed for flight. It was almost a shame to hide all that detail behind the payload shroud.

But hide it we did, since part two was the building of the much larger version of Skylab as it was in orbit (after the stuck array was released and sun-shade erected).

For this we took Joe Chambers' design, an obsessively detailed 1:73 scale model of the space station.

Wilde described it as "Phenomenal – the accuracy and attention to detail is a thing to behold."

The £9.12 design also includes a version for the station as engineers originally imagined it, but it was the version as wound up on orbit that we went for. 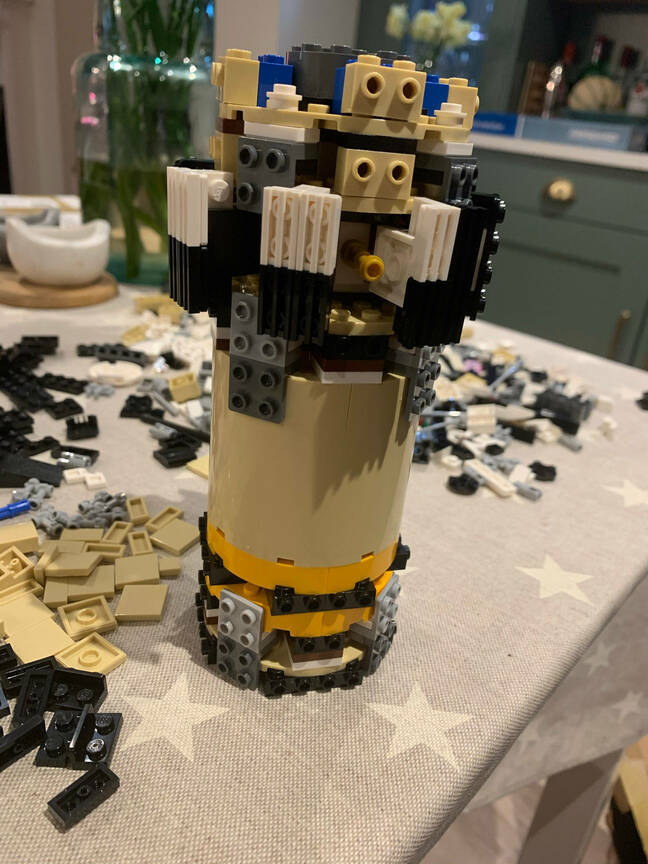 Chambers told us he started with Grant Passmore's 1:110 Skylab and scaled things up from there, first working from the second stage of the Saturn V before starting again from scratch. The level of detail is hugely impressive, from the ATM and MDA, through to an Apollo CSM configured for extended stints on orbit.

The remaining solar array is present, as is a neat recreation of the shade using tiles.

More impressive still are the instructions which, like the Perseverance Rover we built, include details on the mission that would put official Lego sets to shame. Indeed, some build steps featured annotations explaining what the Skylab component being built actually did. 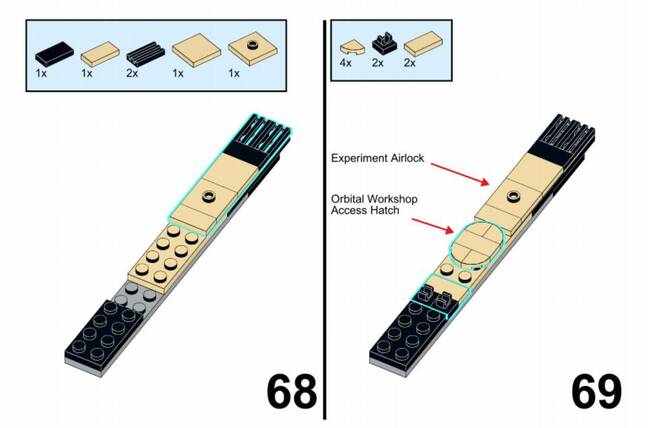 A sample of the Skylab instructions. Copyright: Joe Chambers (used with permission)

All told, it took us three days to assemble the beast and, as with the Rover, it felt reassuringly solid even if parts of the ATM were as spindly in Lego as it was in orbit. Also, as with the Rover, we used Bricklink to order the parts (other sites, such as Rebrickable, are also available) and goodness, Chambers does not jest when he ends his step-by-step guide to getting parts with "Spend lots of money."

Currency fluctuations aside, using new bricks from a variety of vendors resulted in a cost of around £150 if one was starting from scratch. Fortunately we've built and dismantled plenty of sets over the decades, and aside from an occasional tricky to find piece, had plenty of parts lurking in rainy weekend boxes. Costs can also be cut by opting for used Lego. 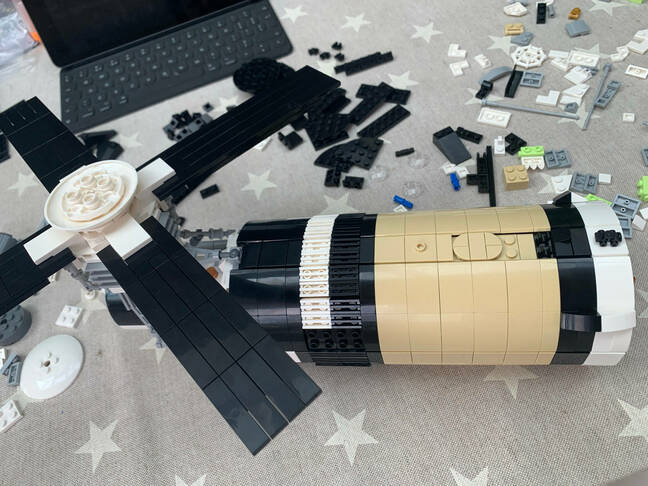 Future designs might include a even larger version of the Skylab model, perhaps with accessible interiors.

One particular piece in Chambers' current Skylab plans (and also featuring in the Mars surface model) was a part from a Unikitty set, quite at odds with the detailed representations of NASA's finest.

"I have no idea what you are talking about..." he said before adding: "Kidding aside, yes. I found that brick at a used Lego shop and because absurdist humor is among my favorites, I decided to put this, the most joyfully non-industrial thing I could find into the LUT design."

The Launch Umbilical Tower (LUT) is impressive and Chambers' take on it features what has become his signature brick. However, hinting at some of the challenges faced by designers, he said: "It also acts as a bit of copyright tracking too." 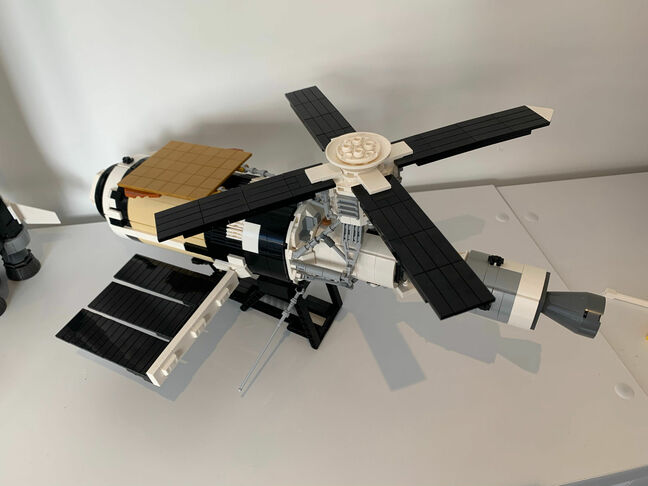 MOC the weak: Lifting the designs of others

Designs cropping up elsewhere is a headache. Speaking about his LUT, Chambers described it as, while not the first, one of the most complex. And that complexity, he said, "really prevents it from being stolen."

"It's hard to steal 1,400 pages of instructions in 9 different parts with 10 different versions, and you wouldn't get that much out of it," he explained.

Still, Chambers does get riled over wholesale lifting of designs, saying: "The one subject that does get me mad is that the designer of the first Lego LUT, Valerie Roche, had her design stolen by an overseas supplier."

Roche's design had been optimised for simplicity and reproducibility and, according to Chambers, "they did a one-to-one copy."

"I am certainly not happy with people who steal whole designs and probably make a lot of money," he said.

But what to do? Roche's design was submitted under Lego Ideas "and therefore has some protections," explained Chambers. Litigation can be an expensive challenge, and there is no guarantee of success even if Lego gets involved. "It can be a double-edged sword if Lego decides to get super lawsuit happy," he added.

"Us little guys, well, we just fly under the radar as best we can and practice tactical mutual respect."

The Register attempted to contact Roche, but have yet to receive a reply.

YCBricks (credited with the design of one of the Mars Rovers we previously looked at) told us that while the selling of products had not been personally authorised (and that certain companies "used to just steal MOC designs form Rebrickable without giving designers credit"), the designer was happy with the approach of bricks being sold separately from instructions. The latter could then be picked up from the source via a link.

As the 50th anniversary of its launch nears (14 May will be 48 years since that final Saturn V launch sent Skylab into orbit), constructing the station is a pleasing reminder of the scale of the beast.

How those bricks would respond to being dropped on Australia is an entirely different matter. ®

Coal is cooked and gas is dissipating, as renewables delivered a fifth of all EU juice in 2022
Science2 Feb 2023 | 39