You cannot kill what does not die

Microsoft Paint has followed its long-lived chum Notepad into the howling wilderness of the Microsoft Store.

It has been a while coming, but last night's Dev Channel Insider build of Windows 10 (21354) has made the MSPaint app updateable via the Microsoft Store.

The change, which was accompanied by a whizzy new icon for the aged bitmap editor, will allow Microsoft to tinker with the app without requiring a full-on Windows update. The same fate has already befallen the Notepad text editor, although we fervently hope those within the walls of Redmond fight the urge to fiddle with it too much.

Paint first turned up in Windows 1.0, back in 1985. Unlike Notepad, however, today's MSPaint is a very different beast compared to what first emerged on floppy disks all those years ago. 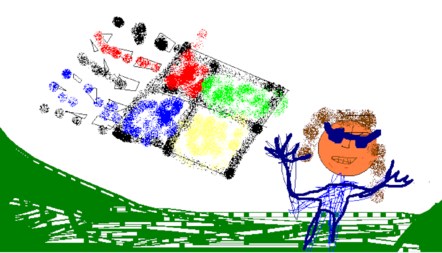 MsPaint: You cannot kill what does not die... Image: Reg team

A succession of minor improvements over the years culminated in the ribbon toolbar treatment during the Windows 7 era before a concerted attempt was made to kill it off in 2017.

Thankfully MSPaint was spared, and while Microsoft urged customers to give Paint 3D a go, the original remained in the box despite an ominous promise that it would turn up in the (then) Windows Store at some point.

Nearly four years on and the day has come. Microsoft may have celebrated the slightly naff, yet still delightfully retro, pixel joys of old with its latest festive fan-wear at the end of 2020, but that did not spare it from the Fluent Design System, an elevation out of the accessories folder, and a trudge to the Microsoft Store for updating purposes.

Joining it is the company's handy Snipping Tool.

Other updates in the build, which now comes from the CO_RELEASE branch, include more personalisation tweaks for news and interests on the taskbar (assuming you're one of the lucky insiders to actually receive the feature) and improvements to display and camera settings.

It is also now possible to toggle compatibility settings for x64 application on Arm64 devices and the default path to access Linux files from Windows using the Windows Subsystem for Linux has been changed from \\wsl\\ to \\wsl.localhost\\.

Sadly, however, "accessing the virtual GPU is broken for Windows and Linux guests." An attempt to add a vGPU to a VM will have no effect and the VM will carry on using software rendering. Other issues including lengthy pauses during the update process serve to remind users that this is, after all, preview code. ®