Feature bloat: Psychology boffins find people tend to add elements to solve a problem rather than take things away

Scientists working on the psychology of problem solving may have hit upon why things always seem to get more complicated.

A newly uncovered heuristic – a mental shortcut or rule of thumb – shows bias towards adding features to find a solution, rather than subtracting existing features.

A simple experiment in Lego has provided some insight into the phenomenon.

A team led by Gabrielle Adams, assistant professor of public policy and psychology at the University of Virginia, presented 197 participants with a Lego tower, four Duplo blocks high, six-by-six nodules on the horizontal plane. Above the tower was an 8x8 flat roof supported in the corner by a single 2x2 block.

The objective was to stabilise the roof so it would not fall onto a figure below when a brick was placed on top of it.

Adams and team also studied how participants make a 10×10 grid of green and white boxes symmetrical on a computer screen. They found people tend to add green boxes to the emptier half of the grid rather than removing them from the fuller half, even when doing the latter would have been more efficient.

The researcher also studied how people completed this task under "cognitive load." While working on the task, they were asked to press the "F" key whenever they saw a 5 in a string of numerals passing across the top of the screen. The result was that people systematically default to searching for additive transformations, and consequently overlook subtractive transformations.

[P]eople are biased towards creating solutions by adding features rather than taking them away.... A study also observed the tendency at an organisational level

The researchers seem to have discovered a heuristic that people are biased towards creating solutions by adding features rather than taking them away. A study also observed the tendency at an organisational level.

For example, looking at university archives, they found that an incoming president had requested suggestions for changes that would allow the institution to better serve its students and community. Only 11 per cent of the responses involved removing an existing regulation, practice or programme. 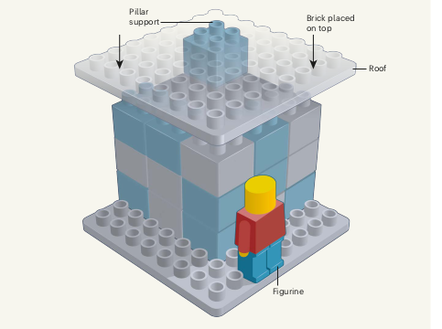 The research, published in Nature, argued that the discovery could have far-reaching ramifications.

"As with many heuristics, it is possible that defaulting to a search for additive ideas often serves its users well," the paper said. "However, the tendency to overlook subtraction may be implicated in a variety of costly modern trends, including overburdened minds and schedules, increasing red tape in institutions and humanity's encroachment on the safe operating conditions for life on Earth.

"If people default to adequate additive transformations – without considering comparable (and sometimes superior) subtractive alternatives – they may be missing opportunities to make their lives more fulfilling, their institutions more effective and their planet more liveable." ®

re:Invent It's about small teams, microservices, bias towards serverless, and having the creator of Java on standby
Devops29 Nov 2022 | 6