Got $10k to burn? Ultra-rare Piet Mondrian-esque Apple laptop is up for grabs on eBay

Another piece of Apple history has been put on the block, this time it's the turn of a weird - and in some eyes, possibly wonderful - limited edition of the PowerBook 170.

Apple released a model of the laptop in 1992 to coincide with that year's JLPGA (Japanese Ladies Professional Golf Association) tournament. It was, to put it mildly, a bit of an odd fish.

Produced in small numbers (estimates put it at around 500), the Japan exclusive looked a bit like a Piet Mondrian painting. The display bezels and palmrest were blue; the display top-case was white; the battery case and sliding panels were red; the hinges were yellow; and the rotating kickstand was green. It almost looks as though it was made of Lego.

This weirdness, combined with the machine's relative scarcity, has made it a sought-after item for some collectors. One mint edition model, listed on eBay this weekend by the owners of Dubai's largest private vintage Apple collection, has a starting price of $2,999.99. Based on historical prices, it wouldn't be a surprise to see it sell for three times that. 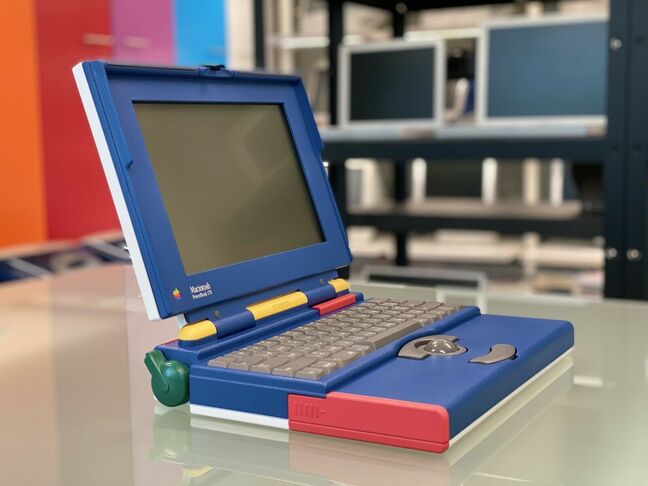 Or perhaps more. The vintage computing hobby has exploded during the pandemic as bored tech-heads try to find something to occupy the dreary lockdown months. Prices are sky-high, and scarcity breeds demand, especially when it comes to retro kit.

By contrast, the standard PowerBook 170 in working condition typically sells for under $300. And this is effectively the same computer, with the only difference, save for the unique design, an extra 4MB RAM.

The JLPGA PowerBook 170 arrived in the waning months of John Sculley's tenure as CEO of Apple. Sculley wasn't much of a technologist at the time; he was a marketer, best known for coming up with the "Pepsi Challenge" as president of the North Carolina sugar-water manufacturer.

And this machine is Sculley through and through. It was a one-time machine, designed to drum up enthusiasm and media column inches, but with little bearing on the long-term direction of the company from a product position.

It's an oddity, basically. Still, by the standards of the Apple 1, which routinely sells for over $1m, it's more affordable. And, given the ongoing direction of the company, we're unlikely to see anything like it ever again.

Does that make it almost worth the possible $10,000 finishing price. You, dear readers, be the judge of that. ®