Ice, ice maybe? Astrobotic will ride SpaceX's Falcon Heavy to the Moon in 2023 and drop off NASA's water-hunting rover

Firm's Griffin lander to do the honours

Astrobotic has provided an explanation for another of SpaceX boss Elon Musk's tweets with news that its Griffin lander lander will be riding a Falcon Heavy to the Moon in 2023.

Musk last week sent fanbois into frothing excitement with an announcement that a trip to the Moon was on the cards.

With Musk's Starship exploding on a regular basis (and we applaud the genius that put together this SpaceX and Pixar mash-up), SpaceX's silver behemoth seems unlikely to be troubling lunar orbit in the immediate future.

Astrobotic will instead be using SpaceX's Falcon Heavy, made up of three Falcon 9 rockets strapped together.

The company scored an order from NASA to deliver the agency's Volatiles Investigating Polar Exploration Rover (VIPER) to the Moon in 2020.

Astrobotic's plan is to use its Griffin lander to deliver the VIPER trundlebot to the lunar surface in 2023. Its Peregrine lander is due for launch later this year atop United Launch Alliance's Vulcan Centaur but SpaceX's Falcon Heavy has been selected for Griffin Mission 1 (GM1). 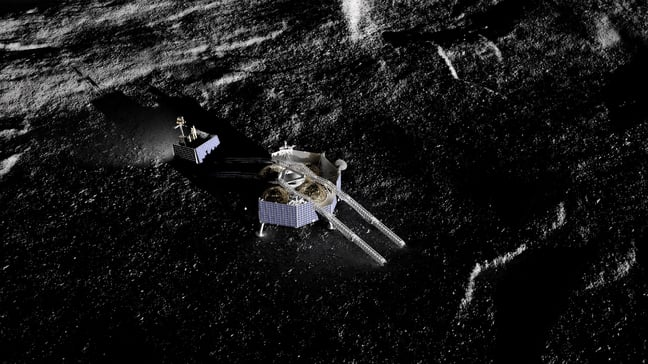 VIPER egressing from Griffin on the lunar surface (pic: Astrobotic)

Qualification work on the lander is under way. Following the launch from SpaceX's facilities at Kennedy Space Center's Pad 39A in 2023 and a successful journey to the Moon, the Griffin spacecraft will land and lower its ramps to permit VIPER to disembark and go hunting for water ice. Utilising in-situ resources on the Moon such as water ice would make maintaining a human presence considerably more viable.

SpaceX's Falcon Heavy has not troubled the launchpad since its third flight in 2019, when it supported the US Air Force's Space Test Program. Despite the more than a year's break, the launcher has a busy few ahead. Both US Space Force and commercial payloads are due for launch in the coming years, as well as NASA's Psyche asteroid mission and payloads in support of the Artemis program.

As for Astrobotic, Daniel Gillies, GM1 director and a former SpaceX mission manager, was delighted at the prospect of working with his erstwhile employer once more. "My first exposure to Falcon Heavy was as a SpaceX Mission Integrator on the STP-2 mission and I'm proud to be utilizing that same launch vehicle for Griffin," he said. ®