System76, a US company which markets laptops, PCs and servers running Linux, is developing a new GNOME-based desktop GUI called COSMIC for its Pop!_OS distribution.

System76 has its own Linux distribution, called Pop!_OS, which is based on Ubuntu, though with a customised installer and drive encryption by default. The company said it is now developing COSMIC (Computer Operating System Main Interface Components) in time for the next release of Pop!_OS in June. This will be called version 21.04, based on the Ubuntu 21.04 release expected later this month. 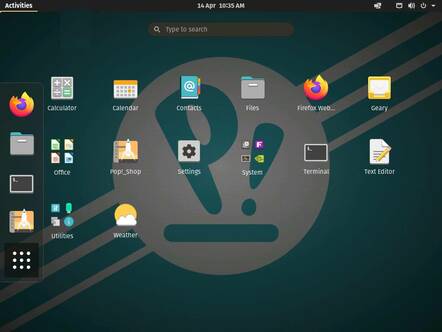 The current Pop!_OS desktop, based on Ubuntu

COSMIC appears to be based on GNOME 3.38 rather than the newly released GNOME 40, judging by the code on GitHub. System76 said that it studied user behaviour and sought to refine key elements of the desktop accordingly. The Activities Overview, the core navigation tool in the GNOME desktop, has been split into two views, one for workspaces (open windows and virtual desktops) and one for launching applications.

There is also a change to the behaviour of the Super key (another name for the Windows key on PC keyboards), which will now activate the application launcher by default. 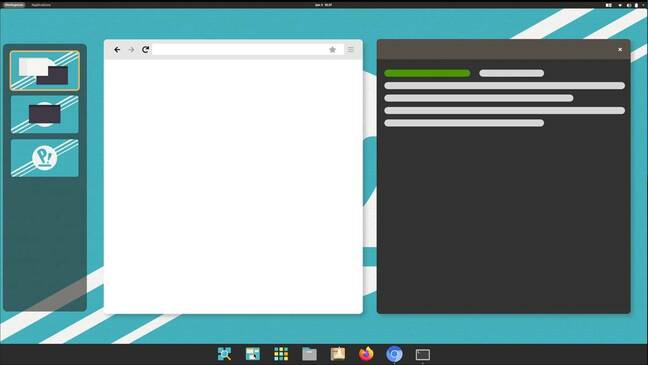 According to System76, "over 56 per cent of Pop!_OS users surveyed use Dash to Dock or Dash to Panel."

Therefore a dock is built into the COSMIC settings and has options including position, stretch, auto-hide, and the ability to minimise windows to the dock. The team is also conscious of keyboard-driven users who, they said, "prefer a more efficient, distraction-free experience."

In this case, there would be no dock, freeing space for application window.

System76 is inviting testers to apply for a preview, but only wants "Windows and macOS users" as the company already has plenty of Pop!_OS users.

Linux desktop usage is not large relative to Windows or Mac, but it is steady. Statcounter reckons Linux has a 1.97 per cent market share, up from 1.66 per cent in April 2018. It has been overtaken by Google's Chrome OS, which is at 2.09 per cent. Windows has declined from 81.73 per cent to 75.55 per cent in the last three years, whereas macOS has grown from 13.18 per cent to 16.5 per cent. These figures are based on web analytics.

System76's appeal for Windows and macOS users to test its system makes sense given that its natural market is Windows users who are disaffected by privacy concerns, or developers and technicians who want the convenience of running an operating system more like what runs on most servers and mobile devices. Microsoft itself has recognised this by building Linux into Windows 10. MacOS users also have an incentive to move to Linux - much lower prices. ®