Is there a back button for reality?

Apple CEO Tim Cook announced a bunch of colorful iThings on Tuesday, including iMac desktop computers in rainbow shades, its most powerful iPad yet, and – gasp – a purple iPhone.

The top-end iPad Pro is probably the most interesting out of them all. Not only does it contain the iGiant’s homegrown Arm-compatible M1 system-on-chip, containing an eight-core CPU cluster, eight-core GPU, and a 16-core neural engine processor, it also comes packed with a LiDAR scanner as seen in last year's model. The LiDAR can detect objects and their motion, which can be useful for apps on the tablet.

During a product launch live-streamed over the web today, Apple suggested this technology can map people onto green screens, provide augmented reality, and so forth. The sensor also captures depth in photos and videos, improving their quality when light conditions are dim, we're told. 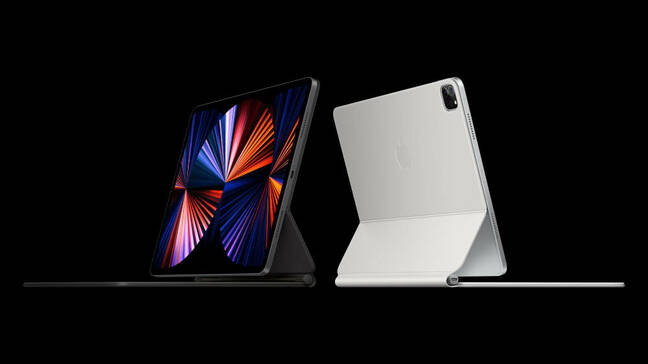 Like its predecessors, the fondleslab comes with an electronic pencil, a so-called liquid retina display, a USB-C port and charger, cameras in the front and back, and the ability to connect a keyboard. It's available in two main options: an 11-inch or 12.9-inch display with 128GB to 2TB of storage in silver or space grey starting at $799 (£749) for the smaller iPad Pro or $1,099 (£999) for the bigger one. You can place orders for the new gear from April 30.

Apple’s desktop iMacs have been refreshed with the M1 silicon as well. This gear will run its latest Big Sur operating system, and is claimed to have faster CPU and GPU performance over the x86-based 21.5‑inch iMac model released in 2019. 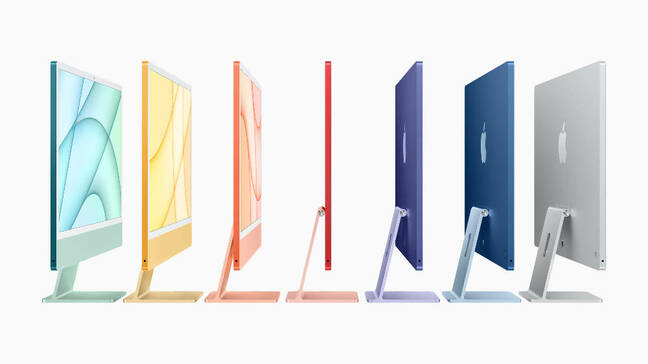 Something of a throwback to the late 1990s ... the new iMacs. Source: Apple. Click to enlarge

The computers are thinner and lighter than before; the 24‑inch screen is 11.5mm thick and weighs less than 10 pounds (~4.5 kilograms). There are USB-C ports around the back, a 3.5mm headphone jack, and a gigabit Ethernet port that's actually on the connected power adapter. Instead of the standard black or gunmetal grey colors, these desktop are available in all seven shades of the rainbow, except indigo, plus silver.

Here’s where Apple gets you, though. If you want your iMac in the more exotic yellow, purple, or orange it’ll be more expensive. The cheaper version starts at $1,299 (£1,249) and comes in blue, green, pink, and silver. The slightly more expensive option starts at $1,499 (£1,449), and it all depends on the amount of SSD capacity and GPU oomph you want.

There are a couple new features, too. It has a 1080p front camera that runs image-signal processing algorithms that are supposedly good for detecting faces, reducing noise, and boosting color tones to improve video quality for virtual meetings. The new iMacs can be ordered from April 30.

Oh, and before we forget: you can now order an M1-powered Mac Mini with 10GE connectivity.

There’s really not much to say here except Apple’s latest iPhone 12 and iPhone 12 mini are now available in purple, as shown below. The specs and features are all the same. If you’re a particularly big fan of purple, you can throw down $699 for the 5.4-inch mini, and $799 for the 6.1-inch one from April 30. 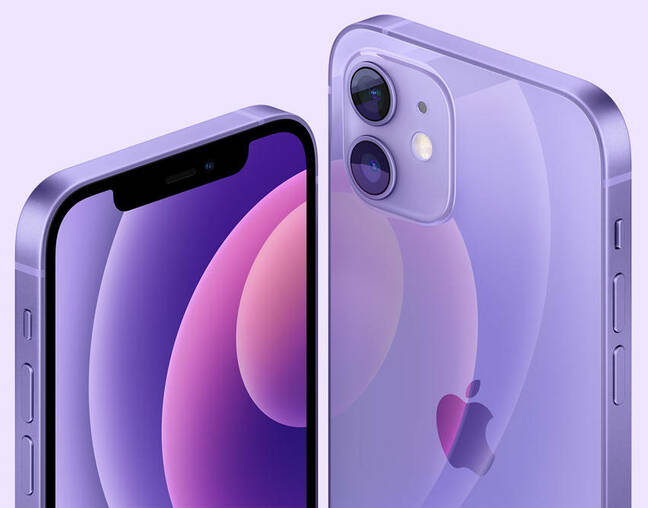 Here’s another bit of new kit: the AirTag is a battery-powered circular blob of plastic and metal designed to be attached to things like your keys or backpack. These devices connect wirelessly to Apple’s Find My service, and can be told via an app to emit a loud pinging sound on demand so they can be located if lost. A single AirTag will set you back $29 or you can buy a pack of four for $99. It's a Tile-esque tracker, basically.

Apple TV gets an update

The Apple TV black box for accessing various video streaming and music apps has been upgraded to use Cupertino's A12 bionic chip. What’s more exciting, perhaps, is the remote control that comes with it. Previous versions contained a small touchpad that could be pretty annoying to use, and the new one is bigger and has a clicky wheelpad. Feel the innovation. The whole package costs $179 and is, again, available for order from April 30.

You can watch the whole launch event below for yourself, if you don't mind the overuse of the word superb... ®