An Apple iPhone XR caught fire aboard a British Airways Boeing 787 mid-flight after a clumsy passenger dropped it down the side of her seat.

The Club World passenger, flying from Miami to Heathrow, had raised her seat from its lie-flat bed position back to the conventional one while a stewardess rearranged her bedding.

Yet on removing the blankets the stewardess "smelt a strong odour" of sulphur. This wasn't caused by the in-flight curry, either: a charger cable led "down the side of the seat." Even as she called the purser over, the stewardess heard a "hissing" sound and saw an "orange glow" as a plume of thick smoke began issuing from the seat.

The quick-thinking purser pulled back the seat padding to reveal "a red mobile phone trapped in the seat mechanism". She doused it with a fire extinguisher as one colleague contacted the flight deck and another fetched a bucket of water from the galley. 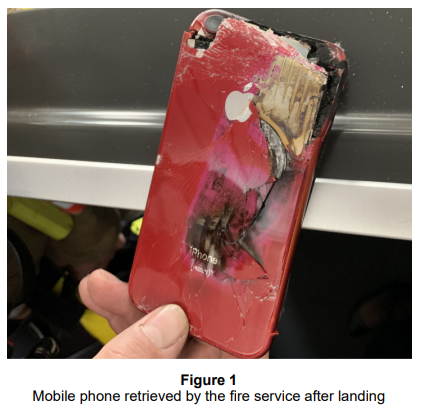 Up in the cockpit the pilots had noticed the sulphurous pong and, after hearing from the cabin crew, they called air traffic control to report a potential in-flight fire. Controllers ordered the airport fire brigade to meet the Boeing as it landed, as a safety precaution. Luckily the landing was uneventful despite a cabin crew member having to stand by the offending iPhone with a second fire extinguisher for the rest of the flight, in case it reignited.

The Jesus Mobe's immolation was noted by Britain's Air Accident Investigation Branch (AAIB), which noted the in-air fire in a report [PDF] published today. The unlucky airliner was G-ZBKF, delivered to BA in 2016.

Investigators found that BA's ops manual had appropriate warnings about mobile phones, tablets and their lithium-ion batteries, with the document warning of “structural deformation caused by crushed, physically or electrically abused lithium batteries” posing a fire hazard, as happened in this October 2020 incident.

BA passengers, found the AAIB, are told not to move their seats and to call a steward if they do lose a device down the side of one, though the AAIB report stopped short of finding that the passenger here knew her phone had fallen into her seat’s innards.

Civil Aviation Authority records showed 166 previous instances of phones being trapped in airliner seats over the past five years alone, with 42 of those resulting in smoke or fire.

Apple, as is its wont, didn't respond to The Register’s request for comment. The firm is currently fending off lawsuits over device battery fires.

Back in 2013 lithium battery fires were not unknown on Boeing 787s, although in those cases it was because the aircraft's own accumulators were bursting into flames. Since then the problems have been fixed, though the hazard posed by mobile phones still exists.

In 2015 the US Federal Aviation Administration published a warning to airline passengers about the dangers of lithium batteries. Meanwhile, the EU Aviation Safety Authority and Britain's CAA have called for airline seat designers to specifically address the problem of trapped phones getting crushed in adjustable seat mechanisms. ®