Where's the PowerShell command to ban all meetings forever?

Straight from Microsoft's Department of Stating the Bleeding Obvious come tweaks to its online productivity software based on research that found back-to-back meeting cause stress.

As such, Microsoft has introduced settings in Office 365 that promote breaks by making these corporate congregations start late or finish early.

Administrators can set three values in Microsoft Exchange Online which determine what happens when meetings are scheduled. The first, ShortenEventScopeDefault, sets whether meetings are ended early or started late, or the feature can be turned off.

Next, there are settings for how many minutes to reduce meetings by, depending on whether they are "short", defined as under 60 minutes, or "long". These set values in Outlook calendar options which the user can override.

"The capability will be coming to meetings scheduled from Teams in the future," said Microsoft's press information. 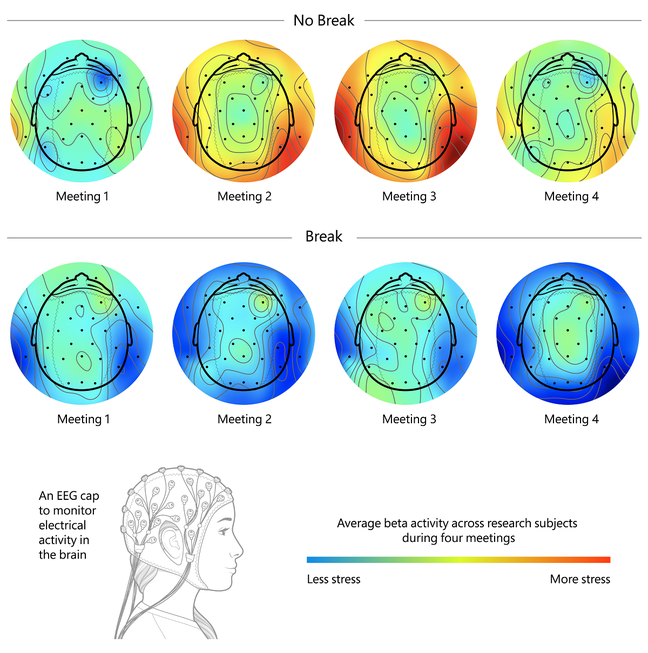 EEG scans prove that back-to-back meetings raise stress levels – but what about glitches in Teams?

Microsoft said that its settings are based on a study by its Human Factors Lab, which wired up EEG (electroencephalogram) monitors to 14 volunteers attending meetings. Some had breaks between meetings, while others did not.

"When participants had meditation breaks, brainwave patterns showed positive levels of frontal alpha asymmetry, which correlates to higher engagement during the meeting," said the researchers. They also observed that "for the participants deprived of breaks, researchers noticed that the transition period between calls caused beta activity, or stress levels, to spike."

The fact that back-to-back meetings cause stress may not come as a surprise to most of us. What is new here is the idea that organisational settings can prod employees into scheduling meetings that allow for breaks automatically. The counter-argument is that it is the human that should tell the calendar the time of the meeting, not vice versa.

Microsoft is not stopping there. Earlier this year it launched Microsoft Viva which describes itself as "an employee experience platform." It is a blend of knowledge management, communications, training, and a thing called Insights which, among other things, gives recommendations "to improve productivity and wellbeing."

From this week, the Viva Insights app for Teams is getting three new features. Reflection is meant to "help you become more aware of how you're feeling." Send Praise lets you "schedule praise reminders to build a habit of sharing gratitude." Finally, "virtual commute" is supposed to help you "wrap up your tasks" at the end of the working day. According to a promotional video, the virtual commute will do things like prompting you to mark tasks as done, preview tomorrow's meetings, note how you are feeling, and perform guided meditation.

'Your organization shortens events by default'... good news or annoying?

The appeal of such things will vary depending on personality. One person may welcome Viva Insights, while another may find it intrusive, annoying, and maybe a little pointless.

Many users will be quick to agree that Teams raises stress levels. According to feedback, over 34,000 users have asked Microsoft to let them "use multiple Teams accounts at the same time" – something rival Slack has no problem with.

The more successful the company is at persuading organisations to sign up for Teams, the more people will find themselves with multiple Teams accounts and no easy way to be signed in on all of them. Another top request is the ability to reply to a specific message in chat on the desktop app, something one might think is basic functionality. Poor calendar integration with group calendars is another source of annoyance.

Microsoft Viva seems well-intentioned, but perhaps fixing the most obvious shortcomings in Teams would be a better way of tackling the pressure of remote work.

In other research, El Reg has discovered that bears do defecate in woods and the Pope is indeed a Catholic. ®