Sure, your app is crap, but Windows won't tell. Promise

One billboard outside Blairsville, Georgia

Bork!Bork!Bork! Windows for Billboards appears to be a thing and, judging by this example of the breed, it is a little under the weather.

Unless, perhaps, the billboard spotted by Register reader Paul last month is a bit of snark directed at Redmond by an opportunistic arch-rival. What better way to demonstrate the occasional wobbliness of Windows than by flinging up a truck-sized error dialog for all to see?

More likely it is a sign that there are some places where Windows simply doesn't belong, and smart signage is one of them. 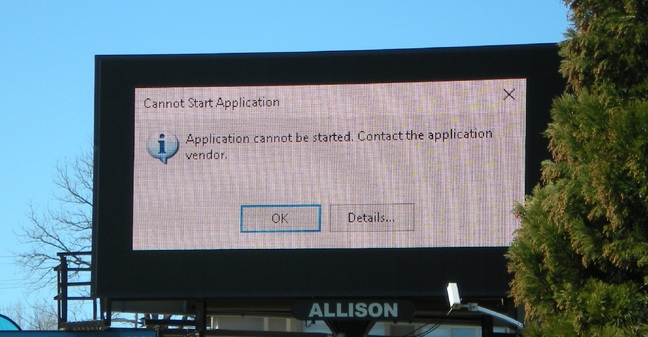 Bork hunters will find the distressed advertising panel squatting on the corner of Plott Street, just off US-76 West in the fine city of Blairsville, Georgia. The Register understands that the city was named for American Revolutionary War veteran James Blair rather than anything more recent involving a certain former UK prime minister.

Judging by Windows' behaviour, however, perhaps "Nadellaballstown" might be more appropriate, or "Windows Whoopsieville". The current travel restrictions mean we're unlikely to visit in person to make such assessments, which is probably just as well.

Still, perhaps it is unfair to lay this billboard-sized bork entirely at the feet of Microsoft. Yes, Windows has reacted to an application failure with all the grace and dignity of a UK lawmaker caught with fingers in till. But we should also look to the application itself, which Windows has discreetly failed to name.

It looks to us like one of Allison Outdoor's fleet [PDF]. The company prides itself "on providing personal attention to both the 'Mom & Pop' and Big Brand Businesses" and considers its digital billboards "State of the Art."