Sucks to be you, any aliens living anywhere near Proxima Centauri's record-smashing solar flare

Our stellar neighbor's biggest-ever belch would frazzle us Earthlings

Astronomers have described the most energetic solar flare yet detected from Proxima Centauri, the Sun's closest stellar neighbor.

It was a cosmic belch so intense, it's now pretty clear the star cannot provide the right conditions to support familiar DNA-based life on its exoplanets.

On May 1, 2019, researchers led by the University of Colorado, Boulder, spotted a sudden burst of light erupting from Proxima Centauri unlike any other flare previously seen before. 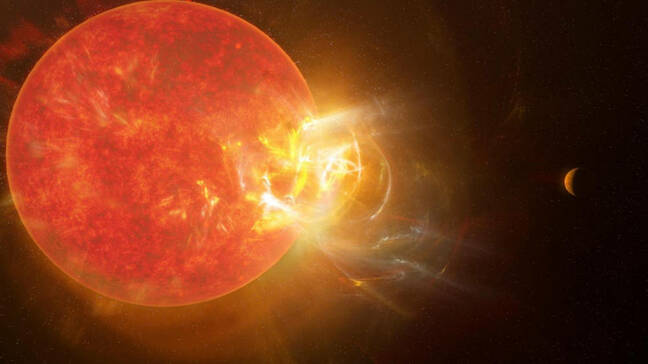 "The star went from normal to 14,000 times brighter when seen in ultraviolet wavelengths over the span of a few seconds," said Meredith MacGregor, lead author of a study into the solar outburst, just published in The Astrophysical Journal Letters, and an assistant astrophysics professor at the American university. A pre-print of the paper is here.

Using the data gathered from nine telescopes scattered across the Earth and in space, the team was able to calculate the power of the stellar explosion. "It's about 1023 Watts," MacGregor told The Register on Wednesday.

"A standard light bulb is 60 Watts, so that's comparable to a whopping 1021 light bulbs."

Red dwarf stars like Proxima Centauri emit flares more frequently than stable main-sequence stars like our Sun. A previous study reporting the discovery of a rocky exoplanet lying in Proxima Centauri's habitable zone in 2016 ignited fresh hope and excitement that alien life could exist right under our noses in the closest stellar system, just 4.2 light years away.

But the latest observations of Proxima Centauri, captured using nine telescopes scattered around Earth and across space, show that life as we know it probably wouldn't survive in such harsh conditions.

"Given the size of this flare and how frequently they occur, any life on the planet would have to look very different from what we see on Earth. UV radiation from flares like this could strip away the planet's atmosphere, and damage the DNA of lifeforms on the surface," MacGregor told us.

The record-breaking flare was a hundred times more powerful than ones ejected from our Sun, and lasted just seven seconds. Proxima Centauri's two known planets are repeatedly bathed in the intense radiation from the star's flares, making it difficult for them to sustain an atmosphere let alone alien life.

"A lot of the exoplanets that we've found so far are around these types of stars. But the catch is that they're way more active than our sun. They flare much more frequently and intensely," MacGregor said.

"If there was life on the planet nearest to Proxima Centauri, it would have to look very different than anything on Earth. A human being on this planet would have a bad time." ®

Made in Taiwan: Only TSMC seems to be dodging the downturn
Systems7 Oct 2022 | 2

Kieren's here to chew bubblegum and kick Nominet ass. And he's all out of bubblegum
Networks7 Oct 2022 | 24