Back to the office we trudge, dragging our hooked tails behind us

Episode 4 WE'RE BACK in the office – and I feel like I 'm only now just starting to feel the effects of COVID. 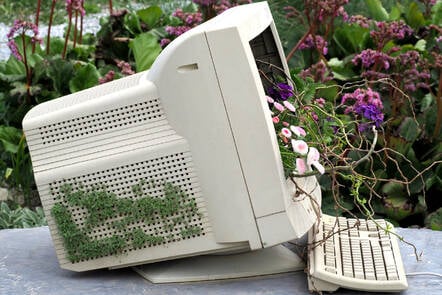 The average number of user calls – refreshingly low over the period of lockdown (a time that I like to refer to as "the break") – have escalated exponentially now that staff are heading back to the office.

There's even a queue outside Mission Control!

I'm partly to blame for the "assistance backlog" as I did lose my phone over the side of a bridge during a lockdown walk. Then I accidentally dropped the replacement down a storm grate, and the third phone had some battery issue which looked a lot like it'd been put in a 1,200W inverter microwave on high for 25 minutes. But actually, it was only 20. So now the PFY and I are dealing with six-plus months of secluded user insanity.

"My email only works sometimes," one of our first complainants says.

"So it worked when responding to... uh.. discount pizza offers, then mysteriously failed when your work deadlines fell due?" the PFY asks, perusing the Sent Items folder on her machine.

"It wasn't just me – my daughter emailed santa@google.com before Christmas and didn't get an answer."

"In actual fact she emailed satan@google.com," the PFY says, digging further into the Sent Items.

"So at least she got the domain name right," I chip in. "Anyway, it's not working."

"Hmmm," the PFY says, bashing the delete key several times. "I think it's all working – bar the 10 seasons of Taskmaster you tried emailing one of your office mates."

"I split them up!" she simpers.

"Into seasons," the PFY says, shaking his head. Sigh.

Next up we have a bloke who can't work his laptop. To be fair it's not his fault. When lockdown occurred, the company lobbied far and wide, insisting we were crucial to the nation's wellbeing.

This was then followed up with an application for a hefty government grant to act as a "centre of excellence for working-from-home methodology."

The application itself was full of the sort of new-age "wellness and mindfulness" gravy that passes as science to politicians wanting to show they're decisive but still able to think outside the box. It was completely immeasurable, totally subjective, and came with crypto-mantras like "freeing our isolated selves", "aligning oneself with wholeness", and "we're only truly alone with negative others."

The only trick they missed was not using a semi-famous actress with a double major in platitudes and non-specific eastern mysticism to spearhead the campaign. HOWEVER, in a decision that cannot be explained to – or by – any sane person, the company got the money and spent it on high-spec laptops for any staff not quick enough to steal the good stuff from a fellow worker's office.

And over half of it has sat, unconfigured (due to IT phone breakages), until now...

And in five minutes the PFY has him configured.

BOFH: Bullying? Not on my watch! (It's a Rolex)

"Ah well, it's probably the... uh... Update Processing Server. For your laptop."

At this point I think even the PFY has lost track of the gibberish he's speaking. The great thing about people who're expecting expensive kit is that they tend to sign for anything in an IT-looking parcel thinking it's more presents. Which it is – but not to him.

In a few short months we shipped every piece of ancient IT rubbish that'd clogged up our storeroom off to unsuspecting users at their homes – under the guise of a technology refresh.

The hardest part of the process was convincing a courier to dump-and-run. However, a short negotiation involving some polymer sheets with the Queen's portrait on them seemed to sort that problem out.

"From 1992," I say. "You know you can't just bring your home rubbish into work. I mean there's the dumping fees to consider if we took it. Though I guess you could lug it back home on the tube if you want."

Ten minutes and £40 later, the UPS is being relabelled with the Boss's home address, along with a Microvax 3100 wrapped in several layers of cardboard and labelled "Fragile Audio Equipment."

By the end of the day we have half a van full of stuff for the Boss, including three overhead projectors, an A3 laser printer, and a box full of those keyboard vacuum cleaners that everyone used for about a minute before dumping.

While the PFY puts the label on, I call our courier using the delivery phrase "late night front garden job." I'm sure he'll be pleased with it when he gets back from holiday...