Updated Bork!Bork!Bork! Microsoft is famed for eating its own dogfood and this week chowed down on a bowl of fresh bork as its consulting boss encountered what we can only assume is the company's latest attempt to deal with Meeting Culture.

Ben Rudolph, chief of staff for Microsoft Consulting, tweeted the screen of baleful blue that greeted him outside a room in Building 115 on the Microsoft's Redmond Main Campus.

The screen would normally cheerfully inform passersby of meetings due to happen or the gatherings already occurring within. 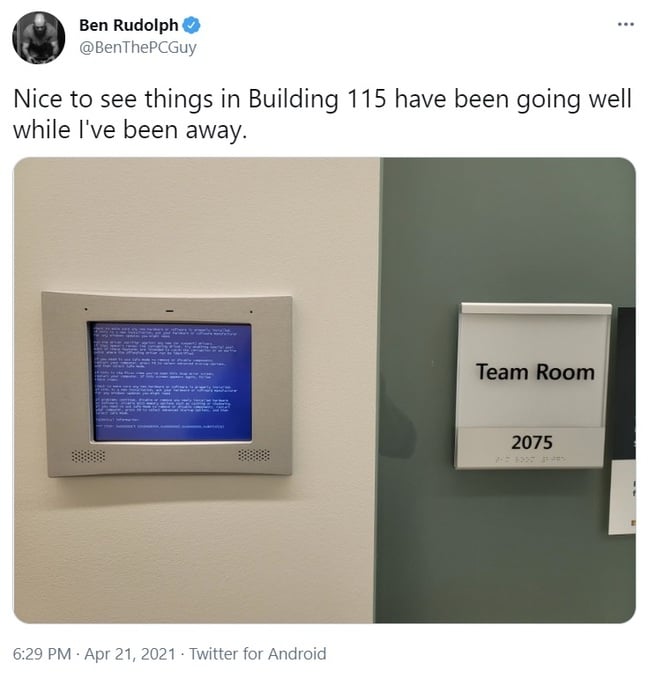 The Register understands that should a room stand vacant, the screen may also be jabbed by a user to book it, meaning they would not have to resort to the horror that is the Outlook client.

In this case, alas, all is not well. And we can't help but notice that this particular BSOD is a little unusual. Rather than the emoticon-based festivities found on modern Windows 10 BSODs, it looks a little… older.

The text is also a little at odds with what we're used to; the instruction to check that hardware and software has been properly installed is repeated just in case, you know, you were in any doubt with regard to what has upset things so.

The 0x000000C5 looks to us like a driver might have tripped and fallen down some virtual stairs.

Maybe, while Microsoft's buildings were devoid of staff, an enterprising engineer figured an update was called for. The resulting bork probably meant the person has gone into hiding. (Perhaps they did a runner into Microsoft's Windows Quality Assurance department – nobody ever goes there these days.)

Or, as we first suggested, perhaps this is indeed another case of Microsoft leading by example in the crusade against interminable meetings – a fresh message for those Redmondian calendars stuffed with back to back jawfests: the meeting room is unavailable due to being full of bork.

We contacted Microsoft to ask what had befallen the unfortunate display but the company's communications team has yet to respond - doubtless cowering from the bork stalking the hallways. ®

Ben Rudolph has sent us this statement:

Microsoft uses a cloud-connected scheduling tool to book meeting rooms. It’s quite handy; you can book any room, at any office, anywhere in the world, straight from Outlook. The day’s diary is displayed on little panels outside the room. This one, as you can see, had a little hiccup. I rebooted the panel and it sprang back to life, and I’m excited to share that Team Room 2075 is once again ready to host meetings….whenever we go back to the office!