From cash machines to commercial kitchen appliances, Doom really will run on almost anything

As long as the technical nous is there

If you've ever worked in a commercial kitchen, you probably know what a "bump bar" is. These plank-like computerised boards are the organisational force behind every restaurant, enabling sweat-drenched chefs to see pending orders and ensure a steady flow of food to the front of house.

Would it surprise you to learn that someone managed to coax '90s shooter Doom onto one? Of course it wouldn't.

Doom is the videogame equivalent of a glitter bomb, attaching itself to literally everything with an electrical current and a microcontroller. We've seen it played on digital cameras, iPods, calculators, even ATMs and a pregnancy test gadget that's had its electronics replaced. So the idea that it would run on a low-powered computer device used exclusively by eateries maybe isn't so outlandish.

The bump bar in question is an Oasys iPadSX bought by YouTuber ThisDoesNotCompute. And it's a fairly weird device.

Under the water-resistant chassis, there's a Pentium MMX-compatible processor (the Vortex86EX) manufactured by a little-known Taiwanese fabless semiconductor company called DM&P. This business largely focuses on the embedded sector, and has a fascinating history.

Its Vortex86 line hails back to the mid-1990s, at a time when smaller firms attempted to beat Intel at their own game with a plethora of relatively cheaper x86 chips. You're probably familiar with Cyrix and Via. Less well known is Rise Technologies, which released one mass-market chip (the woefully unsuccessful mP6) before shifting to the less-unforgiving embedded market. In 1999, Silicon Integrated Systems acquired the company, only to sell the Vortex86 line to DM&P several years later. It remains in production. 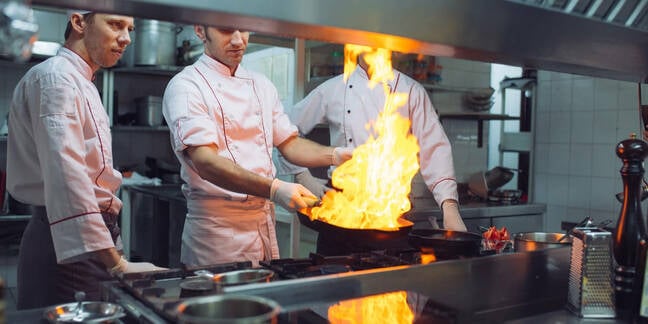 So how many steaks Diane are we supposed to flambé, Jacques? Um. What's the name of the '90s video game where you run around with gun? Because that's all I see. Fabulous. Table 16 is going to have such a laugh when they don't get their potatoes side. I was being sarcastic, Trevor - why do you never get that?

In addition to the new-old Pentium chippery, the board uses DDR3 RAM (released well over a decade after the original Pentium MMX designs), and comes with a small Flash storage chip that mimics a floppy drive. In terms of ports, there's PS/2, VGA-out (used to connect the bump bar with a monitor), Ethernet, and a single lonely USB port.

While it runs DOS, it's not the version you might have expected (FreeDOS, or an older version of MS-DOS). Rather, it uses the X-DOS operating system, created by Hitech Business Software in 1991. This was originally conceived as a more secure alternative to Microsoft's fare [PDF] with features such as password-protected partitions, built-in encryption, and integrated virus detection.

X-DOS offered compatibility with MS-DOS 3.3, although by the time Doom started circulating in the shareware world, Microsoft was up to version 6.1. This was the version ultimately used to load the game, with the OS booted from a USB flash drive after some fiddling with the board's locked-down SeaBIOS software.

So how did it play? Surprisingly well. Even though it's an embedded system, the Oasys iPadSX handily surpasses Doom's original system requirements, which mandated a 386-compatible machine and 4MB of physical memory at a bare minimum. Although the device lacks any onboard audio, save for a small "beeper" speaker, the play-through was remarkably smooth, with no perceptible lag or dropped frames.

Don't rush out and get one, however. As a specialist device, the Oasys iPadSX costs $769 new. By comparison, you can find yourself a vintage Windows 95/98 laptop on a certain auction for less than £50, and tower machines regularly appear in the e-waste pile at municipal dumps, for those willing to get their hands dirty.

This isn't the only weird repurposing of legacy tech we've seen lately. With someone coaxing an Iomega SCSI JAZ drive (remember them?) to work with a PS5, and another shoving an M1 Mac into a PowerMac G4 Cube, there's seemingly no limits to the curiosity (and abundant free time) of the retro tech community.

Floats over missile silos, shooting it down ruled more dangerous than whatever it's up to
Channel3 Feb 2023 | 12