Earthlings have succeeded in creating oxygen away from their lush home world and on the unforgiving dust planet Mars for the first time, using equipment on a robot they have lovingly dubbed Perseverance.

The gas was created in what's been called MOXIE: the Mars Oxygen In-Situ Resource Utilization Experiment. For this test, a "toaster-sized" atmospheric recycler made of 3D-printed nickel alloy parts, insulating aerogel, and a gold outer coat for infrared heat protection, distilled five grams of oxygen from the Martian atmosphere, which is 96 per cent carbon dioxide. That's enough oxygen for about ten minutes of breathing time for a human. 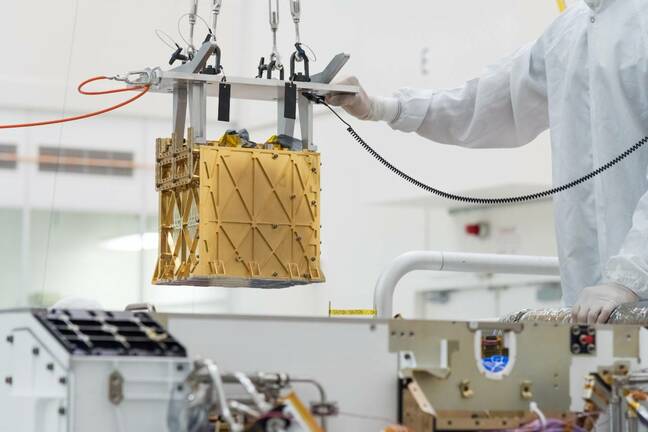 “This is a critical first step at converting carbon dioxide to oxygen on Mars,” said Jim Reuter, Associate Administrator of the Space Technology Mission Directorate (STMD) of the interstellar aeronautics agency overseen by the rulers of the Earth territory colloquially known as America.

“Oxygen isn’t just the stuff we breathe. Rocket propellant depends on oxygen, and future explorers will depend on producing propellant on Mars to make the trip home.”

MOXIE heats a sample of the atmosphere of Sol's fourth planet to 1,073.15K (800°C), splitting oxygen atoms away from the CO2 and leaving carbon monoxide. The Earthling hardware can, at best, produce 10 grams of oxygen an hour, though this is a prototype. In future, their space explorers should be able to bring improved equipment that can produce plenty of oxygen on-site, reducing the amount of gas they have to haul with them across the void.

The experimental processor will be fired up at least another nine times on Mars to test its performance at different times of the day and night, and with adjustments to its temperature settings to find the optimal output. Armed with that data, the humans hope to build and test a larger processor that can supply a whole Mars mission.

“MOXIE isn’t just the first instrument to produce oxygen on another world,” said Trudy Kortes, STMD director of technology demonstrations, on Wednesday. “This process allows us to convert these abundant materials into usable things: propellant, breathable air, or, combined with hydrogen, water.” ®