The world has more developers than ever, a new SlashData survey has reported - with 1.4 million more JavaScript developers than six months ago - and developer work patterns have been permanently altered by the COVID-19 pandemic.

SlashData's six-monthly State of the Developer Nation report is based on a survey of over 19,000 developers combined with the researchers' estimate of the global number of active software developers. This number, they believe, has increased from 21.3 million in October 2020 to 24.3 million today, an increase of around 14 per cent.

The first estimate of the number of developers was published by Slashdata in mid-2017, when it reckoned there were 15 million globally, of which 11 million were professionals. Incidentally, the researchers have always recognised that the term "developer" describes a "continuous spectrum of involvement with coding," to quote from its 2017 report, from casual to hardcore. SlashData attempted to narrow it down to those involved in "substantial coding projects." 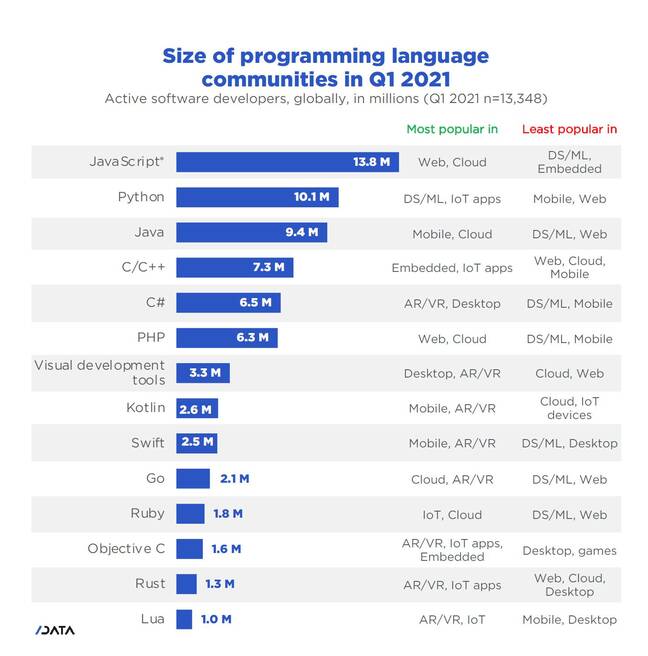 Locking down your code

The impact of the COVID-19 pandemic has been to further accelerate trends that already existed, in areas such as e-commerce, automation and communications, making software development a growth area in hard times. The consequence for programming languages is that the number of developers for each needs to grow for their market share to stand still.

According to the new survey, there are now 13.8 million JavaScript developers (including TypeScript and CoffeeScript), up from 12.4 million last October. That is way ahead of Python, which is number two with 10.1 million; Java with 9.4 million; and C/C++, with 7.3 million. That, we note, means that more than 50 per cent of active developers use JavaScript. They do not use only JavaScript though; more that at least a smidgen of JavaScript is needed in many projects even where the main language might be Java, C# or PHP.

The researchers noted, though, that even in less likely sectors such as data science or embedded development, "about a fourth of developers use it [JavaScript] in their projects."

Python developers have something to celebrate too: its growth rate is 20 per cent, "the highest across all the large programming language communities," the report said. Rust is growing faster but from a smaller base, and now claims 1.3 million active developers, up from 800,000.

PHP, at 6.3 million, has slipped to sixth place behind C# at 6.5 million, after overtaking it in the previous survey. PHP is said to be the most widespread server-side programming language by a huge margin, according to W3Techs, but that is largely because it is used by massively popular content management systems such as WordPress, most of whose users are not developers. The number of PHP developers has grown by only 200K since October.

The number of active C# developers, meanwhile, has increased by 500K. The news is not great for Microsoft, however, since according to SlashData it is most popular in AR/VR development, thanks largely to its use in the Unity platform. The researchers marked it as "little used" in data science and mobile development, suggesting that the company has work to do if it is to make its Xamarin and MAUI (Multi-Platform App UI) technologies a success.

This time around, SlashData looked at emerging technologies with high developer traction. Topping their list was robotics, mini apps, and computer vision. Mini apps are apps embedded in another app, such as those for WeChat or India commerce platform Paytm.

Another area studied was the impact of the pandemic on remote working among developers. "No effect, I've always been remote," said 25 per cent of respondents; but 30 per cent said that they "went fully remote" because of COVID-19 and 11 per cent expect that shift to be permanent.

Digging deeper, it turns out that the biggest employers were the most impacted, with 50 per cent of developers working for employers with over 5000 staff going fully remote, compared to just 25 per cent of those working for smaller firms. There were also regional differences, with the trend toward remote working most pronounced in western Europe, and least pronounced in East Asia. Predictions about the long-term impact of the pandemic on how developers work are of course speculative, but it seems safe to state that there has been a significant permanent effect. ®