'Everything in this industry always goes to schedule and to plan,' he says

Interview Rocket Lab is on a roll, notching up multiple launches and unveiling plans for something considerably grander than its workhorse Electron.

CEO and founder Peter Beck has been on a hat-chewing odyssey of late after a rash promise to eat his headwear should the company attempt to do what it seems to be doing these days.

The first is the recovery of the workhorse Electron booster, which has been responsible for lofting more than 100 satellites into space. Rocket Labs had already managed to return a first stage to Earth in one piece and plans to implement the lessons learned for May's "Running Out of Toes" mission (the 20th Electron launch).

Having fiddled with parachutes as well as guidance through the re-entry corridor, attention has now turned to the heat shield. "The original heat shield was never designed to carry those descent loads," Beck told us. "The last one was a test, and it was great, but it certainly wasn't reflyable."

That said, company engineers were still able to make use of components from the recovered booster. The goal is to have one further iteration of improvements after the next before, as Beck told The Reg, "we'll start catching them with helicopters and putting them back on the pad."

Rocket Lab has been updating the heat shield based on the lessons learned so far. However, the CEO said "the majority, a large portion of the work that we've been doing between the last reusability fight and this reusability fight has been all about requalifying the articles for a new set of environments." 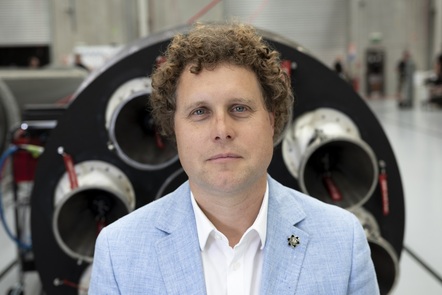 Indeed, the Electron was designed to go up. Coming down in one, reusable piece presents a whole range of exciting issues.

"So you actually have to go back and requalify all of the components for these new load cases. And that takes a lot of work and a lot of time."

A further iteration after May's launch is planned, after which there is hope that Rocket Lab will be able to attempt to catch a descending booster by helicopter, refurbish and then refly it.

"And of course," laughed Beck, "everything in this industry always goes to schedule and to plan."

In what seems a cunning move in light of the events of 2020, Rocket Lab is also finalising plans for a first lift-off from its second launch site at NASA's Wallops Flight Facilty, Launch Complex 2. Currently licensed for 12 launches a year, the pad is complete and hardware is on site. The Electrons to date have launched from New Zealand.

However, Rocket Lab's Autonomous Flight Termination remains a stumbling block as NASA works to certify its software to work with the new system. "This is a Federal range under NASA certification and NASA jurisdiction," explained Beck.

He acknowledged the efforts of NASA, saying the team was working "super hard."

"What we're actually doing here is bringing an autonomous flight termination system to a launch range that has never had it.

"And it should also be said that that piece of work is not just to help us, it's a piece of work that helps the entire industry. So we've really taken one for the team here!

"I certainly hope that history remembers Rocket Lab for all of the efforts and in developing the system for everybody in the future."

The Wallops site is also set to launch the other thing Beck said he would never do – a launcher capable of carrying far heftier payloads than the Electron, the 8-ton class Neutron.

"Our intention is to launch from pad 0A, which is the Antares pad, and the launch vehicle interfaces are designed to interface with that pad."

With the first launch due in 2024, Beck said: "One of the reasons why we can move so quickly is that, trust me, I've built three launch pads now and I know how long they take. And that is like a good third of the programme and the development timeline done."

The Neutron will also borrow heavily from the existing Electron, with avionics and flight computers being ported directly across, further adding to Beck's confidence. "We'll see what challenges are thrown up along the way," he cautioned.

Space, as the saying goes, is hard.

And then there is the landing, which sadly will not feature a giant helicopter snagging a descending booster (although there were proposals to do just that with a Saturn V first stage back in the 1960s). A propulsive touchdown is planned. After the Electron experience, Beck pegged surviving reentry "and getting the vehicle through the wall" as the first challenge, with targeting the vehicle to within a 10-metre radius the second.

Unlike SpaceX, hops are not currently part of the baseline. "That may change," said Beck, "but at this point, we'll be moving straight into just seeing if we can start sticking landing." ®

Catching a falling rocket with a helicopter more complex than it sounds, says Rocket Lab

PowerPoint presentations are all well and good, but for Peter Beck, you can't beat something physical
Science22 Aug 2022 | 19

Rocket Lab is taking NASA's CAPSTONE to the Moon

Everything but the catch: '90s pop act or a successful mission for Rocket Lab?

Is it a bird? Is it a plane? Is it an Electron rocket descending to the ocean?

Interview Everything but catching the thing: Rocket Lab prepares for recovery
Science12 Nov 2021 | 12