But hey, the release looks OK

Fedora 34 is used by Red Hat to try out new features that are likely to end up in first CentOS Stream and then Red Hat Enterprise Linux (RHEL), the commercial offering.

What is new in Fedora 34? The full list of changes is here and includes:

Of these, the introduction of GNOME 40 will be the most visible to users, and the switch to PipeWire should improve audio handling significantly.

Fedora program manager Ben Cotton revealed yesterday that Release Candidate (RC) 1.2 was approved for final release today – though the speed of the approval, with just five hours between the completion of the RC and the meeting to approve it, has caused concern. Cotton has said that he is "starting the conversation about how to prevent this in the future." 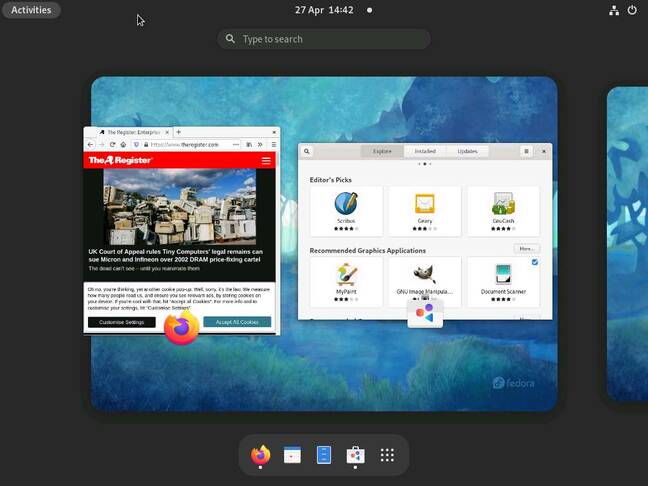 A revamped overview thanks to GNOME 40 in Fedora 34

Spoiling the celebrations, Fedora's main Java package maintainer Fabio Valentini said yesterday: "I can no longer in good conscience be the primary maintainer of (most) Java packages in Fedora."

It is worse than that; in a post entitled "The Death of Java (packages)" he said "new versions and even security issues have been piling up for months," that "Java package maintainers from Red Hat have been exceptionally unhelpful, and have not substantially contributed to Java packages in Fedora in years," that the Eclipse Java-based IDE (the packages for which are maintained by someone else) is a "dumpster fire" and that "I see no way for the situation to improve."

Valentini decided to orphan "all Java packages I am the main admin of" adding that "since this is the majority of remaining Java software in Fedora … I expect a decent amount of dependent packages will be affected." His solution is to "urge affected maintainers to drop dependencies on Java, if at all possible."

Cup of Java bitter for many

Miller and Cotton thanked him for his efforts, while others indicated agreement that maintaining Java is particularly burdensome.

"This is a task that has burned out many people (including me)," said Aleksandar Kurtakov from the Red Hat Eclipse team; while Ankur Sinha from the neuro-sig group (neuroscience research) said "the neuro-sig reached a similar conclusion - that they're just too much work or just pretty much impossible to keep in Fedora. We've now accepted that documenting Java tools and asking users to install them directly from upstream is the most we can manage." 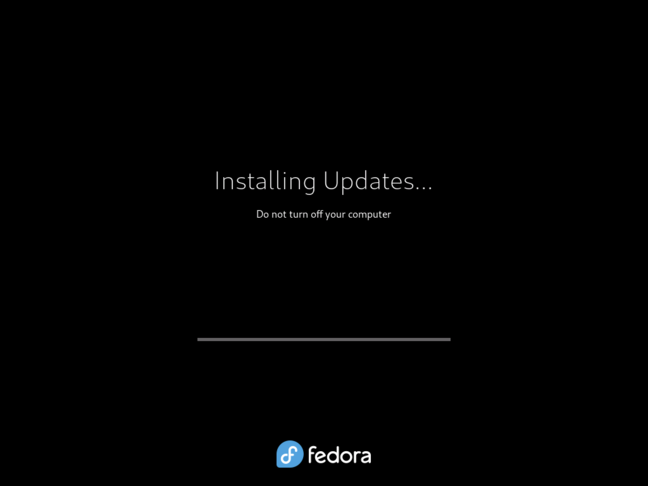 Java is of critical importance in RHEL thanks to its use for many enterprise applications, and it is the third most popular programming language according to a recent survey. Java will of course still run fine on Fedora but this is a warning flag for those relying on the supplied packages.

Leaving that aside, Fedora 34 worked smoothly and looked good in our first try with the new release.

Following publication of this article, Valentini got in touch to expand on his concerns, and explained to The Reg that: "What I refer to as 'Java packages' is only software written in Java – or another language targeting the JVM – but this does not include the OpenJDK packages. The OpenJDK packages themselves are well-maintained."

He also emphasised that while he has dropped maintaining the Java packages, he remains primary maintainer for some 245 other packages "that I'm happy to keep."

The key issue concerns packages such as LibreOffice and Eclipse that depend on Java software other than the JDK (Java Development Kit). In 2019 the original maintainer of Fedora Java packages orphaned them, believing that modularity, which lets maintainers bundle specific major versions of packages with an application, would make them unnecessary. This turned out to be wrong, thanks to "numerous technical issues," so the Java packages were revived and Valentini and others stepped up to help.

Valentini said they were in good shape for Fedora 33, but that in mid-2020 contributions dwindled and stopped, leaving him with an unmanageable burden. Some packages have now been taken over by others, but he still recommends not building packages that rely on Java as "it's a house of cards waiting to come down." Eclipse, he said, is "almost impossible to package" because it "uses its own build system (tycho), leading to a bootstrap problem," and is "really sensitive to minor changes in its dependency tree."