You sure have to press 'A' a lot

The RPG Greetings, traveller, and welcome back to The Register Plays Games, our monthly gaming column. 2021 continues to move slowly for the world's biggest entertainment industry and while we did ask Square Enix for a copy of new looter-shooter Outriders, they blanked us. So instead we are picking up a style of game Square is better known for – Octopath Traveler, originally a Nintendo Switch exclusive now on PC.

The release of Final Fantasy VII in 1997 was a bit of a watershed moment for '80s kids. The main character, Cloud Strife, gazed out moodily from the covers of various PlayStation and gaming magazines for months on end, and we all thought his ridiculous, spiky blond hair and oversized sword were cool as heck. Pretty much everyone who was lucky enough to own Sony's first console grabbed the game, and it continues to hold a special place in the hearts of many.

If you live under a rock, Final Fantasy is pretty much the definitive JRPG (Japanese roleplaying game), a distinct take on the genre mainly characterised by turn-based squad combat, walking about pressing "A" on people and things, and reading a lot of dialogue.

VII was a big deal because it was the first 3D game under the Final Fantasy banner. Not that we knew it at the time. In fact, the question of what happened to Final Fantasy I, II, III, IV, V, and VI was something asked retrospectively via Gameboy, Nintendo Entertainment System (NES), and Super Nintendo Entertainment System (SNES) emulators on our craptops years later.

Square – nowadays better known as Square Enix – had steadily been plying its trade since 1987 but it took VII to make 10-year-olds pay attention. More 3D titles followed: VIII and IX also on the PlayStation, X and XII on the PlayStation 2 (XI was an MMO and doesn't count as a mainline entry), XIII on the PS3 and Xbox 360 (XIV was another MMO), right up to XV in 2016 on Xbox One, PS4, and Windows. The remake of VII also landed in 2020. This doesn't include numerous spin-offs, sequels, and side games for various portable platforms.

At this point you might be wondering how they could keep a series going for so long, but each game featured a different setting and self-contained story, barring X and XIII's sequels, as well as the "Fabula Nova Crystallis" games (including XIII and XV) which claim to share a "common mythos". However, the cliff notes were the same – heavy ladles of dialogue and story, turn-based combat, and pressing "A" a lot – with a few unique mechanics and systems thrown in each time.

But Final Fantasy wasn't Square's only JRPG franchise. Equal measures of nostalgia surround games like Chrono Trigger, Breath of Fire, and Secret of Mana. Even Nintendo's Mario was given the Square treatment with Super Mario RPG on the SNES in 1996.

All the games were beautiful in their own way, particularly those on the SNES, which made the most of the 16-bit generation's capabilities with cutesy sprites and colourful top-down-ish environments. Which brings us to Octopath Traveler and what appears to be Square Enix's attempt to rekindle that old flame with a couple of modern twists. 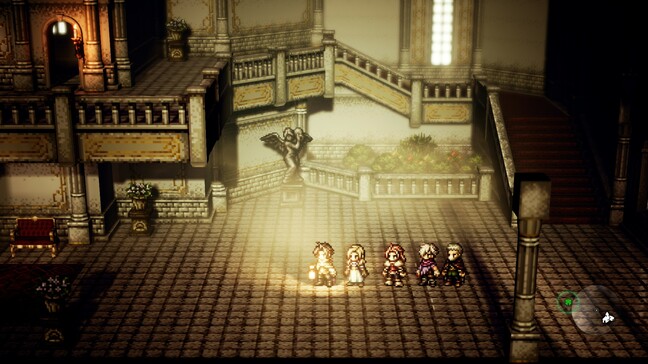 A trap waits to be sprung by the thief Therion

Octopath originally came out as an exclusive for the Nintendo Switch in 2018. Now, I don't own a Switch – not for lack of trying during the first lockdown – but as someone who chipped away at Square's historic RPGs on emulators as a teen, I am very much part of the target audience. In 2019, the game finally came to PC, and this month 50 per cent was knocked off the astonishing asking price (£49.99!!!) on Steam. Since it came heavily recommended by a friend, I decided to take a look. 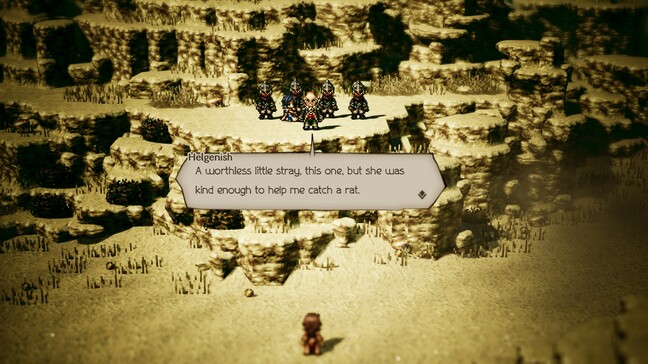 Primrose endures years of indignities in her search for revenge

Octopath is a throwback to classic Final Fantasy in all but name. The game is set on a continent named Orsterra and the opening moments have the player choosing from one of eight characters scattered across the realm's map. Each character fulfils a separate class or role, like mage, cleric or warrior, and each has their own origin story to play through. It doesn't matter which one you pick as you'll have to add each to your party as the game progresses, giving you a chance to see every playable character's motivations, though certain choices make the first chapter a little easier. 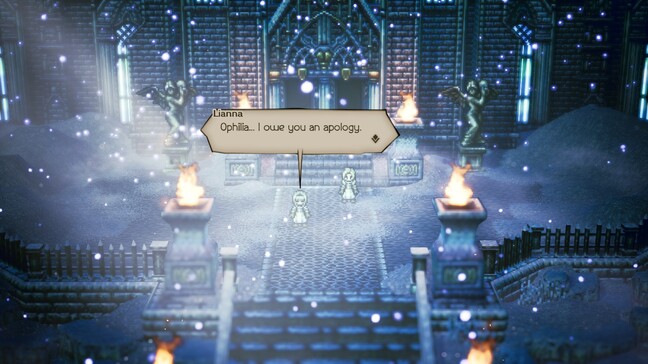 From forest to desert to snow-capped mountains, Octopath has lots of different environments

Cyrus is a knowledge-obsessed mage who leaves his academy in pursuit of a forbidden tome that has disappeared from the archives; Ophilia is a healer-class cleric forced to embark on a pilgrimage in the place of her adoptive sister; Therion is a thief tricked into recovering long-lost treasures for a wealthy family; H'aanit is a hunter who leaves her village to rescue her mentor from a foul beast; Alfyn is an apothecary who wants to roam the world helping people like a healer who saved him as a child; Primrose is a noble disguised as a dancing girl who seeks vengeance for her father's assassination; Olberic is a disgraced hedge knight who finds a path to redemption after the killing of his king; and Tressa is a merchant who simply wants to see more of the world outside her hometown. 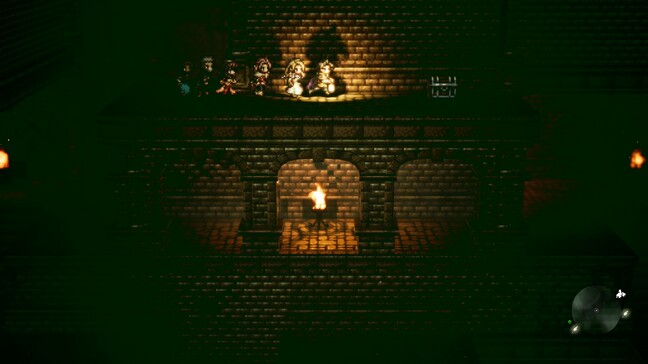 Phew. They aren't the most original or interesting premises ever written, but the storylines become increasingly interlinked as you plod through each chapter. This, we assume, is the titular "octopath". Like Final Fantasy, don't expect this to be a 20-hour job – that's about as long as it takes to collect the full eight-man complement. With four chapters per character and an endgame hiding secret classes and bosses, Octopath could be anywhere from 50 to 100 hours long depending on your ability to grasp the combat mechanics and blend classes and abilities. 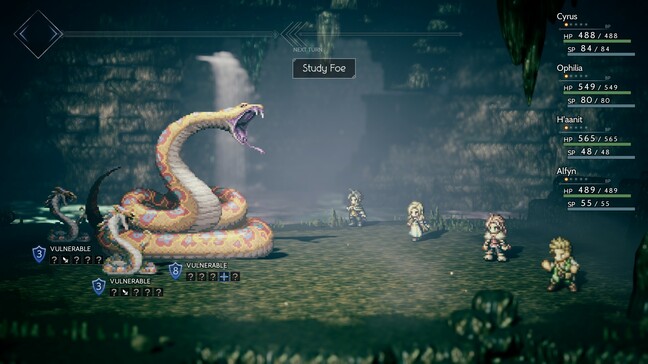 Although 80 per cent of the game is wandering around and spamming "A" or whatever the key binding might be through reams of frankly quite tedious exposition or dialogue, the battles are where Octopath shines – and they're no walk in the park either.

As for those "unique mechanics" I mentioned, Octopath employs a weakness system where enemies and monsters have layers of protections vulnerable only to a handful of weapons or spells. Once these shields have been worn down, the enemy is weak to everything you throw at it, and figuring out how to exploit these flaws across multiple enemies with differing vulnerabilities at the same time is puzzle-like and exciting. There is also a cool "boost" mechanic where, if players save characters' points each turn, they can power up attacks to do far more damage. 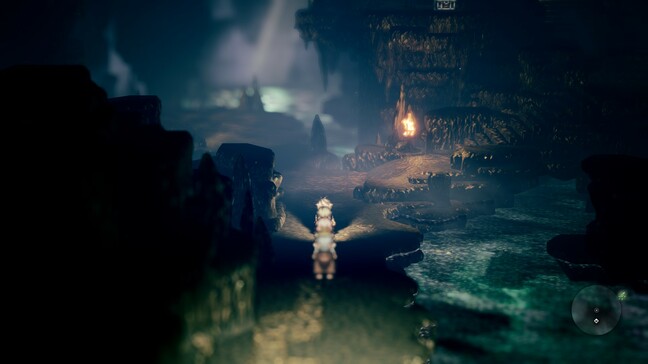 The '2D-HD' graphics give extra depth to each scene

Unfortunately, catering to nostalgia can only go so far. The developers refer to their neo-retro look as "HD-2D", which is a little reminiscent of what the Valheim and Touryst (also first a Switch exclusive) teams have done – sprinkling advanced lighting and particle effects on top of some quite basic underlying graphics. The character sprites could have been lifted from Final Fantasy VI, but the environments are 3D polygonal. While pretty, the novelty wears off and soon it feels like you may as well be playing a SNES title.

There's nothing wrong with that in itself, but if you compare Octopath Traveler with the also story-heavy Final Fantasy XV, the latter's stunning visual fidelity makes the onerous and complex plot a lot easier to swallow. Octopath lacks any such benefits, and at many points I wanted to skip through the constant yakking and reading just so I could get to some battles or a boss fight. A lot of the dialogue is fully voiced in the game's more dramatic scenes, but after a while characters fall back to spouting little grunts, groans or phrases, leaving you to read what they're actually meant to be saying. 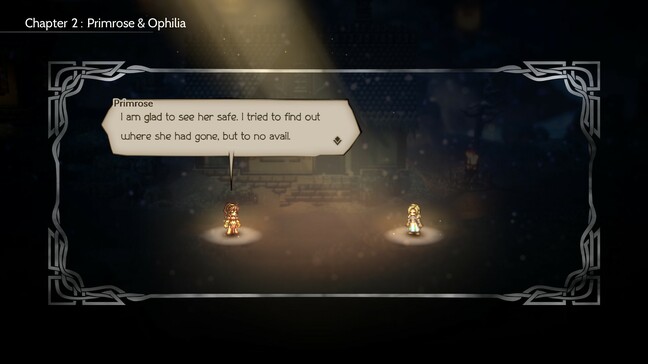 And that means a lot of pressing "A" while not much is happening. That said, dedicated JRPG fanatics chasing a hit of nostalgia will have already completed Octopath Traveler years ago, but for everyone else huge doses of patience are required – otherwise the game can be rather annoying and certainly isn't worth paying full price. ®

Rich streams on Twitch as ExcellentSword every Monday, Wednesday, Friday, and Saturday from 8:30pm UK time. Column subjects usually end up on stream, so chuck him a follow to see how the games actually play, have a chat, or simply marvel at his luxuriant, golden beard.