The spent booster stage responsible for placing the first module of China's next space station into orbit is set to make an uncontrolled rendezvous with Earth.

The first module of Tiangong-3, "Tianhe", was launched at the end of April atop a Long March 5B rocket and is currently safely in orbit.

The same, alas, cannot be said for the Long March 5B (CZ-5B), which features a core stage and four strapped-on liquid fuelled boosters. The rocket is capable of injecting a payload directly into low Earth orbit but, unfortunately, does not appear to have much in the way of self-disposal.

Many conventional rockets use a disposable first stage (or reusable, in the case of SpaceX) that do not make it to orbit. Subsequent stages (such as the kick stage used by Rocket Lab) can then deorbit themselves in a controlled fashion after depositing payloads.

China appears to do things a little differently.

The launch of Tianhe was the second of the 5B variant of the Long March 5 series. The first, in 2020, also resulted in the spent core stage making an uncontrolled re-entry in Earth's atmosphere. Hopes that perhaps it would be second time lucky, and a de-orbit manoeuvre might be on the cards, appear to have been dashed and a grim lottery is underway with regard to where the remnants might hit.

The problem is that spent core stage is massive, measuring approximately 30 metres long and five metres wide. Estimates peg the stage as weighing just over 20 tonnes. There is therefore a very good chance that some parts will survive the heating of re-entry and be scattered over a wide area.

The good news is that that area will probably be over the ocean, but since the rocket appears to be tumbling out of control, observers will be unable to predict with more accuracy until nearer the time. The current best guess is that it will re-enter at around 0100 UTC on 10 May, but a hefty 41-hour period of uncertainty exists on either side of that.

Astronomer Jonathan McDowell tweeted a plot showing the decay of the core stage, but had comfort for those worrying about a Chelyabinsk-style event. Far less kinetic energy is involved in this instance – "worst case," he said, "is like a small plane crash."

Reassuring, but still small comfort for anyone unlucky enough to encounter whatever components survive.

This morning's Tianhe altitude plot; the Tianhe space station remains in a 352 x 385 km orbit. The CZ-5B core stage has decayed from an initial 170 x 375 km orbit to 165 x 326 km; drag at perigee causes a reduction of apogee. pic.twitter.com/X0ZQIiEqUE

As well as its spent rocket bodies, China has also lost control of the odd spacecraft over the years: its first space station, Tiangong-1, memorably tumbled out of control and caused a few squeaky bottoms before its remains splashed down harmlessly into the Pacific Ocean. 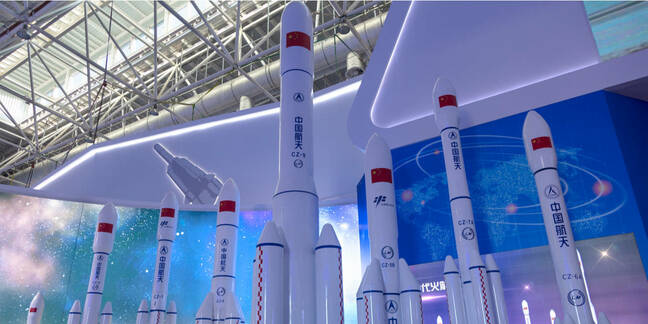 To be fair to China, it is not alone in sending space junk hurtling back to Earth in an uncontrolled fashion. Russia's Salyut 7 space station had its own issues in 1991 while pieces of NASA's Skylab memorably smacked into Australia in 1979. And then there was the Columbia accident. However, according to McDowell, "Before the CZ-5B started flying there were NO 'by design' uncontrolled reentries above 10 tonnes since 1990"

And, of course, the country does have somewhat of a reputation when it comes to rocket parts hitting the ground following launch. Allowing yet another hefty chunk of space junk to tumble back to Earth will do that reputation no favours. ®