Safari savaged for falling behind in web APIs

Epic Games and Apple faced off in an Oakland, California, courtroom on Monday to resolve the gaming giant's antitrust claim that Apple's App Store represents an illegal monopoly.

Epic last year sued Apple after being denied the ability to sell digital goods for its Fortnite game using its own payment service rather than Apple's In-App Payment API. If Epic prevails and Apple's inevitable appeals get rebuffed, the power of digital platform owners to dictate the terms of market participation will be significantly diminished, in America at least.

On Friday, Alex Russell, a software engineer at Google – and the big G is also being sued by Epic for Play Store restrictions – personally published a rebuttal to one of the central tenets of Apple's defense – that developers can compete with iOS apps by making web apps.

Apple has argued as much to the Australian Competition and Consumer Commission [PDF], starting that Progressive Web Apps (PWAs) represent a viable distribution alternative to the App Store. Apple CEO Tim Cook made a similar claim last year in Congressional testimony. He said that Apple is not the sole decision maker for web apps, suggesting the web offers a viable alternative distribution channel to the iOS App Store.

And Apple put forth that same argument in its opening materials for Epic v. Apple, with a slide that declares, "Epic's Theory is Based on a False Premise."

It depicts The Financial Times' web app and native iOS app side by side, the almost identical designs suggesting the two are interchangeable. 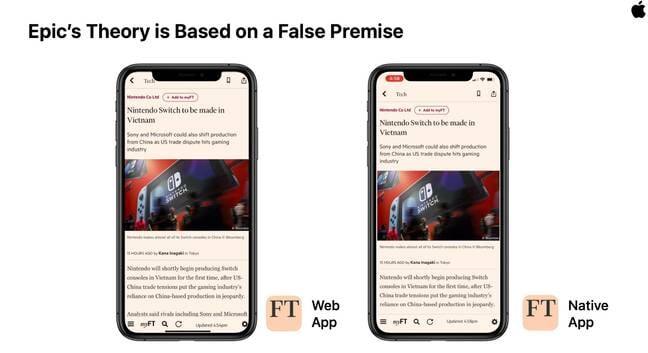 In fact, web apps and native apps are distinctly different in their technical capabilities, and Russell contends Apple's glacial pace of integrating modern web APIs into Safari and its WebKit rendering engine have left web apps, on iOS devices at least, unable to compete with native iOS apps.

"Apple's iOS browser (Safari) and engine (WebKit) are uniquely under-powered," he writes. "Consistent delays in the delivery of important features ensure the web can never be a credible alternative to its proprietary tools and App Store."

Certainly among web browsers there's limited room for competition and differentiation on iOS – Apple requires all mobile web browsers on iDevices to use its WebKit rendering engine. This makes the iOS versions of Brave, Chrome, and Edge (Chromium-based, with the Blink rendering engine), and Firefox (based on the Gecko rendering engine) essentially clones of Safari under the hood.

But where web browsers face a level playing field upon which no competition is allowed, web apps risk being tripped up by Apple's indifferent groundskeeping while their native app counterparts race in paved lanes.

For Russell, performance isn't really an issue. He concedes that all modern browsers are fast because there's not that much more speed to be eked out after two decades of web tech rivalry.

"In almost every area, Apple's low-quality implementation of features WebKit already supports requires workarounds," he writes. "Developers would not need to find and fix these issues in Firefox (Gecko) or Chrome/Edge/Brave/Samsung Internet (Blink). This adds to the expense of developing for iOS."

Apple's web gap can also be measured in terms of APIs. By Russell's count, Safari has been failing further and further behind in implementing web APIs, which make specific technical features available to developers. Safari is now something like 1000 APIs behind Chrome, double the gap measured in 2016, and 300 or so behind Firefox.

Russell allows that in some instances, Safari has outpaced Chrome, like implementing the Storage Access API as a privacy measure. However, he takes the opportunity to skewer Apple for botching the job, noting that its initial implementation created a worse tracking vector before it was repaired.

There are, Russell insists, multiple crucial features available on every other operating system that Apple doesn't support in iOS. These include things like: Push Notification, PWA Install Prompts, Media Session API, Navigation Preloads, and maybe 20 other technologies that have the potential to enable new classes of applications on the web and new businesses.

Russell concludes that Safari/WebKit lags the competition in terms of compatibility and features, "resulting in a large and persistent gap with Apple's native platform."

Epic has advanced a version of this argument in its case against Apple by citing a deposition from Scott Forstall, former Apple SVP of iOS Software, in which Forstall asserts that native apps provide a better experience than web apps.

An in his opening day trial testimony, Epic Games CEO Tim Sweeney made a similar point. "Web apps are not nearly powerful enough to run a modern 3D experience such as Fortnite," he said.

If District Court Judge Yvonne Gonzalez Rogers – who will decide the case instead of a jury – finds merit in this claim and concludes the App Store is an unlawful monopoly, Apple's iOS walled garden and others like it could crumble.

The Register asked Apple for comment and also inquired to /dev/null. Both responded exactly the same way. ®