The Rocky Linux project, kicked off by original CentOS founder Gregory Kurtzer, has released RC1 of its distribution, which aims to be 100 per cent compatible with Red Hat Enterprise Linux.

Rocky Linux was founded almost at the same moment when Red Hat, along with the CentOS board, stated last December that it was shifting its investment from CentOS Linux to CentOS Stream.

CentOS Linux, a downstream build of the Red Hat Enterprise Linux (RHEL) source code, is of more use to the community than Stream, but it yielded less value to Red Hat. It is a big deal, since CentOS is widely used and is the most popular of the rpm-based distros according to most surveys. OpenStack, for example, reported 40 per cent of its users using Ubuntu, 28 per cent CentOS, and 19 per cent RHEL.

The distro is not the first of the new CentOS alternatives off the mark though. AlmaLinux, sponsored by CloudLinux, achieved its first stable release at the end of March. The schedule for Rocky Linux has slipped a little: the RC1 release was planned for March 31st, but was postponed by a month, the reason given being the establishment of the Rocky Enterprise Software Foundation and efforts to protect the new distro from being diverted from its original goals in the same way as its predecessor.

CentOS project changes focus, no more rebuild of Red Hat Enterprise Linux – you'll have to flow with the Stream

The RC1 release is offered for x86_64 and aarch64 (ARM) architectures. The team insisted that: "Under no circumstance should you use a release candidate in a production environment. A release candidate is provided for testing and validation purposes only."

Nevertheless, they said: "We have a true open enterprise community operating system", though added that there is more to do, "from testing and validation of the core OS to the refinement of our build infrastructure and special interest groups."

We installed the RC1 build on a virtual machine and it is an unexciting as you would hope. The EULA (End User License Agreement) is short, saying that "Rocky Linux 8 comes with no warranties or guarantees of any kind, written or implied," and indicating that it is released as GPLv2. The goal of Rocky Linux is to be compatible with RHEL, not to do something new in the Linux world. 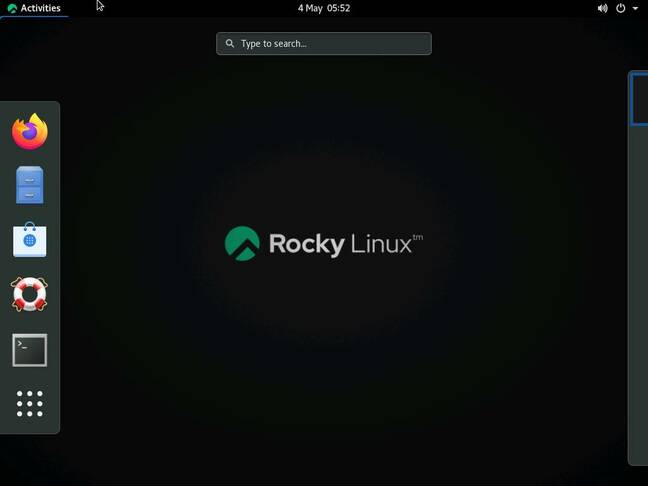 The most common community question seems to be: when will there be a stable release? No date has been set, other than the initial target of "second quarter 2021", and how soon it is will depend on the outcome of testing for RC1. CentOS 8, the last version, remains supported with updates until the end of 2021, and it should be possible to switch to Rocky Linux (or indeed to CentOS Stream) without a re-install.

Sponsors of Rocky Linux include Ctrl IQ (an HPC company whose CEO is Gregory Kurtzer) storage suppliers 45Drives and OpenDrives, embedded Linux company MontaVista, and AWS, which is hosting the build infrastructure for Rocky Linux.

As a free version of RHEL, Rocky Linux depends on the continuing success of Red Hat Linux for its appeal. According to open source advocate Simon Phipps, who spoke to us about AlmaLinux, "Community downstreams of RHEL created the market that Red Hat then monetized."

Phipps sees the existence of free, compatible distros as beneficial for the RHEL ecosystem. That will now continue, though former and current CentOS users face choices between licensing RHEL, or switching to CentOS Stream, Rocky Linux, AlmaLinux, or something else. ®