Microsoft has gone to great lengths to push its tech, but survey suggests many devs slipped through the .NET

Among the findings, WPF remains most-used desktop framework despite years of promotion for UWP

The Microsoft-sponsored .NET Foundation has released a survey-based "State of .NET" report showing that efforts to broaden the appeal of the technology beyond its own platform have had limited success so far.

The .NET Foundation was set up by Microsoft in 2014, around the time that the cross-platform and open-source .NET Core was first announced, the idea being to support the .NET ecosystem.

Between November 2020 and March 2021, it conducted its first survey of .NET developers, the results of which have just been made public.

Despite the lengthy time during which the survey was available, it only managed 4,509 responses, perhaps indicating that the foundation remains relatively low profile. A recent report estimated that C#, the main .NET language, is used by around 6.5 million developers worldwide. Note that most percentages in the survey sum to more than 100 per cent because of "check all that apply" questions.

It is possible that the survey reached a group skewed towards the most enthusiastic .NET developers. Over 60 per cent said they target .NET 5, the current version, even though it is set to go out of support less than a year from now, in February 2022. Only around 42 per cent said they target the Windows-only .NET Framework. 18 per cent work with Mono, and around 7 per cent with UWP (Universal Windows Platform) – suggesting that Microsoft never managed to persuade developers of the benefits of its "modern" application platform.

A revealing question asked "Which .NET App Models do you use?" The top choice is ASP.NET Web API, which fits with the modern trend towards microservices, but there were a few surprises too. One was that the top choice for GUI desktop frameworks is Windows Presentation Framework (31 per cent), closely followed by Windows Forms (28 per cent). This is despite Microsoft having almost frozen development of those frameworks, though there has been a little bit of activity in the last couple of years with adding .NET Core support and open-sourcing the code.

Despite Microsoft's energetic promotion of UWP, developers have chosen to stick with these older frameworks. The official direction is now towards another new thing, WinUI 3 and Project Reunion, though this did not feature in the survey, presumably because it remains in preview.

Another notable point is the high interest in ASP.NET Blazor, which lets developers code both client and server code for web applications in C#. The technology has also been adapted for mobile and desktop applications. Around 27 per cent of respondents said they use Blazor, slightly ahead of the Razor Pages framework on which Blazor is in part based, though behind ASP.NET MVC (52 per cent).

Blazor also figures high in the list when developers were asked what Single Page Application (SPA) framework they use – a popular approach to web applications.

Angular topped the list with 31 per cent, but Blazor came second (28 per cent), just ahead of React (27 per cent). 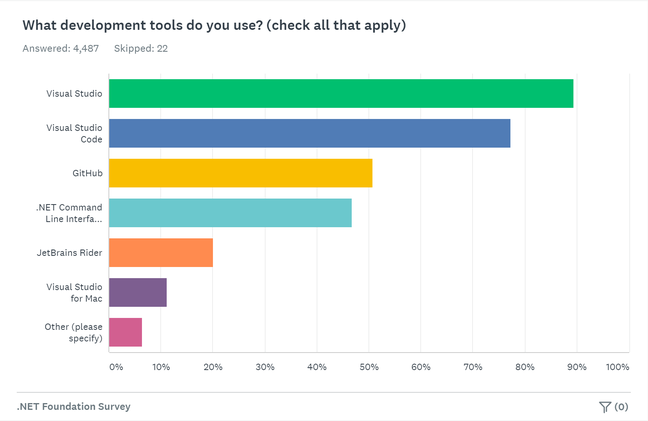 Nearly 90 per cent of .NET developers use Visual Studio, but VS Code is not far behind

Questioned about developer tools, there were two points to note. One is that 89 per cent report using Visual Studio, a Windows-only development tool (Visual Studio for Mac is covered separately). The implication is that efforts to take .NET to developers working on Mac or Linux are having limited success – though the cross-platform VS Code is used by 77 per cent of respondents.

It is a shame the survey did not break this down into more detail, but it is obvious that many .NET developers use both VS Code and Visual Studio, either because VS Code is actually a better fit for some tasks, or because they also develop on non-Windows desktops. JetBrains Rider, the only non-Microsoft IDE specified, achieved a respectable 20 per cent penetration.

Honestly, I'm a member and other than contributing to .NET projects I'm not sure what we do

The .NET Foundation also asked developers about itself. "Most people are either positive or neutral in their rating of the .NET Foundation," is how the organisation chose to interpret the figures, but while this is technically true of the survey responses, it is arguable that the relatively small number of respondents show that "most people", even .NET developers, have low awareness of it.

Even among those surveyed, 30 per cent said they "neither approve or disapprove" of what it does. The most revealing part of the survey in this respect came in the comments, which can be read by downloading the raw data. "Honestly, I'm a member and other than contributing to .NET projects I'm not sure what we do," said one. Another said: "I don't know what is the role of .NET foundation yet compared to CNCF or Apache."

On the positive side, the existence of the foundation is associated with the open-sourcing of .NET, which a developer said was "one of best events that happened in history of software," and many comments also approve of the attempt to promote .NET beyond Microsoft.

This last point, the relationship between .NET and Microsoft, is the heart of the matter. The origins of .NET are in the company's desire to improve Windows development. Today one might say "Windows and Azure", but keeping developers on Microsoft's platform remains part of the strategy. That sits uncomfortably with the effort to promote .NET as cross-platform. "The current .NET docs scream Azure every chance they get and are toxic for developers trying to use .NET in other clouds. If we want to attract more .NET developers this has to change," said one respondent.

"-The current .NET docs scream Azure every chance they get and are toxic for developers trying to use .NET in other clouds

Many developers would also like to see the foundation represent their interests in terms of steering the direction of .NET, and comments reflect that. "The role of the .NET Foundation is not to take feature requests, but we can facilitate the proper channels for all of our member projects," said the organisation in response.

Another section of the survey looked at .NET developer demographics. We discover that 92 per cent of respondents are male, and 4 per cent prefer not to say, among the most extreme examples of gender imbalance. 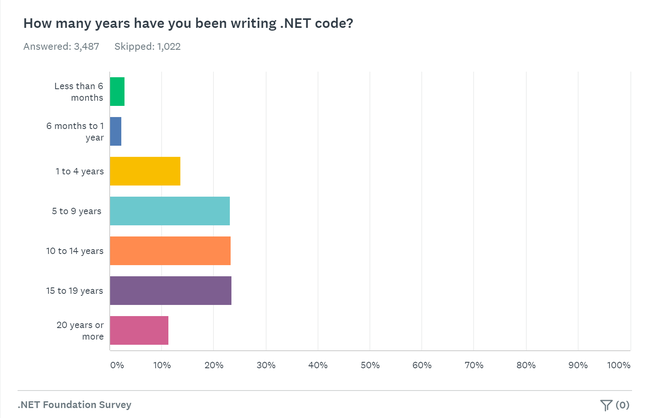 .NET developers are loyal, but the influx of new developers is relatively small according to this survey

StackOverflow reported in its own survey last year that "among the respondents that code professionally, almost 92 per cent are men." Another notable point is that 12 per cent of respondents have coded with .NET for "20 years or more," which means more or less from first launch; .NET 1.0 was released in early 2002. At the other end of the scale, about 19 per cent of respondents have been coding for .NET four years or fewer. Perhaps the relatively small sample has skewed the figures, but it would be healthier for the ecosystem if the number of new entrants were higher.

The open-sourcing of .NET, its transformation into a cross-platform technology, and the creation of the .NET Foundation were remarkable turnarounds for Microsoft, which was once suspicious of open source and keen to keep developers on Windows. At the same time, it is obvious that the company could do more, if it chose, to support .NET beyond its own platform – and that giving the foundation more influence over its direction would be a good start. ®