Stale and past its best. Are you talking about Windows or the pizza you're waiting for?

Bork!Bork!Bork! There are certain things that do not belong in pizza. One is pineapple. Another is the Windows Start Menu.

Spotted by Reg reader Dean K, who was making an essential journey to collect the steaming disc of doughy delight from a well-known cheese-and-tomato bread slinger, the screen that would normally tell customers how long they had to wait was flashing something altogether more worrying.

In this instance, it was the Windows Start Menu from long ago. Long removed from current versions of the operating system (although Microsoft has continued to find ways of reintroducing it without admitting that the unmitigated disaster of the Windows 8 user interface was anything other than an adventure in touch-first design), the old thing is showing its wares for all to see. 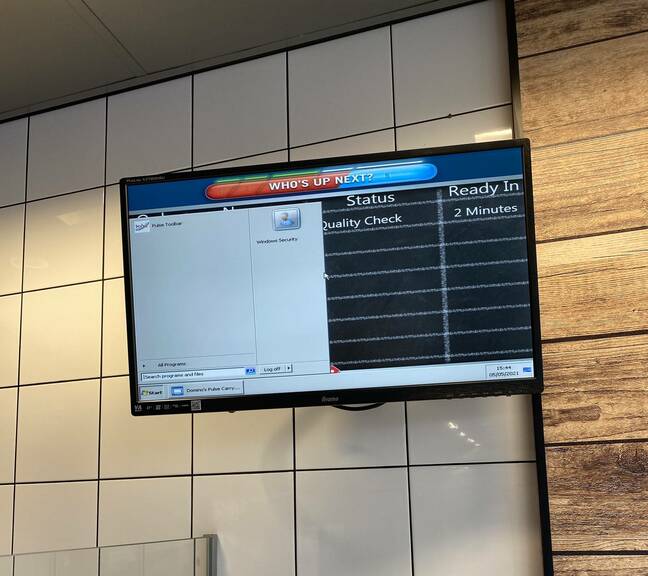 Guess the version of Windows...

The shell on show looks to us to be Windows Server 2008, which met its Waterloo along with its stablemate Windows 7 at the beginning of 2020. This was back when queuing for a pizza lacked the mask-based paranoia of today. Then, a cough from the staff might mean some unexpected augmentation for the toppings rather than the swab up the nose of today.

As for "Who's Up Next?", the answer is Windows Security. Presumably somebody back at the mothership has clicked somewhere they shouldn't. The result? An impressively trim and tidy Start Menu.

And there seems to be every possibility that it is indeed Windows in the queue. After all, the next step is "Quality Check", and the product is expected in two minutes. As many a victim of Microsoft's decidedly iffy approach to quality over recent years might sigh: "Two minutes for a Quality Check? That long?"

Still, at least there'll always be pizza on which to chew. Hopefully not as stale and old as the version of Windows flaunting itself in the pizza parlour. ®