What is Geordie for bork?

Bork!Bork!Bork! It's a blessed respite for Microsoft's wares today as it appears that it is Java's turn to disgrace itself on platform 1 of Newcastle upon Tyne's Central Station.

In this case it is the Java Platform SE binary that has fallen over. The version of Windows on which it is running looks decidedly old hat to us, and eagle-eyed Reg reader Dan who sent us the snaps said fans of obsolescence will be delighted to learn that Windows XP splash screen can also occasionally be seen on the screens of some ticket gates.

Be that as it may, the Windows shell on display looks decidedly out of date. We can only hope that the same does not apply to the Java licence, otherwise the next train might be stuffed full of lawyers of the big and red variety. 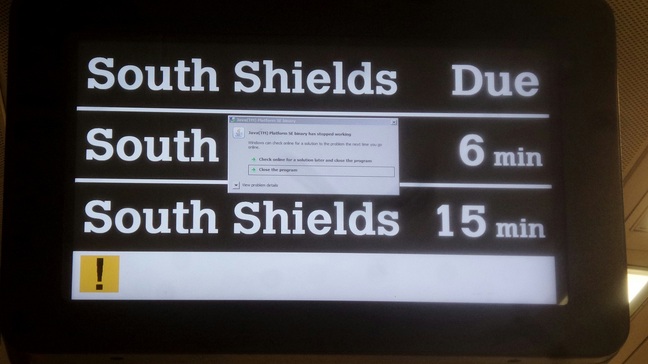 The platforms at Central Station underwent a revamp in 2015, part of a scheme that was also aimed at giving the ticket hall a facelift. At the time, Nexus (the agency responsible for transport in Tyne and Wear) said: "The project at Central Station will give the Metro concourse and platforms a vibrant, clean and more modern appearance."

Because, after all, nothing screams "modern" like a borked bit of digital signage. Even if "modern" is not the word one would use to describe that particular flavour of Windows.

As for what might have befallen Java, it's hard to know. Windows is clearly keen to go online and look for a solution (although we can count the number of times that's helped on the fingers of a lamppost), but in this instance our money would probably be on something amiss with a video driver.

Quite why one would need the combined lard of Windows and Java to tell punters that the next train to South Shields will arrive soon is anyone's guess. We assume it is just the modern way of doing things. ®