Probable cause of accident and fire still under investigation

The US National Transportation Safety Board (NTSB) has published a preliminary report into last month's fatal crash involving a 2019 Tesla Model S in Texas.

The crash happened at approximately 21:07 local time on 17 April this year. Two men entered the car, one in the driver's seat and the other in the front passenger seat (according to home security camera footage).

The Tesla then drove off, travelled about 167 metres before leaving the road on a curve, driving over a curb, hitting a drainage culvert, a raised manhole and a tree, the report found.

A fire started in the Tesla's battery, which had been damaged in the crash. The conflagration destroyed the car, including the storage device housed in the infotainment console, although the restraint control module (which records data relating to the vehicle's speed, acceleration, belt status and airbags) was recovered and is being evaluated, NTSB added.

The crash and fire resulted in fatal injuries for both occupants. The driver was 59 and the passenger 69.

"The NTSB’s investigation of the crash is ongoing, and investigators continue to gather information including data to analyze the crash dynamics, postmortem toxicology test results, seat belt use, occupant egress and the post-crash fire," the report added. 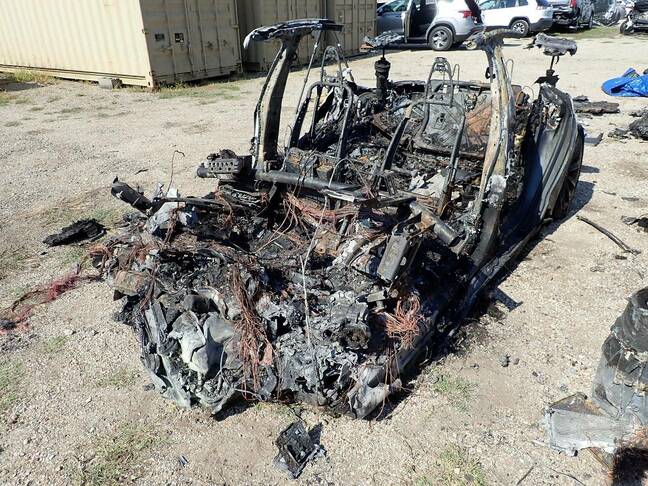 Authorities commenting at the time remarked that the positioning of the bodies following impact indicated that nobody was driving the vehicle, although Tesla boss Elon Musk tweeted that logs recovered indicated that Autopilot had not been enabled.

Musk also pointed out that lane lines were required for "standard" Autopilot. In its report, the NTSB stated: "The roadway was equipped with streetlights but did not have lines to define the travel lanes."

The Tesla in question was equipped with Autopilot, which requires both the Traffic Aware Cruise Control and the Autosteer systems to be engaged. The former is a jumped-up cruise control, which deals with acceleration and deceleration while the latter assists with lane keeping. The NTSB showed in tests with an exemplar car that the latter also could not be engaged on that part of the road.

Tesla's Autopilot has come in for criticism, most recently by the US Consumer Reports organisation, which found it was possible to use the system without a human sat behind the steering wheel in a Model Y. Musk's boasts regarding the self-driving capabilities of Teslas have also recently been scrutinised by the California Department of Motor Vehicles (DMV).

The DMV's concern was around communication to the public regarding the true capabilities of Tesla vehicles and ensuring that customers understood the limits of the technology. A number of fatal crashes have been attributed to over-reliance on vehicle automation by drivers.

As for last month's accident, the NTSB is continuing to work to determine the probable cause "with the intent of issuing safety recommendations to prevent similar crashes." The National Highway Traffic Safety Administration and Tesla are supporting the NTSB with the investigation.

A parallel investigation by the Harris County Texas Precinct 4 Constable's Office is also under way. ®