ESA, CSA and NASA's James Webb Telescope opened its giant primary mirror one last time on Earth ahead of being packed up for long awaited launch later this year.

The 6.5m structure, comprised of 18 hexagonal mirrors, was commanded from the Northrop Grumman testing control room in California to expand and lock itself into place in the same way it will in space. The only difference will be the addition of some equipment to simulate the gravity (or lack thereof) of where it will spend its operational life.

The test is the team's final checkpoint in a series of qualifications aimed at ensuring the telescope and its multitude of parts (including the 132 actuators and motors used to deploy and focus the mirrors) will withstand the rigours of launch and a lengthy mission near the Earth-Sun L2 Lagrange point. 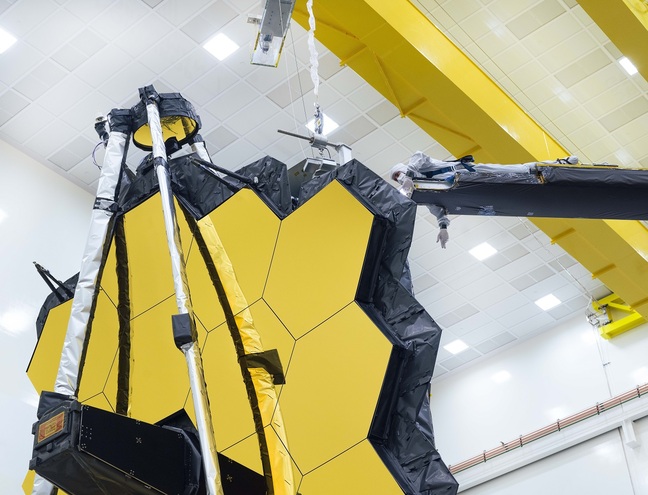 This is handy because, unlike its predecessor Hubble, there is little scope for a rescue mission should things go south in space. Controllers will face a nail-biting wait from the ignition of the Ariane 5 rocket that's due to launch the telescope to when the telescope completes the trek to its halo orbit around L2 and its systems commissioned.

It has been a lengthy and expensive journey to this point. Originally scheduled to enter service in 2007 at a cost of less than a billion dollars, impressive delays and cost overruns have nudged things to the $10bn mark. Then again, building and launching an observatory of this scale, with ambitions to look for light from the very first stars and galaxies in the universe, does carry its own unknowns.

A final few tests are needed before the observatory is packed up for its trip to Arianespace's French Guiana launchpad. Two radiator assemblies must be extended and restowed and full extension of the deployable tower must be accomplished. The latter, a thick black pipe made of graphite-epoxy composite material, is critical for supporting the structure of the spacecraft and includes two telescoping tubes. It will separate the telescope mirrors from the spacecraft bus.

The delays have meant that the telescope will be launched as the Ariane 5 rocket nears the end of its working life; the veteran booster is to be phased out in favour of the Ariane 6 over the coming years.

Should all go well, that launch will finally take place just over five months from now, at the end of October 2021. ®