Google has flicked "publish" on its Android 12 beta, with the bleeding-edge OS winging its way to enrolled devices.

With the version number, Google has taken an axe to the core Android experience, emphasising personalisation while cribbing some privacy-centric features from Apple.

The stock Android experience has remained largely unchanged since the introduction of Android 5.0 Lollipop in 2015, save for the occasional tweak. Lollipop brought Google's Material Design, which conglomerated a set of design guidelines, reusable components, and icons into a single monolithic package.

Google has extended this in Android 12 with Material You, which aims to replace the otherwise static Material Design with a degree of personalisation.

We say a "degree" because Google has attempted to strike a delicate balance between giving users free rein with their phones and a more locked-down approach. Instead, it automatically adjusts the colours of certain system UI elements and widgets based upon the user's wallpaper. 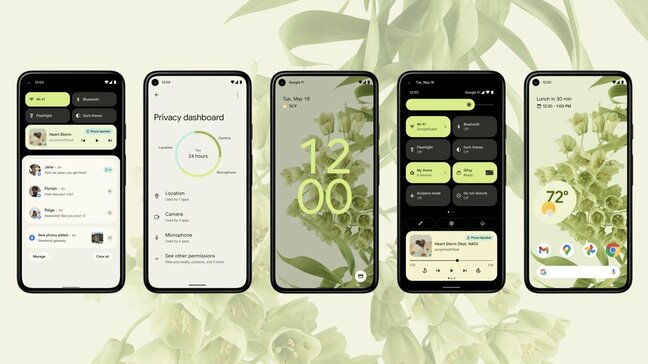 "Using what we call color extraction, you choose your wallpaper, and the system automatically determines which colors are dominant, which ones are complementary and which ones just look great. It then applies those colors across the entire OS: the notification shade, the lock screen, the volume controls, new widgets and much more," the Chocolate Factory explained in a blog post.

Ignoring the fact that Google didn't make up the term "color extraction," this approach represents a sensible middle ground between addressing the widespread desire for a more bespoke experience and preventing the core Android from looking like a MySpace page circa 2006.

Other UI tweaks are less immediately evident but still welcome. System spaces – such as the pull-down Quick Settings dashboard and the lock screen – have been completely rebuilt to better use display real estate.

And then there are the expected incremental performance tweaks. Google claimed Android 12's core system services use 22 per cent less CPU time, with the utilisation of high-performance "big" cores reduced by 15 per cent.

Privacy has featured in the Android 12 beta. Google has added new visualisation tools to identify how often an app accesses the device's sensitive permissions – such as the camera, microphone, or location services. There's also the option to turn off camera and mic access for all apps in the Quick Settings dashboard. Some phones, like the Purism Librem 5, accomplish this with dedicated hardware switches.

Additionally, Google has cribbed the microphone and camera indicator light first introduced last year in iOS 14. It works much the same way, providing a visual warning to end-users against surreptitious recording.

Android 12 has also seen privileged information – like that used in machine learning tasks – pushed to a segmented part of the operating system. Dubbed Private Compute Core, this will handle data used for live transcriptions and smart text suggestions.

Despite the name, Private Compute Core isn't a physical piece of hardware located on the circuit board, like Apple's T2 chip.

Google has already begun rolling out the Android 12 beta to enrolled end users. This time around, you don't necessarily need a Google Pixel phone. Devices from 11 different manufacturers are eligible – including Realme, TCL, OnePlus, Xiaomi, and Oppo. ®