Updated Toolkit, new Developer Portal, custom Together Mode themes ... but not what users ask for most

Build Microsoft has introduced new features and developer tooling for Teams, calling it (along with Microsoft 365) a platform for "a new class of apps designed for hybrid work."

Teams, according to the company's latest architectural diagram, is the user experience (UX) layer in a platform that uses Azure Active Directory for identity, Microsoft Dataverse and the Microsoft Graph for data, and Power Platform for logic. 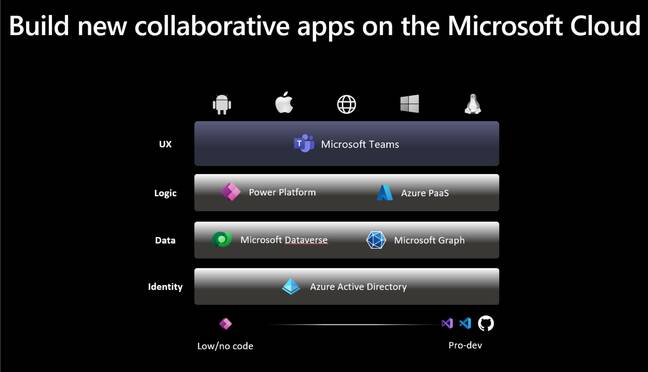 Teams as the UX layer in Microsoft’s 365 platform

Newly introduced at Build is a public preview of what the company described as shared stage integration, the "stage" being the main window in a Teams meeting. The integration enables developers to build applications such as whiteboards and project boards that appear in this area, so that all meeting participants can interact.

Microsoft is also introducing what it calls Together Mode extensibility, which is the ability to create custom scenes for meetings. Unlike a custom background, which applies only to a single participant, a custom scene is for the whole meeting. Together Mode (itself still in preview) uses AI to position people on a shared background. The new feature will enable companies to place attendees in a virtual version of their own boardroom, or in more exotic environments according to taste.

Tooling for Teams development is being enhanced, with a new version of the Teams Toolkit for Visual Studio and VS Code. New features include integration with Azure Functions, for running code on a serverless platform in Azure, simplified integration with Microsoft Graph, and integration with the SharePoint Framework (SPFx).

SPFx is also being extended to support web parts (components) based on Microsoft Viva, a platform for employee-oriented resources such as training and knowledge management.

Microsoft is also introducing a Developer Portal for Teams, an update and rename for the existing App Studio. The Developer Portal, now in preview, is "the primary tool for configuring, distributing, and managing your Microsoft Teams apps."

Here, developers can register applications, add environments which enable global variables, and test and preview Teams applications. There are also metrics on usage. 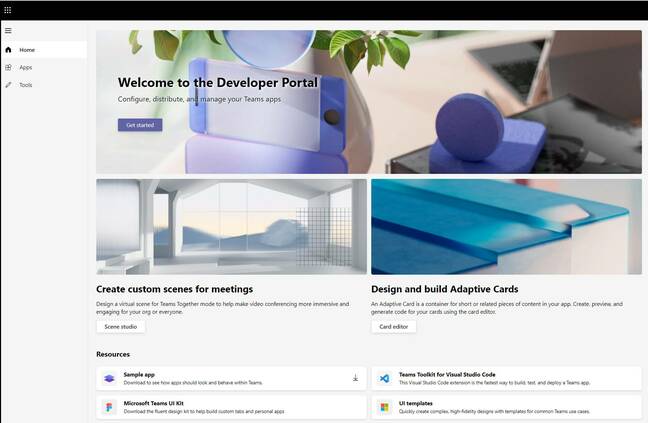 The new (or revamped) Developer Portal for Teams applications

New media APIs, expected this summer, will include real-time access to audio and video streams for purposes such as transcription and translation, as well as what the company calls "insights gathering."

From a technical perspective, a notable addition to Teams is Fluid components in Teams chat. Fluid components build on the Fluid Framework, which we looked at in detail here, a system for collaborative real-time editing that is much faster and lighter weight than the co-authoring features which are part of SharePoint and Office. Using Fluid in Teams means users can embed tables and lists that others can edit. In theory it could be handy for things like deciding the agenda for a meeting, or brainstorming a to-do list. Fluid components can be copied and pasted between chats, Microsoft said.

What do users most want from Teams?

The top requests according to Microsoft's feedback site are the ability to reply to specific messages in chat, and the ability to use multiple Teams accounts at the same time. Next comes a request to move channels from one team to another, and to have Office 365 group calendars.

Microsoft says it is working on all of these, and has been for some time, though moving channels is "on our backlog due to prioritization of other work items."

Custom scenes in Together Mode? Not a user priority, we'd imagine, but no doubt easier to implement than challenges like multiple Teams accounts at once.

Teams is, under the covers, built on multiple Microsoft technologies including SharePoint, Office 365 Groups, and Azure Active Directory. Integration with these systems is its strength but also its weakness, for those who would like it to be a more general-purpose communications platform.®