Who gave dusty Soviet-era spacecraft that unwanted lick of paint? It was an idiot, with a spraycan, in Baikonur

'This is why we can't have nice things'

A further indignity has been heaped upon Russia's Buran Space Shuttle as images surfaced showing at least one of the surviving Soviet-era spacecraft was defaced by a graffiti "artist".

According to Google's translate tool the text states: "Before climbing to the stars, a person should learn to live on Earth!"

Buran defaced! Such BS. This is why we can’t have nice things.
(Photos via Instagram) pic.twitter.com/jeacblXBcl

Ironic, considering that neither of the vehicles languishing in the Baikonur hangar on the steppes of Kazhakstan, where the Roscosmos spaceport is located, have been anywhere near the stars, let alone the open air, for years.

The Buran programme was the Soviet Union's take on NASA's Space Shuttle. Rather than returning the engines to Earth in the tail, the Soviet craft was to use an expendable Energia rocket to loft the vehicle to orbit. Smaller rocket engines would then take care of manoeuvring and de-orbiting the spacecraft. The glide back to Earth and landing was then to be automated.

As it transpired, there was only ever one launch of the orbiter, in 1988, before the programme was canned in 1993. The flight was uncrewed and is well documented in Bart Hendrickx and Bert Vis' excellent book Energia Buran, along with the development, turmoil and cancellation of the project.

Two orbiters are stored within the Baikonur hangar: an almost complete spacecraft, the second 2K prototype, and the OK-MT engineering mock-up. It looks like it is the latter that has had its paintwork updated, although there is every chance the paint might peel off, considering the dust and debris coating the abandoned vehicles.

One of the missions planned for 2K was a docking with the Mir Space Station, which was eventually performed by a US Space Shuttle. The only orbiter to fly, 1K, was reduced to scrap when the roof of the building housing it collapsed on 12 May 2002.

The decaying spacecraft have been documented over the years by trespassers venturing inside the structures. Other test articles have variously been sold or destroyed over time; indeed, this hack had a delightful wander around the preserved atmospheric test vehicle, OK-GLI, which is on show in Germany's Technik Museum Speyer. 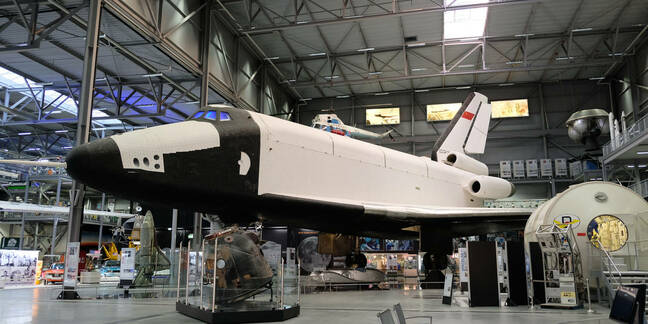 The OK-GLI (Buran Analog BST-02) test vehicle in Speyer, Germany (the original is the one that was spray canned)

The Register spoke to both Matt Haskell and the source of the tweet, and were directed to the group thought to be responsible for the graffiti. We will update should we receive a response.

In the meantime, Russian space agency Roscosmos has announced plans to raise the issue of preservation of the artifacts at the next meeting of the Intergovernmental Kazakh-Russian Commission on Baikonur.

One hopes there will be some movement on preserving what is left of the programme before long. Otherwise it might be only the graffiti that remains. ®