Japan’s Aerospace Exploration Agency (JAXA) will send a transforming robot to the Moon.

The space agency announced its plans and revealed the design depicted below today. You’re looking at a device JAXA says will be 80mm in diameter, before transformation, and weighs in at 250 grams. 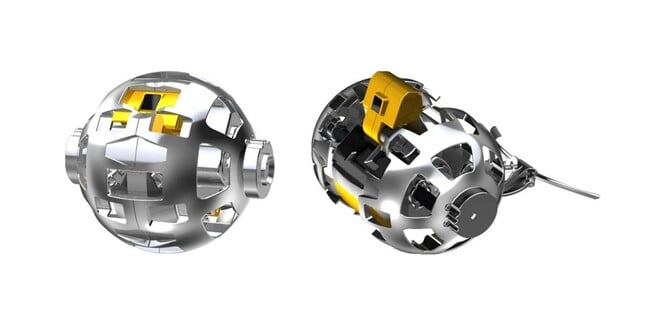 JAXA’s design for a transforming moonbot.
Click to enlarge

The ‘bot will travel to Luna on a 2022 mission conducted by Japanese space upstart ispace. JAXA suggests the device will be spherical at launch, then “transform into a running form” depicted at right in order to trundle about the surface of the Moon on a mission to ascertain what it will take to build a larger, pressurised, vehicle capable of carrying crew on the moon.

JAXA and Toyota have teamed to make what The Register likes to call the “Space HiAce” a reality, as part of Japan’s contribution to the Artemis project.

Buggy-building efforts to date have determined that more data about local driving conditions is needed to design a viable vehicle.

The lunar transformer’s mission is therefore to send home data that can be used “for evaluation of the localization algorithm and the impact of the regolith on driving performance of the crewed pressurized rover.”

The ‘bot incorporates miniaturization tech from TOMY Company and Doshisha University, control tech from Sony and JAXA’s expertise building stuff like probes that land on asteroids and bring bits of them back to Earth. ®

Fancy being an astronaut but didn't go to uni? Your time may have finally come

'Avatars' that roam around space station, or do work with high performance hands, to be controllable from the ground
Science27 Jul 2021 | 6