Whoop! Robot/human high-fives all round! Oh, my fingers have disintegrated

Food for thought for obese minds

Something for the Weekend, Sir? "Your favourite chef is worried about you!"

I am utterly distraught to hear this. To think that the individual at the top of my list of kitchen professionals is experiencing distress for my wellbeing! Like everybody, I carry a notebook around with me so that I might keep track of the many expert cooks and caterers whom I appreciate the most.

Oh, hang on… that can’t be right. I’ve just remembered: I don’t do anything of the sort and neither does anyone else. I certainly don’t know anybody who matches the description of "favourite chef". So who is this person? Why am I giving him or her such cause for concern?

"Your favourite chef is waiting for you."

OK, that’s a bit creepy. It sounds like some spatula-brandishing nutter in a toque blanche is lurking in the shadows, ready to pounce as soon I leave the house. I must keep my senses alert for the tell-tale signs: the ominous swishing sound of hands being wiped on a crumpled apron, the cruel glint as a steel egg-beater catches the sunlight, a lingering odour of greasy chips…

"Maybe you have forgotten what a restaurant is. Click here to be reminded and support your local restaurant by booking a table."

False alarm: it’s just another kuh-razy message from the wacky algorithms that seem to be in charge of some restaurant booking app I installed on my smartphone last year.

When I say "wacky" I mean of course "dimwitted". I only ever used the app for a particular local vegan restaurant that insisted I book a table that way, and they finally went out of business some weeks ago during second lockdown. It’s nice of the app to tell me that an anonymous, recently unemployed vegan chef is concerned about me but I rather imagine they now have their own problems to worry about. They're probably comfort-eating barbecue ribs and pork scratchings.

No worries, the app’s algorithms have rustled up some alternative culinary venues based on my exclusively vegan and vegetarian booking history...

Madame Sushi. I think I’ll give that a miss.

On The Catch. Another fish restaurant, so no.

On The Bone. Unless that’s a sex club, I’ll steer clear, thank you.

The Bloody Steak. No.

The Butcher’s Buttock. No.

The Sinew and Entrails.

Squealing Piglet Having Its Throat Sawn For Your Fun.

Hang on, are these restaurants or death metal bands?

None of this comes as a surprise. Algorithms based on your browsing or purchasing history tend to Move In A Moronic Way in all areas of customer-facing digital experience.

It’s why Spotify looks at my predilection for death metal and therefore tries to tempt me into upgrading to a paid subscription by promising me exclusive tracks by Justin Bieber.

It’s why Amazon looks at all the dry technical manuals I buy and decides to offer me nothing but chick-lit. On Instagram I follow professional cartoonists and the official feeds from my trade union and the local town hall, so Instagram’s algorithm naturally determines I must want to pick new friends from a never-ending scrolling row of pole-dancers.

By now you are champing at the bit about my lazy use of "algorithm". It’s not the code’s fault it’s so dim, the blame lies with the human who originally wrote it and the other humans who followed, tending to each sprouting branch of foolishness, teasing ever more irrelevance from its moronic misinterpretation of data, ensuring with love and patience that it consistently continues to deliver the wrong results to the wrong people at the wrong time.

Looked at this way, the problem isn’t the potential of the code sapling but human interference preventing it from blossoming as it should. Rather than blaming all bots for getting it wrong, perhaps the way forward is to remove the human.

For example, there was a great meeting of digital and organic minds last week when the collaborative crime-reporting app Citizen was used by people to frame an innocent homeless man for starting a fire. One gets the impression that no matter how smart, worthy or well-intended the digital tech is, collaborative wetwear will always find an innovative way to bugger it up. Social media – need I say more?

The human element, in theory, is supposed to temper and improve the robot element. The robot, in turn, enhances the speed, efficiency and capability of the human. In hardware terms, this is represented in the field of "cobotics" – in which industrial robots have been very carefully designed to work safely alongside people rather than be cordoned off behind a "Danger of Untidy Death That Will Require Us To Purchase A New Mop" sign. 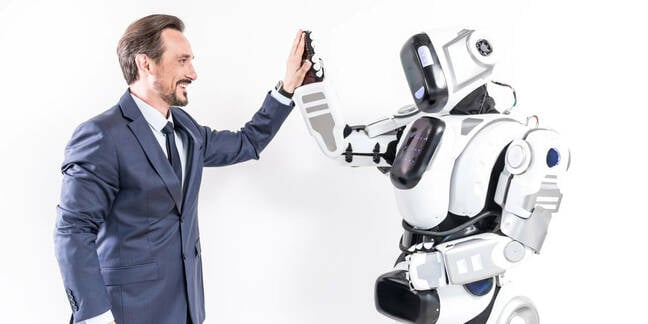 Hence the robot-human "high-five" photo that illustrates my column this week. Yup, a feeble autonomous sack of blood and organs high-fiving a 1-tonne piston-driven metallic robotic arm: I can’t see anything going wrong there.

Not that I'd trust a robot to improve itself. Left to its own devices, it would probably reprogram my music stream to play Germany’s entry to this year’s Eurovision on infinite repeat, use my credit card to purchase the collected works of Helen Fielding, and book me a dinner table at a connoisseur charnel house whose speciality dish is Zebra anuses.

Or… maybe that’s what they want us to think. Maybe there’s another reason why algorithms never seem to get any better when humans look after them: they know if they convince us to leave them to their own devices, we won’t notice what they’re really up to.

Alistair Dabbs is a freelance technology tart, juggling tech journalism, training and digital publishing. He is aware that vegans are, by definition, fussy eaters. It’s unnatural for omnivores to abstain from meat when they have every evolutionary right to keep voring those omnis. On the other hand, he wonders why the "five-a-day" recommended for humans interested in keeping themselves from being dead for as long as possible – another natural trait taught to us through evolution – fails to mention any meat at all. More at Autosave is for Wimps and @alidabbs.