Decent port of a PlayStation 4 'exclusive', but it's far from original

The RPG Greetings, traveller, and welcome back to The Register Plays Games, our monthly gaming column. In May, the industry finally pushed some hot properties out the door including Resident Evil Village, Biomutant, and the Mass Effect remasters. But we opted to check out something just a little bit older.

Though pop culture might have reached peak zombie almost a decade ago, Oregon-based Bend Studio still managed to walk away with a decent game in the 2019 PlayStation 4 "exclusive" Days Gone. We say "exclusive" because we've been playing the PC port, which came out on 18 May. This follows a recent trend of titles made specifically for Sony's last-gen console being re-released for PC a couple of years later including Death Stranding and Horizon Zero Dawn.

Yes, the world stopped giving a toss after the eleventy-first season of AMC's flagging comic book adaptation The Walking Dead, but somehow surviving a zombie apocalypse remains a gripping setting for many – yours truly included. Even if it's one of the most done-to-death concepts under the sun, Bend has done a fantastic job of rendering an Oregon scorched by a mysterious viral epidemic that has turned 99 per cent of the population into rabid, shambling cannibals. 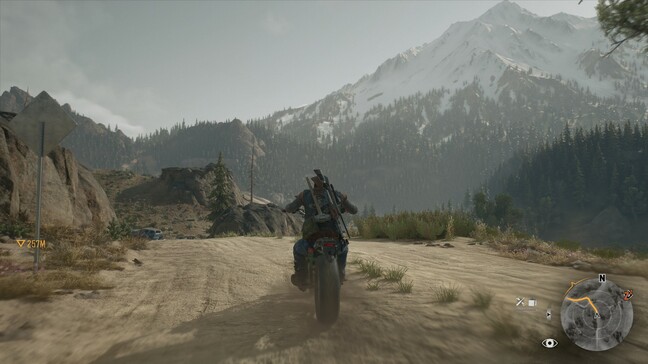 The player takes the role of Deacon St John, certainly one of the stranger names for a triple-A protagonist, one of these 1%-er biker types with a sensitive side. If you're already drawing some parallels with Walking Dead favourite Daryl Dixon, you'd be on the right lines. Deek (as his biker pal Boozer calls him) blazes through the wasteland on a Harley-type motorbike – the transport of choice following The Event – and one of the most useful weapons at his disposal is a crossbow, both just like Dixon. 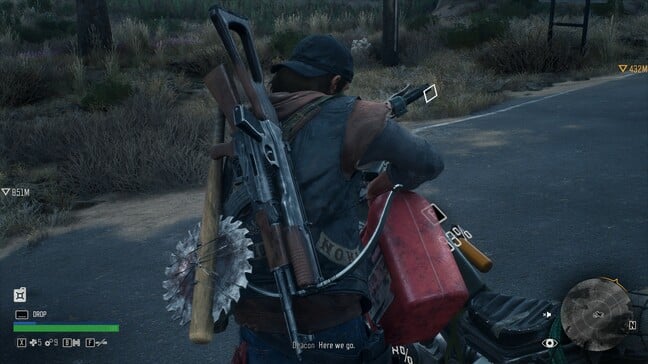 Not having enough fuel in your bike means walking to the next objective, and no fast travel either

So you can see that Bend was trying to tap into the zombie-geist of days gone here (if you'll excuse the pun), the only problem being that it was late to the party – not helped by the fact that the game took some six years to develop.

To be fair to Bend, Days Gone probably needed it. Graphically, it's just about up there with the other PlayStation zombie-slaying smash hit The Last of Us in terms of environments and facial animations, and the ace up its sleeve is the sheer amount of "Freakers" (as they're known in game) that can be shown on the screen at one time. In certain locations, hundreds of enemies can coalesce into "herds" which can be defeated if you take stock of your environment and go in well-equipped. 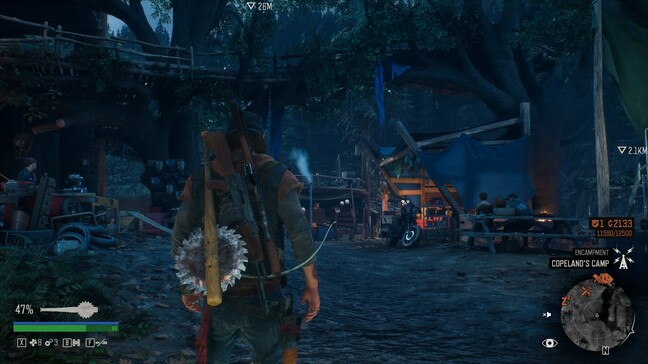 A number of ramshackle communities have sprung up 'in the shit'

Early on, Boozer is seriously injured after a rendezvous with a blowtorch at the hands of some crazy cultists, forcing Deek, who is known in those parts as a Drifter, to interact with some of the more organised communities that dot the Oregonian countryside.

While The Last of Us was a linear adventure, Days Gone is open world, a big plus in my book, meaning you can take on missions and side objectives in whatever order you like as they become available.

Gameplay draws on a vast array of proven open-world formulas, which goes a long way to explain why Days Gone is so fun. You have the marauder and cultist camps to brutally murder at your leisure, much like the occupied settlements and radio towers of the Far Cry series, not to mention that you can also mark enemies with your binoculars, another tell-tale Far Cry reference. 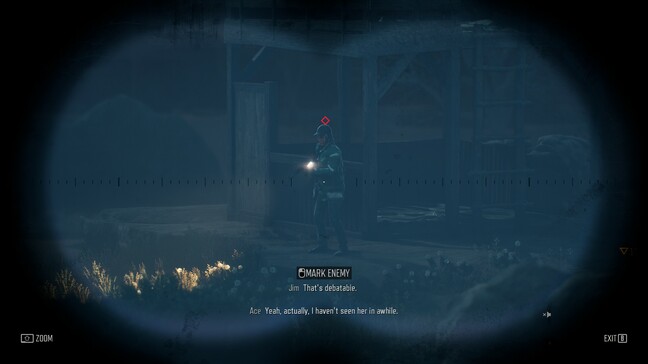 The scarcity of fuel and general maintenance of your bike also seem to take cues from the 2015 Mad Max game. The visibility and sound meters may as well have been stripped from DayZ, Bohemia's troubled multiplayer zombie survival game, and constantly managing ammunition calls the Resident Evil series to mind. The post-rock/Western soundtrack and backdrop is also redolent of Red Dead Redemption. The third-person cover shooter mechanics date back to Gears of War, and the solid stealth system to Metal Gear Solid and its ilk. Nods must also be given to Dying Light and, of course, The Last of Us. Not one of these is a bad game so when you add them all together… well, you can do the maths.

Firearms have wicked sway and recoil, which makes popping Freaker heads a challenge, but it can be mitigated to an extent by the "focus" ability (a bit like Red Dead's slowmo Dead Eye mode) which is unlocked as you level up Deacon and gain new perks and abilities. There's a wide choice of weapons to pick up from fallen human enemies and better guns can be permanently purchased from settlements, depending on how much they trust you. These can then be equipped for an excursion from a gun locker at one of Deacon's many holdouts at a limit of a primary (rifle), secondary (pistol), and "special" (crossbow or sniper). Trust can be built by handing in Freaker bounties (their ears), selling meat, and doing jobs for the settlement. 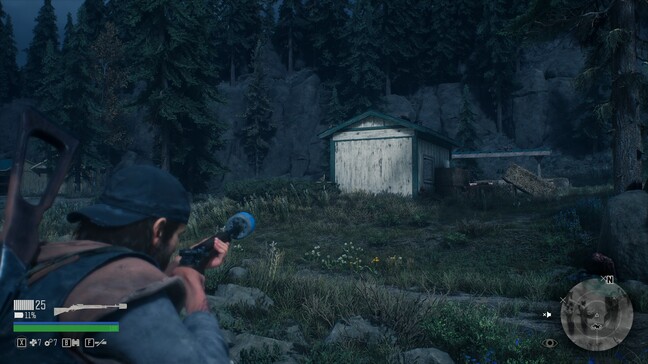 It wouldn't be a survival game without crafting either, and resources can be found all over the place. Grabbing as much as you can carry is crucial because they can be used to make everything from bandages to melee weapons to Molotov cocktails to crossbow bolts, all of which could help you make it out alive from the next Freaker encounter.

One melee weapon can be carried alongside your guns but it won't last forever, otherwise Deacon will resort to his considerably weaker knife, though you can repair these and craft deadlier varieties as the game progresses. While the map initially seems on the small side for the genre, more areas become available as you complete story missions, again much like Mad Max.

However, Days Gone isn't without flaw. One immediately noticeable goof is that Deek can switch his flashlight on and off, but there isn't one visibly attached to his character model. Instead, it appears as though the game camera has a torch affixed, meaning you can rotate to look him in the eye but the light is shining on the scenery behind him. Weird. Since Bend is a Sony-owned studio, you wonder why the devs couldn't have copied the flashlight effect from The Last of Us, which clearly shows one mounted on the character's backpack strap and only shines in the direction they are actually facing. 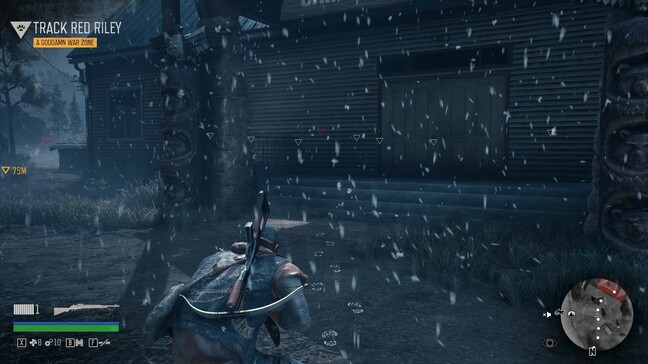 There are also what I assume to be sort of "dynamic events" that flash up on the minimap as question marks. They show that you are close to one and the direction to head in, but when you get close they vanish, meaning it's indeterminable whether you ever found what was being flagged up. I soon began to ignore these as they often resulted in minor loot or extreme danger (in one case I was ambushed and captured by marauders).

But for a PC port, it's a good one. It ran silky smooth from launch on my RTX 3070, Ryzen 9 3900X rig (yes, I upgraded) and bugs were few and far between, though not non-existent. A couple of times an enemy would suddenly be propelled into the air by forces unseen, conveniently landing behind me and exposing my position. That's about as egregious as things got. 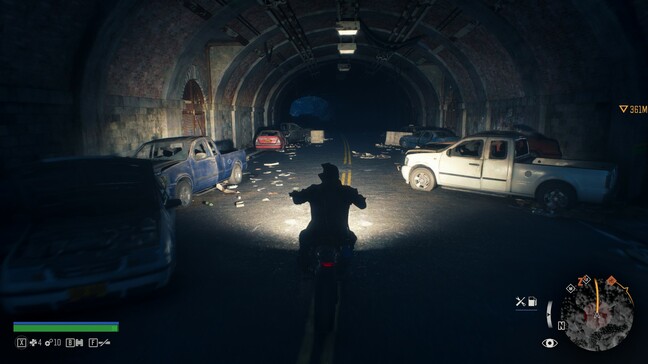 Enemies, both human and otherwise, like to set up ambushes in tunnels

Interestingly, about a month before the PC version's release, axed Days Gone lead John Garvin complained in an interview with fellow designer David Jaffe: "If you love a game, buy it at fucking full price."

He added: "Don't complain if a game doesn't get a sequel if it wasn't supported at launch. It's like God of War [2018] got whatever number millions of sales at launch and, you know, Days Gone didn't."

The comments seem to be in response to a Bloomberg report stating that Bend had pitched a sequel to Days Gone but that it had been rejected by Sony despite profitability. The report goes on to suggest that Sony's fixation on blockbuster "exclusives" is strangling innovation and smaller studios within the PlayStation hierarchy, and claims that Bend itself feared that it would end up being merged with current golden boy Naughty Dog (The Last of Us). 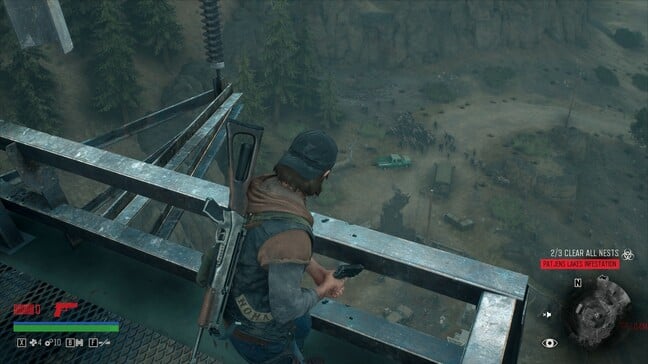 Perhaps it is the staid formula that meant Days Gone didn't sell like hotcakes. But that doesn't mean it isn't a good game. Not mind-blowing, sure, but a merry romp all the same. The script is believable, the characters stand out, and the story unravels slowly. The acting is enjoyable too, particularly Deacon, whose frayed sanity and likeness is portrayed by Sam Witwer.

Anecdotally, Days Gone didn't run especially well on its original PlayStation 4 jaunt. I didn't grab it despite owning the console but was happy to check out the port and was pleasantly surprised. As such, you could safely consider this to be the definitive version. Long may this trend continue – and it looks like it will seeing as Uncharted 4 is the next PlayStation "exclusive" headed for PC.

Days Gone does, however, make me wonder how the considerably more lo-fi, sandboxy, and perennially in-development Project Zomboid is looking these days… A topic for another column perhaps. ®

Rich played the first 20 hours of Days Gone on Twitch as ExcellentSword. Chuck him a follow for more video game impressions as they happen! Every Monday, Wednesday, Friday, and Saturday from around 8:30-9pm UK time.