The packaging technique was revealed in a keynote address to the virtual Computex exhibition delivered by AMD president and CEO Dr Lisa Su, who said the technology bonds “64MB of 7nm SRAM cache directly onto each core complex, effectively tripling the amount of cache feeding our Zen3 cores.”

Signals and power pass across the silicon, and Su said the result is more than 2TB/s of bandwidth with superior thermal performance, a 200x improvement in interconnect density, and 15 times better density than other stacking technologies.

AMD’s approach to stacking uses a direct copper-to-copper bond, instead of silicon microbump tech used by other players. One result of this approach, Su said, is that AMD's chips will use a third of the energy required by rivals.

Su said the tech is currently targeted at gaming and will go into production on AMD’s highest end products by the end of 2021. 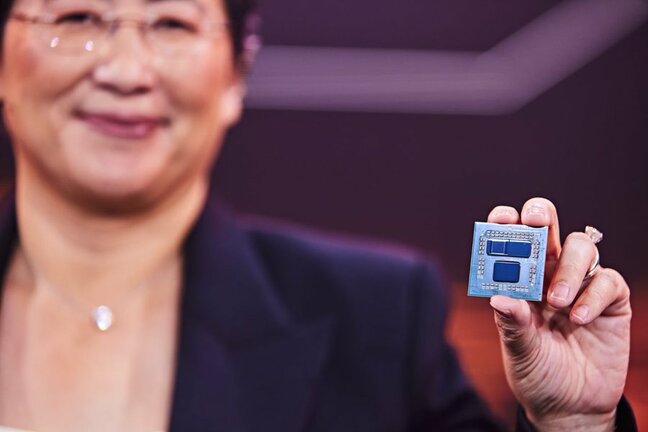 “It averages 15 per cent improvement at 1080p just from 3D V-cache,” she said, showing off an unspecified 5000-series Ryzen CPU built with the tech.

The CEO pitched this 3D V-Cache as "bringing the best to high-performance computing." Su offered no detail on when, or whether, the tech might appear in silicon tuned for applications beyond entertainment.

Su also touched on new desktop processors, including a G and GE range of Ryzen Pro silicon. The half-dozen components boast either four, six, or eight cores, and base clock speeds from 3.4GHz to 4.0GHz. The CEO also revealed a pair of processors for the enthusiast market, in the form of the Ryzen 7 5700G and Ryzen 5 5600G, each of which integrate Radeon graphics and Zen3 cores.

Desktops and business users were, however, very much an afterthought in the keynote. Su’s focus was on gaming laptops, and she delivered news of a new “AMD Advantage design framework” that offers a spec that lappie makers can implement and then slap a logo on their hardware to inform gamers they’ve done what AMD says is necessary to make speedy machines.

The CEO also revealed Radeon RX 6000-series graphics cards for laptops, without a hint they may make their way into mobile workstations.

AMD’s Epyc server processors were given the opening few minutes of Su’s presentation, and she used that segment to trumpet their performance when compared to Intel Xeons.

Su felt like she was going through the motions during that section though radiated more enthusiasm when revealing that the infotainment systems in the Tesla Model S and Model X are powered by a Ryzen chipset that includes AMD’s RDNA 2 graphics architecture.

Su said Samsung will reveal its RDNA intentions soon. The Register has heard Samsung emphasize 120Hz screen refresh rates in its flagship devices as delivering a great gaming experience, even in its business-oriented Note devices, so expects the Korean company will use its AMD alliance to again position its devices for entertainment applications. ®